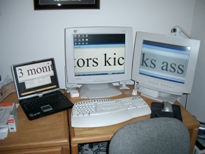 Comment on this post [19]
Share on Twitter or Facebook or use the Permalink
June 09, 2004 7:37
I still really like my CRT. It seems to me that a LCD would be great for work where I would never change resolutions, but at home I run a hodge-podge media center edition PC (The MSDN edition of course because I have aspirations to write some code for it) and it changes resolutions quite often. When I switch to the 10-foot interface and when I load games I tend to run a different res than I use for normal computing.

Josh Baltzell
June 09, 2004 7:51
I still run 3 21 inch Sony Trinitron Flat CRT's. When you go any kind of graphics work and want to be able to see the true color of what you're doing, LCD's still don't cut it. They're getting better, no doubt, but they still don't compare to CRT's. And yeah, 3 21" Trinitron's really take up desk space but I've figure out how to manage with KVM switches and all that kind of junk.

G. Andrew Duthie
June 09, 2004 8:05
LCDs are typically lower res, and nifty in a space saving way. They get streaky like you described sometimes when they're crapping out on ya. The same money you spent back then would buy a much better model today, probably would last longer, but then again, the same money toward a CRT model would buy a whole *lot* of quality monitor.

Greg Hughes
June 09, 2004 8:25
To answer your last question - yes. There was some discussion of this on the WinTech-OT list back in February, and at the time I was one of the few CRT holdouts (or one of the few prepared to admit it). Sony 21" flat Trinitron for me too, and I'm not about to switch to LCD. They simply don't have the resolution or color fidelity that I want.

Sean Malloy
June 09, 2004 8:51
Count my vote for CRT over LCD. Every once in a while I browse around Fry's, looking for an LCD that will cause me to make the switch, but it hasn't happened. The LCD screens just aren't as clear as a CRT. Your monitor is very important to your comfort. I'm still happily using my 1995 Samsung 17GLsi CRT without a glitch.
Seems LCD's are for people that have more money than physical space.

Joshua Flanagan
June 09, 2004 8:52
Count my vote for CRT over LCD. Every once in a while I browse around Fry's, looking for an LCD that will cause me to make the switch, but it hasn't happened. The LCD screens just aren't as clear as a CRT. Your monitor is very important to your comfort. I'm still happily using my 1995 Samsung 17GLsi CRT without a glitch.
Seems LCD's are for people that have more money than physical space (and judging by that photo, it looks like you fit squarely in that market).

Rob Boek
June 09, 2004 10:15
I always thought I would prefer a big CRT over a LCD, until I decided shell out the bucks to get a really nice LCD. Now I don't think I could go back. IMO, it all comes down to you get what you pay for. Most people that buy LCDs get the lower quality ones because the price is already higher than what they'd pay for a CRT. Of course then they'll complain about how CRT are better (well, they're right that CRTs are better than the LCD *they bought*). I was sick of the bulcy space taking CRT and the heat so I decided to go for it. I spent a lot more than I would have normally on a LCD and I love it. It's a really expensive monitor, but I cannot get the same clarity and color on my best CRT, not even close! That said, if you want to play games on it, then there's no beating a good CRT.

Ryan Farley
June 09, 2004 14:58
Strong yes for CRT vs LCD. If you work with 3D graphics/engines (or just simply play PC games) LCD is not there yet. They solved many problems with refresh rates, blur, after-images over last few years, nevertheless its still noticable to professional eye. Trying out DOOM3 on LCD would count as sacrilege ;)

theCoach
June 09, 2004 18:03
Price nonwithstanding, has anyone of you take a look at Apple's 23" Cinema HD Display (http://www.apple.com/displays/acd23/)? Granted it uses Apple's ADC connector but rumor is that an update is soon to be released with standard DVI along with a 30" model. See http://www.thinksecret.com/news/newdisplays.html

Alex
June 09, 2004 19:17
The only really clear LCD display I've seen is the one on my IBM ThinkPad, and only when I'm running at the highest resolution. I had it running dual monitors with an 18" NEC LCD and the blurriness and ghosting on the thing started messing with my eyes. I switched out the LCD for a 21" Sony Trinitron CRT and have never looked back. I run the same thing at home. Until REALLY CLEAR LCD displays become reasonably affordable, I'm sticking with the tried and true. At least I won't feel like I'm going blind. (Plus, as previously mentioned, you can't beat the color on a CRT; the LCD just doesn't cut it.)

Patrick Cauldwell
October 06, 2004 6:37
I still live by CRTs because of the price. I run an ATI X800 to two 17" Sony E200 monitors and they are as crystal clear and responsive as any display I have ever seen. Now if games developers would offer more dual-display features (like Morrowind main on one display with the rag-doll, map and stats windows on the other display. Or Doom III on the left with network stats and chat windows on the right (sweet!).