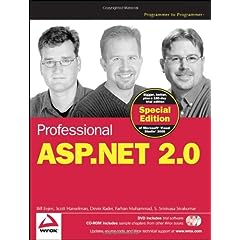 The secret's out. A 'special edition' (updated second edition) of Professional ASP.NET 2.0 is coming out in September.

It's a freaking beast. If you didn't get the book when it came out last year, now's the time to pre-order this one...

What's the difference between the first one and the Special Edition? About 300 pages of new content. It's about 1650 pages now, enough to beat someone up, if you use the Hardcover. And the Hardcover is only $37.79 to preorder the last time I checked at Amazon. Although, you could hurt someone with the Wrox Box.

Bill Evjen lead the charge on much of this new content, with Devin and I adding missing and/or new content in dozens of places throughout the book. There's an excerpt of the new section on the FileUpload Server Control up at Wrox.com.

Here's a brief list of what's updated and new in this new edition.

...and dozens of additions throughout all the existing chapters, including:

Comment on this post [1]
Share on Twitter or Facebook or use the Permalink
July 19, 2006 21:48
I will certainly order a copy of the new book. I have used and enjoyed the current version. One area that I noticed that neither your book or any other I have been able to find addresses the issues with using a data access layer in ASP.NET. You touch on using precompiled business objects, even give an example of how to compile an assembly from the command line. But every web app I have ever worked on has required resuse of complex business objects represented in assemblies, usually as class libraries. Numerous web articles discuss creating a DAL, and the pro's and con's about directly consuming datasets or datatables or using intervening objects etc.

How about some of the meat instead of the fluff? For instance, when and where should one instantiate a business object if they are not using the APP_CODE directory. How about the issues with strongly typed datasets created in your business object, and consuming them from more than one web page? Do you instantiate these beasties for every call? Should you initialize your layer once? What about in a server farm environment? Come on, tackle the tough stuff! I would pay a lot more for a book that dealt with more real world issues that effect application design.

Your book was and is great as far as it goes, but we really need a book that tackles these issues. I have read "ASP.NET 2.0 Website Programming Problem-Design-Solution" by Marco Bellinaso and he comes close but we need more!! Any recommendations?