ASP.NET has included support for "friendly URLs" for a while now. ASP.NET MVC has always supported friendly URLs and more recently, so has Web Forms. That means if you don't want to have the .aspx extension, you certainly don't have to.

However, there's a LOT of existing legacy apps out there as well as apps that you may not have full control over. For example, there's a site that I want to influence but it's got dozens (hundreds) of links to foo.html and bar.html existing pages.

What I want to do is kind of sloppy and I'm doing it for aesthetic reasons. I'll hopefully get around to updating the site's links later and know that future links will be extensionless. But look at me, I'm justifying why I'm doing this, Dear Reader. You of all people know that sometimes you just gotta do something just because ya gotta Get It Done™©.

I can do all this within my web.config using the IIS Url Rewrite Module.  I can do this with ANY file type that IIS can handle, meaning this isn't an ASP.NET-specific thing. This all happens well before your application gets involved. You'll note I did a similar thing with a PHP app running under IIS just last month.

Here's what my web.config looks like. Note that since I have Azure (or in just IIS 7+ and the Rewrite module) I just added this file. There was no configuration needed. The same would apply to any existing site. Be aware that sometimes super-"greedy" rewrite or redirect rules can end up grabbing ahold of your CSS or JS so you'll want to be aware if something odd happens.

This stuff is hard to write, though.

SIDE NOTE: My RegEx expert Ruslan points out that the final Action could be simplified slightly like this:

This stuff is also hard to test. The IIS Rewrite module has a great UI for IIS that will write a lot of these rules for you and let you test them interactively: 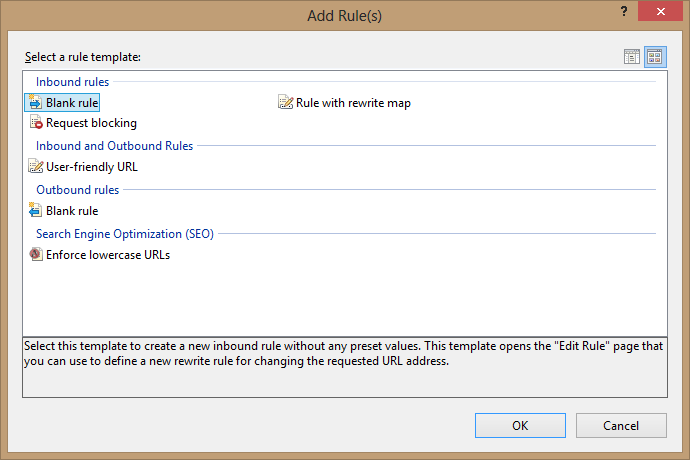 Hope this helps. I wrote this post (and bookmarked it) for myself because I am always googling around for this particular rule to remind myself. Now I'll search my own blog. ;) Reason #64 to blog, friends.

SPONSOR: Big thanks to the feed sponsor this past week, Ext.NET (seriously, check out their demos, really amazing stuff!) - Quickly build modern WebForm and MVC (including RAZOR) Apps for ASP.NET. Free pancake breakfast with all purchases!

Legacy(n): An educated way of saying: Cr*** that we didn't write, is very bad code, are not responsable for and want out the door asap, but the manager doesn't let us rewrite it.

Kenneth Truyers
May 10, 2013 23:27
I was seriously just looking for this! Thanks for all the work you put into this blog. I hope you know your it's appreciated!

Bryan
May 11, 2013 2:01
What are the SEO implications of such a rewrite? Does the redirect respond with the correct headers for a permanent redirect?

Scott Hanselman
May 11, 2013 11:37
One thing - that IIS Url Rewrite editor is very nice. But, these days, few of my sites run locally on IIS, most now use IIS Express. That means I cannot use this editor directly. And Visual Studio doesn't even have Intellisense for URL Rewrite. Currently, I have a dummy site in IIS that I use to set up rules and then I copy the XML over (or I try to write it by hand, if I can remember the correct syntax). Surely there has to be a better way?

Nick Delany
May 11, 2013 19:52
Maybe it's just me, but your rules seemed to be named backwards. I would expect the "extensionless" rule to do the rewrite to the file with the extension and the "removeextension" rule to, well, remove the extension and do a redirect.

Tim VanFosson
May 12, 2013 11:38
Another useful tool when debugging rewrites is the failed request tracing in IIS. You can see each rewrite rule as it processed. Very useful.

Jeff Cuscutis
May 12, 2013 14:59
Nick, if you're using II6 then check out Ionic's IIRF ( http://www.codeplex.com/IIRF ). I wrote an article a few years ago with a working example of IIRF in action... http://swortham.blogspot.com/2008/12/redirecting-default-page-defaultaspx-to.html

Steve Wortham
May 13, 2013 13:41
Your blog is never fit for a mobile device. any code section added always gets cut. hope u will do sumthing about it soon.

Joe
May 13, 2013 16:44
Naveed and Joe - Yes, I designed this with @jzy to absolutely look great on mobile. You can touch scroll horizontally within code blocks.

Scott Hanselman
May 13, 2013 16:55
I was initially using my Nokia E-500 and now I am using Samsung Galaxy Y (Android) mobile. Same result on both the code sections are always cut and I can not scroll horizontally on my mobile device...

Wade
May 14, 2013 20:34
Thanks for this article, good knowledge. I hope the irony isn't lost on you that this post is delivered with an "aspx" extension! .LOLz!