Review: Pleo gets sent back to the Dinosaur Pound 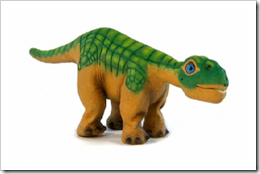 UPDATE: In record time, Sarah from Ugobe included feedback in the comments below. Just be clear, I was reticent to do a review at all, because I know how much work goes into things like this, especially for a small startup that pours their hearts into a product like this. It just turns out that it wasn't for me, and I had high, perhaps unreasonable expectations that weren't met. That said, please do read Sarah from Ugobe's thoughts in the comments below.

I've always wanted a little robot, maybe a dog or something that would wander around the house and be charming, but wouldn't require, ahem, care and feeding. I have enough trouble keeping myself and my family fed, the last thing I need is an actual animal to keep alive. I'm not a dog or cat person, sue me. ;)

Anyway, the Sony Aibo was a good idea, but it was (and is) too expensive (unless you, Dear Reader, want to loan/sell me your Aibo?) for my tastes.

This Christmas I got myself the family a Pleo baby dinosaur using blog money, although the WAF on this one was at a new low. Seriously. But, I persevered.

Again, as with the iPhone, the Wife was correct. 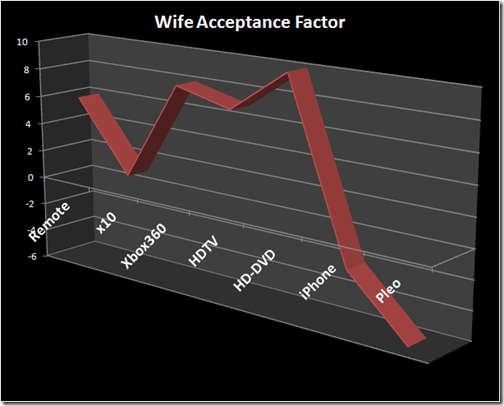 What a profoundly disappointing toy. To be clear, it is a toy and an expensive one at that. Fortunately The Sharper Image has a good return policy.

Perhaps I would have enjoyed it more if it were faster, quieter, more interesting, but even my 2 year old grew tired and frustrated with it as it didn't "engage" or seem to notice he was there as he tried to feed it the plastic leaf it comes with. As soon as it failed to connect with him, that was the end of Pleo. Maybe I'm being too harsh, but I had high hopes and was very bummed by this whole thing and won't make this mistake again.

If you can borrow or rent or observe one first, I'd really recommend caution with this robot.

Sorry that Pleo wasn't your cup of tea. We definitely read reviews like yours and take them to heart and of course are content to take your return since it didn't work out!

We have tried hard to be clear on our website and in our communcations with registered customers and the press that Pleo's software is actively in development. We plan to release a minor upgrade in the *extremely* near future and a major one later this spring that will improve his performance, cease the "narcolepsy" and make his personality more adaptive and fun.

The PDK will be released in a few months. We expect a lot of fun work from third party developers. We have already seen the launch of two 3rd party modding envronments written by AIBO developers - MySkit Performance Editor for Pleo as well as YAPT. The robotics community has responded enthusiastically.

Again, though, Pleo isn't for everyone at this stage in the game. I'm glad you got to try him out and we really are listening - so feel free to share your thoughts in this space about features that you think folks would like to see.

ugobeSarah
January 30, 2008 7:13
I really wanted a Pleo, but my owners have said no for now.
Looks like they may have been right.
That said, I have all kinds of fun adventures without them.

Schnubbs
January 30, 2008 7:16
sarah, you mention the PDK...this sounds interesting -- are there details around the PDK and what it will enable. will any of the microsoft robotics tools be helpful in writing applications using the PDK?

glx
January 30, 2008 11:13
I am not surprised the batteries life suck because of all the motors and sensors in this thing. I thought the WTF would be higher for this one because it could have been a nice toy for the kid too.

I hope Ugobe works the kinks out... and try to lower the price.

Abdu
January 30, 2008 11:52
The PDK will come later this spring. Your question about MS robotics tools is a good one and I just don't know - I will forward that along to the engineering head on the PDK project and get back to you in this space.

There's a fair bit of discussion about it in our Forums if you're interested in following it there, and I can tell you that we're about to launch an introduction to what's forthcoming in the toolkit on a new "Developers" page on the website. There are some sample scripts (Python, Pawn) and information about Pleo's sound and motor systems, and a diagram of the Life OS architecture for your degustation. Should go up within the week if the elves can kick it out...

daniel
January 30, 2008 19:54
This sounds EXACTLY like the experience we had with the "WowWee Roboreptile Robotic Reptile." Talk about a waste of $100.

WHAT IS THIS?! After reading Rob's recent blog post I assumed that this Scott Hanselman was an incredible BAD ASS who wouldn't take any heat from the "Red Shirts", and yet after *obviously* exposing a sub-par product with numerous issues, he turns all nice under the lights of public scrutiny?! I expected a nastier, angrier, dick of a Hanselman...I wanted to blog about how awesome Scott was as he RAPID FIRED OFF his rebuttal to the Dino-PR person and after she replied with a "Yeah, gee, I never thought about it that way" would finish with a "That's Toy-User-Acceptance-Testing-Baby!"...but I see that's not to be. FOR SHAME Scott...for shame. Justice was so wrong about you...my faith is shattered.

Scott Hanselman
January 30, 2008 21:13
I had an aibo for about a month - also from Sharper Image. I couldn't justify the $1800 plus it didn't work well on carpet or in dim light (which was most of my house). But nothing compares to the aibo. Since then, I've pretty much given up until they start making something more like the aibo.

If it's not already started, I'm thinking the Silverlight WAF chart generator!

Maybe even get a little kick back and sell the concept to xceed ;-)

borrow or rent or observe one first

I'll be sure to do that next time I am at my local robot dinosaur lender/renter/zoo. :-)

Justin Etheredge
January 31, 2008 3:06
Forget the dino - you need to get yourself a TARDIS :) Even if you don't want the sounds and lights it makes a great ornament...

Chris Cavanagh
January 31, 2008 7:36
I'm with your wife on this one, Scott. An Aibo? A Pleo? Robots = impersonal, not cuddly, no personality. Incidentally, these are among some of the reasons why I refuse to let Justice convince me that we should have robot Astro-children instead of real ones. ;)

Mrs Loquacious aka Mrs. Gray
March 20, 2008 6:08
my pleo is constantly asleep? i have tried everything to wake him up, he just snores, any tips?