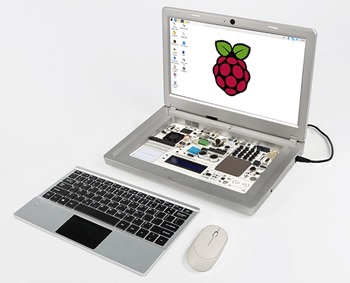 I love the Raspberry Pi and I am a fan of the CrowPi from Elecrow. I have two of their first CrowPi device and I use them in demonstrations and talks all the time, especially when talking to students.

They have a Kickstarter ending this week for the new CrowPi2. It's an update of the original CrowPi which was basically a Raspberry Pi in a tiny suitcase...instead the CrowPi2 looks like a laptop! The magical part is that the full exploration and sensor board is hidden underneath a wireless keyboard with trackpad, held on with magnets!

The CrowPi folks sent me an early CrowPi2 because I was a vocal supporter of the previous version, so I did a LIVE video unboxing on twitter as well as a follow up software video on the CrowPi2. I am not being paid for this review and I always am honest with y'all about the stuff I like. I plan on buying a few for my kids' public school science class. 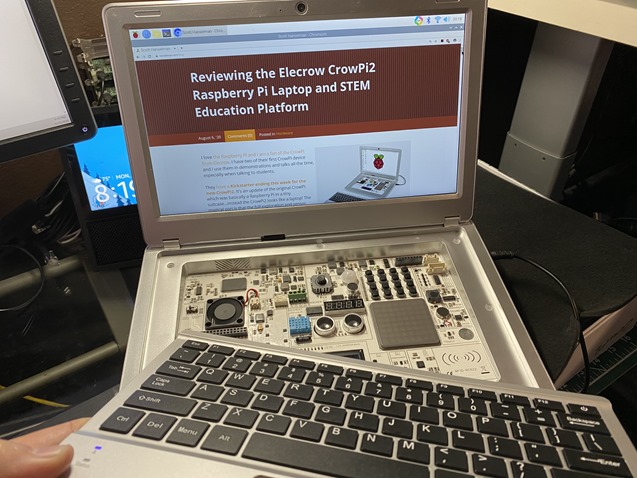 It's more than "just a laptop shaped case" for the Raspberry Pi, the CrowPi2 has an integrated 1080p screen, 22 onboard sensors (that can be connected and disconnected with a switch), a microphone and 2MP webcam, speaker, as well as support for both 5v battery and 12v external power.

The keyboard is also quiet clever and very thin. It's held on with magnets and is charged with any micro-USB connector. Hidden underneath is an upgrade of the original CrowPi sensor board! 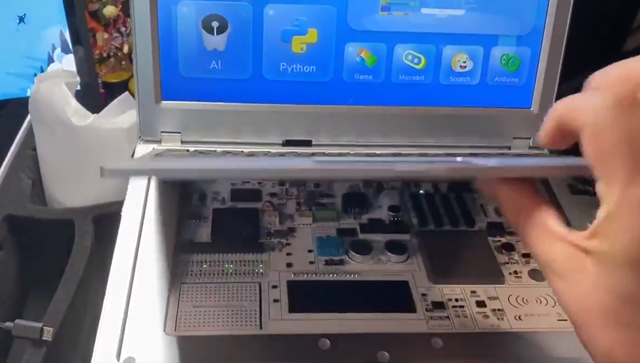 Here's a close up of the sensor board: 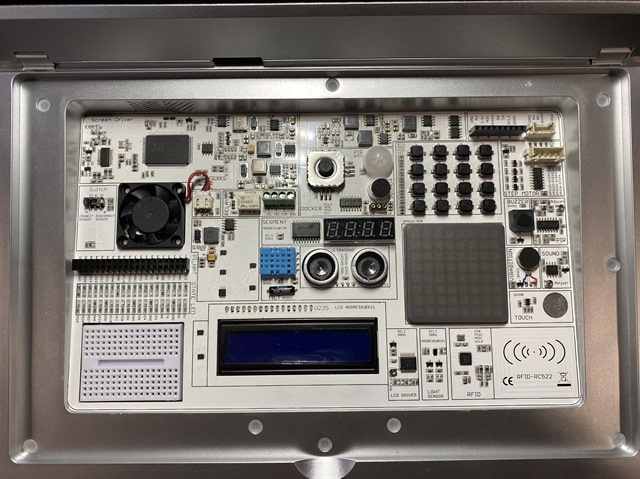 The part I was the most surprised with was that there's 20+ projects already setup out of the box. I usually get a device like this and maybe there's some sample code on the desktop that you can run with Python. The CrowPi2 is more polished in that it has a whole front-end introductory UI that lets you run the samples right away - and they are cool samples! I show a few of the LIVE samples in my Video on Twitter.

The plastic in the early version I got is a little soft, and I might have preferred it in black versus silver, but it's light and drops in a backpack easily. It's somewhat thick (remember this is a Raspberry PI, not an iPad or a millimeter thin laptop) so to be conscious if you think you're getting an Ultrabook. This is a Raspberry Pi-based laptop and learning platform. Would be a great starter for any kid as the Pi4 is pretty legit and it'll even run Chromium!

NOTE: I did try to join a Zoom web-based meeting over Chromium and while the speaker and mic were detected, I wasn't able to get Chromium to see the webcam. I'll report back on this as clearly all the parts are there to allow this little laptop to join at least a web Zoom meeting! That would be even cooler.

UPDATE! I was able to enter a web-based Zoom meeting! There's a little USB cable underneath that snakes out then in again to allow access to the webcam. Very clever! I don't think this is a reliable option for Zoom meetings, but I can confirm that the webcam works! 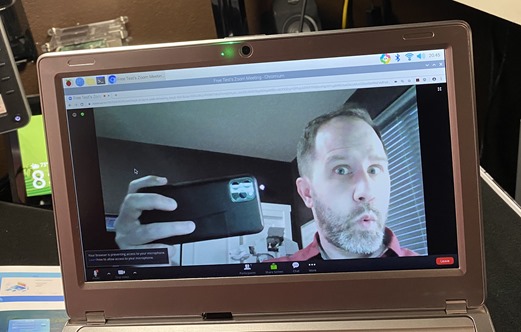 Here's a side view of the CrowPi2, as well as how the Raspberry Pi mounts inside. 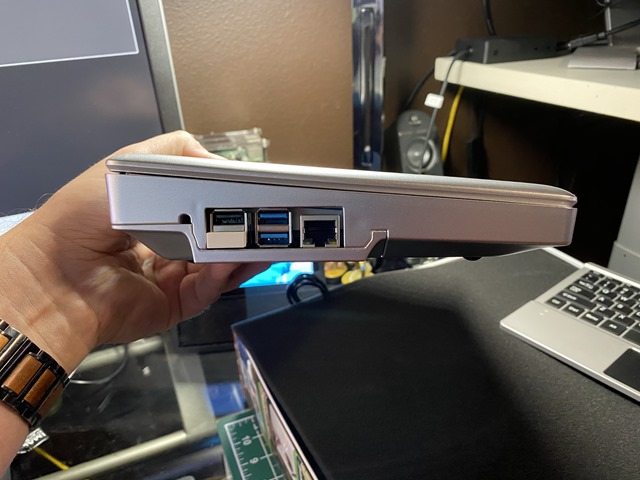 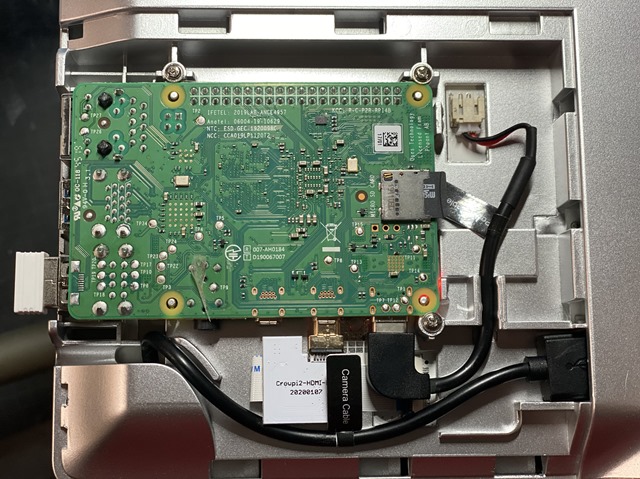 There is even a cool little retractable tray in the back of the CrowPi2 that you can use for a battery (with a micro-USB cable you can run the entire device) or for holding wires, LEDs, and resisters for projects. 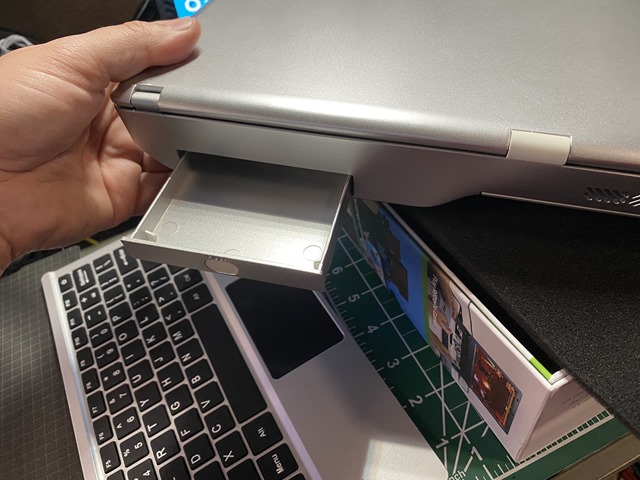 The real magic is the sample projects - they are quite cool. They've added AI and Machine Learning lessons with Thonny PI, loaded MineCraft Pi. There are games, sensor tests, and they basically exercise the whole main sensor board with Python.

NOTE: I've also installed .NET Core on Raspberry Pi and it works great since it's an ARM Machine. You can even run Docker!

The basic kit is very reasonably priced compared to the much more barebones kits you see on Amazon. While I wouldn't call it a "premium" kit due to the plastic case, it's definitely the best Raspberry Pi kit I've ever used. 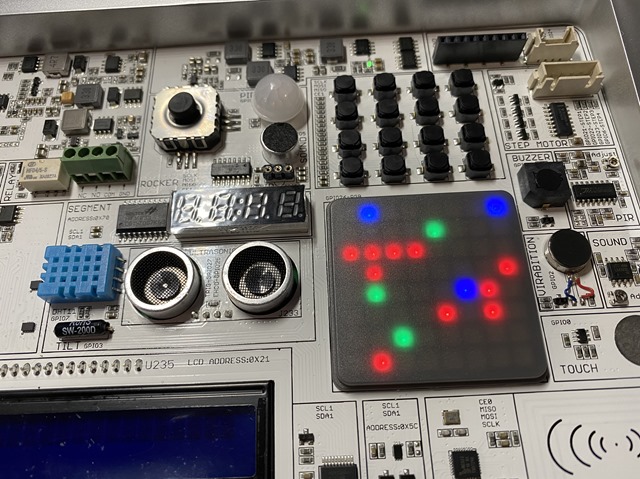 You can go support the new CrowPi2 over on their KickStarter ending this week, it's pretty darn cool.

Sponsor: Bug in prod? Get to the bottom of it, fast, with live production log search in Seq 2020.1.