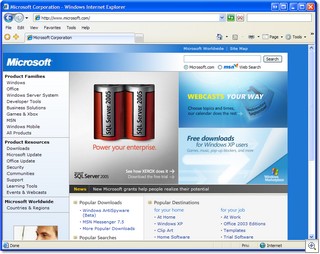 Internet Explorer 7.0 Beta 2 is out, and I'm not going to install it - I just paved my machine, and I don't want to throw it to the beta-wolves.

Fortunately this version supports the same hack as the previous. Download the Beta EXE here and unzip it. It's an EXE, but it's a ZIP, so create a folder and unzip the contents into the folder. There will be an UPDATE folder that you don't need that can be deleted.

Create a file called iexplore.exe.local and put it in the same folder. It doesn't have to have anything it in. You can do this from the command line like this:

...then press Ctrl-Z. Now you can run IE 7 Beta 2 without having installed it (see image above).

OK, REALLY, FINAL UPDATE: This messed up my system as well such that clicking links in IE would open them in FireFox. While a neat trick, suboptimal at best. Thanks to Jon Galloway, I fixed it with this .reg file that deletes some tumor in the Registry:

UPDATE: From the IEBlog "As Chris Wilson pointed out, "'IE' is actually a collection of system components - networking, browser hosting, core HTML rendering, printing, etc. When we install a new version of IE, we're installing it for all applications that use these system components - including the tiny iexplore.exe itself." Because of this, we do not support the various hacks that allow side by side running of IE6 and the IE7 Beta 2 Preview. Running with these could cause issues with the stability of a system.

So, seriously, now I'm sorry I even mentioned it. ;) Your Mileage May Vary. I recommend hanging back while we learn why this is all so hard.

Comment on this post [19]
Share on Twitter or Facebook or use the Permalink
February 02, 2006 1:43
None of my zip programs (which admittedly have all gone several years without an update) recognize this file as something they can unzip. What did you use for that?
Really useful find otherwise. Crossing my fingers that it'll run on Win2k as well when "installed" this way.

Scott Hanselman
February 02, 2006 2:29
I just right clicked on it in Explorer and WinRar offered the option to extract it. :)

Rich Mercer
February 02, 2006 2:56
(for Me anyway) this breaks IE 6 big style, I followed the instructions to the letter

Scrambled
February 02, 2006 3:00
DJ, can you give me an idea of HOW it scrambled? You didn't unzip into the Windows Folder or anything, right? I'm still running IE6...

Scott Hanselman
February 02, 2006 3:04
It does appear to have affected the regular install of IE. Any shortcuts go really wild, although starting it from the start menu works fine. Also, interestingly, IE7's feed features seem to be disabled running in this mode.

I am posting this comment right now using IE7Beta2preview "installed" this way. I hope you don't get /.ed!

I used 7-zip to extract the files and didn't have any problems with it seeing the exe file as a compressed file container. I couldn't get your command to create the file to work, but I just opened notepad and saved a blank page with the filename you offered and that worked fine.

This is awesome! I am going to try and see if it works off a USB flash-drive on other XP2 systems as well as W2K (not holding my breath on that one).

I sincerly wish that MS would offer this "portable" functionality/installability for future verisons of IE7. It might give them a little bit more credibility and help them compete with the other portable browsers out there like John Haller's Portable Firefox. I think there is a portable Opera version out there as well.

Man, I can't thank you enough for this trick. Saved me from worrying about installing it on my precious home system, but I was dying to try anyway!

Dwight Silverman over at the Houston Chronicle's TechBlog has a posting about IE7 Beta we got started. I added a comment linking to your site to spread the joy!

Thanks again. I knew your content was worth adding to my RSS feed for a reason! You rock!

It did work fine, but then seems to lock up the favorites in IE6, even after a full reboot of the system.

I still think you rock though!

Claus
February 02, 2006 4:21
Well, I tried this before the warnings were posted, and now my IE 6 is screwed up. If anyone comes up with a way to fix IE after following the instructions, please post them. Thanks.

Brian Russell
February 02, 2006 4:26
Brian,
Use IEFix - http://windowsxp.mvps.org/IEFIX.htm
Yesterday I tried IE7 Beta2 without installing it, and it messed up my IE6... Luckily I got IEFix to save the day.

I did a full "normal" install of IE7Beta. Rebooted.

(Link has some registry hacks as well if a clean uninstall doesn't work well.)

Went to add/remove programs in control panel and ticked the little "show updates" box at the top. Found IE7Beta listed down at the bottom. Uninstalled it. Reboot.

System up and IE6 back to normal and operating normally. Fortunately, I didn't have to do any hacks to the registry.

I don't buy the "it can't be done" thing that the IE team is saying. IE Standalone has worked for years on versions IE3 - 6. They recently broke it, and don't want to fix it. I guess that's what happens when you put a product on life support for 5 years, then defrost it - the new team doesn't seem to know about some of these older features.

Jon Galloway
February 02, 2006 6:40
Crap. This was working but now it's screwed up my IE6. If I have two browser windows open and I do a search in my google toolbar, the results are launched in the other window. Oh well, serves me right.

Bil Simser
February 02, 2006 7:40
Okay, so rename to .cab did the trick for me.
Could people give more specifics on all the ways this messes up IE6? I don't use it for anything other than testing anyway, so favorites and such are completely irrelevant to me, and if that's the only thing that's affected, I can definitely live with it. What I want to know is, does IE6 rendering remain unaffected?

(Weird, having problems commenting here. Did a hard refresh, but it's not showing up, so trying again; hoping it won't double-post.)

Sander
February 02, 2006 8:52
Well, my attempt at using this is officially pooched my system, hard time.

Running IE6 now does odd things. Google toolbar won't function correctly. Clicking on links will *sometimes* launch them, other times it will launch a new browser then lock both of them down. It also creates extra iexplore.exe instances that I have to kill via the task manager. And forms, well forget about them.

In short, my system is screwed.

I'm now downloading a fresh copy of IE7 (using the IE7 that is working because I can't get it with IE6 anymore) and going to install it and then hopefully roll back to IE6 again.

Short of that, it's time to pave the dev box (and this sucker has about 200 programs installed).

Jon Galloway
February 03, 2006 5:56
Thanks to Jon's post things are back to (somewhat) normal (with normal being relative of course). Thanks guys!