I'm still using the Free MiniMac and digging it more each day. I got a copy of Running Mac OS X Tiger from O'Reilly. It's really an excellent book. It's got a great, casual tone that realizes that there is a kind of user that isn't a newbie, but isn't a *nix or Mac freak. Just a "prosumer" who wants to get the most out of the new Mac. It's also, as an aside, written by a Portlander, which explains the general tone of the book. This second edition book feels like the work of a person from the NW (which is a very good thing, IMHO). Apparently the second autho built on the work of the first who did the first edition, but you really wouldn't notice as the tone is very even throughout.

I still haven't been able to get my Canon S300 printer (shared via Windows) to work with my Mac. I'm not sure that the Canon drivers I install work for remote printers running under Windows. Even though I installed the new drivers, the S300 doesn't appear in the Printer Browser; only the S400 and S450, and when I print a whole page it only shows up at 1/4 size. Hm. Underneath it's still voodoo.

Anyway, the book walks a nice fine line between the Unix underlayman and the Mac UI. The opening section on the history of the OS refrains from Microsoft bashing and is a very interesting read. I'd forgotten about the whole Rhapsody fiasco and the NeXtSTEP stuff. 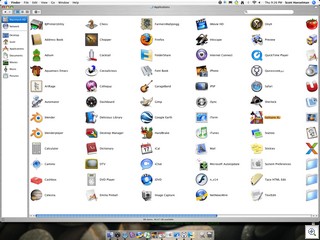 Here's a current screenshot of my Mac's Application's folder.Thanks to Scott and Grant from the comments of my Mac post for getting me started...maybe it's time for a Mac Ultimate Tools List? Maybe in a few more years when I know what I'm doing.

If you've got a Mac, you've got some Unix experience but you don't consider yourself a Mac-person, this book is a good way to head in that direction.

Comment on this post [7]
Share on Twitter or Facebook or use the Permalink
January 13, 2006 7:00
I love Mac. I have one at home and planning to buy Mac mini like the one you have. My blog isn't as popular as yours, so I don't think I could get a free Mac mini.

It would be great if you can cover some interesting Mac stuff in Hansel minutes.

vbNullString
January 13, 2006 10:43
I don't think you can get the printer to work like that, you need a CUPS driver for the printer (IMHO). I have a similiar problem, canon don't do CUPS. I might investigate using a NAS to share it via appletalk, but its a lot of money to waste if it still doesn't work.

bg
January 13, 2006 14:54
I'm glad some of those suggestions worked out for you. I've been looking for a Windows program that will rip a DVD to some kind of portable resolution, iPod video is fine, that's as easy to use as Handbrake. I haven't found one yet. The FairUse ripper is pretty close, but it still stops and asks me all these questions in the middle of ripping and makes me babysit it's "Next" button.

If you are at all interested in Rails development, I'd recommend getting Locomotive.

Have you checked out VooDoo pad? Gus just updated it with LUA scripting and plugin support.

FWIW, I haven't been able to connect to our shared Cannon printer from my iBook. It's attached to an old Win2K box. I can plug the printer into my iBook directly and print fine.

Have you tried doing Cocoa development? C'mon, you know you want to. XCode is RIGHT THERE on your install CD. First one, and all the rest, are free man. ;)

Scott
January 13, 2006 17:17
BTW, I could certainly print stuff out to Canon printer hooked to my Windows XP machine. I wrote the steps in Japanese, but you should be able to follow the screen capture. But then, I'm sure you did what I did already... Just in case...

vbNullString
January 13, 2006 17:47
Thanks Hiriumi, but you skip a step in your screenshots, no? The second to last says "Printer Model - Generic" in the screenshot, but the last one says the kind is S800. When did you select that?

My problem is that even though I installed the S300 drivers from Canon, they don't show up in the list of Printers...

vbNullString
January 17, 2006 14:59
I've had all kinds of trouble with remote printing of all kinds on Mac OS X. It seems to require slightly different voodoo each time (much like Linux).

I do remember once with Linux I was printing fine but getting the small page size. The problem was that the DPI wasn't set to the "native" DPI of my printer. It was 150 and my laser printer was a 600dpi printer. So something in the driver chain probably wasn't scaling the image up right, so I got a complete print out that took up -exactly- 1/4 of the page. You might try bumping your DPI up, wherever that is done in the mac. You'll probably need to visit the ugly CUPS interface at http://127.0.0.1:631/ to do that.

In getting my mac to print to an hp officejet on a windows system, I had to get the hplinux drivers for cups, compiled for mac os (http://www.linuxprinting.org/macosx/). Of course, sounds like with the canon you're further ahead than me, 'cause I couldn't get anything but page after page of garbage until I got those drivers. I'm pretty sure if you set your DPI to whatever the printer needs (I'd guess 600, since it's probably at 150 now if its 1/4 the size) it should help.

FWIW, the HP drivers didn't work at all. They installed 60MB of crap, and only support local printing, although the manual doesn't actually say that anywhere.

Good luck! Setting up a remote printer in Mac OS X is disturbing similar to the linux experience.