Following up on my post last week on moving from App Service on Windows to App Service on Linux, I wanted to make sure I had a clean CI/CD (Continuous Integration/Continuous Deployment) pipeline for all my sites. I'm using Azure DevOps because it's basically free. You get 1800 build minutes a month FREE and I'm not even close to using it with three occasionally-updated sites building on it.

Last Post: I updated one of my websites from ASP.NET Core 2.2 to the latest LTS (Long Term Support) version of ASP.NET Core 3.1 this week. I want to do the same with my podcast site AND move it to Linux at the same time. Azure App Service for Linux has some very good pricing and allowed me to move over to a Premium v2 plan from Standard which gives me double the memory at 35% off.

Setting up on Azure DevOps is easy and just like signing up for Azure you'll use your Microsoft ID. Mine is my gmail/gsuite, in fact. You can also login with GitHub creds. It's also nice if your project makes NuGet packages as there's an integrated NuGet Server that others can consume libraries from downstream before (if) you publish them publicly.

I set up one of my sites with Azure DevOps a while back in about an hour using their visual drag and drop Pipeline system which looked like this:

There's some controversy as some folks REALLY like the "classic" pipeline while others like the YAML (Yet Another Markup Language, IMHO) style. YAML doesn't have all the features of the original pipeline yet, but it's close. It's primary advantage is that the pipeline definition exists as a single .YAML file and can be checked-in with your source code. That way someone (you, whomever) could import your GitHub or DevOps Git repository and it includes everything it needs to build and optionally deploy the app.

The Azure DevOps team is one of the most organized and transparent teams with a published roadmap that's super detailed and they announce their sprint numbers in the app itself as it's updated which is pretty cool.

When YAML includes a nice visual interface on top of it, it'll be time for everyone to jump but regardless I wanted to make my sites more self-contained. I may try using GitHub Actions at some point and comparing them as well.

If you have one, you can go to an existing pipeline in DevOps and click View YAML and get some YAML that will get you most of the way there but often includes some missing context or variables. The resulting YAML in my opinion isn't going to be as clean as what you can do from scratch, but it's worth looking at.

In decided to disable/pause my original pipeline and make a new one in parallel. Then I opened them side by side and recreated it. This let me learn more and the result ended up cleaner than I'd expected. 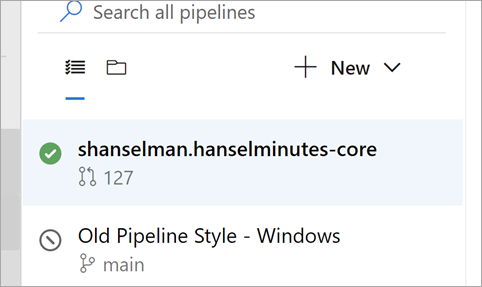 The YAML editor has a half-assed (sorry) visual designer on the right that basically has Tasks that will write a little chunk of YAML for you, but:

But it does provide a catalog of options and it does jumpstart things. Here's my YAML to build and publish a zip file (artifact) of my podcast site. Note that my podcast site is three projects, the site, a utility library, and some tests. I found these docs useful for building ASP.NET Core apps.

Next I move to the release pipeline. Now, you can also do the actual Azure Publish to a Web App/App Service from a YAML Build Pipeline. I suppose that's fine if your site/project is simple. I wanted to have dev/test/staging so I have a separate Release Pipeline.

The Release Pipelines system in Azure DevOps can pull an "Artifact" from anywhere - GitHub, DevOps itself natch, Jenkins, Docker Hub, whatever. I set mine up with a Continuous Deployment Trigger that makes a new release every time a build is available. I could also do Releases manually, with specific tags, scheduled, or gated if I'd liked. 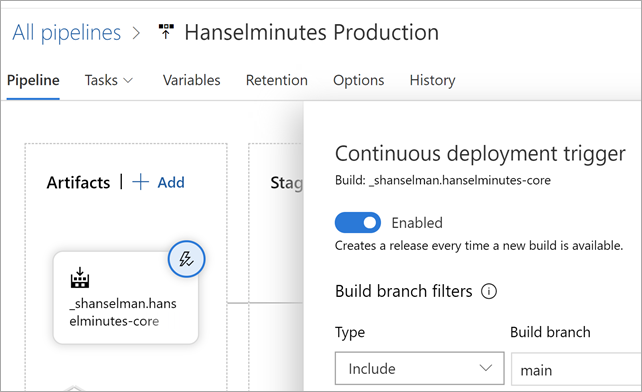 Mine is super easy since it's just a website. It's got a single task in the Release Pipeline that does an Azure App Service Deploy. I can also deploy to a slot like Staging, then check it out, and then swap to Production later.

There's nice integration between Azure DevOps and the Azure Portal so I can see within Azure in the Deployment Center of my App Service that my deployments are working:

I've found this all to be a good use of my staycation and even though I'm just a one-person company I've been able to get a very nice automated build system set up at very low cost (GitHub free account for a private repo, 1800 free Azure DevOps minutes, and an App Service for Linux plan) A basic starts at $13 with 1.75Gb of RAM but I'm planning on moving all my sites over to a single big P1v2 with 3.5G of RAM and an SSD for around $80 a month. That should get all of my ~20 sites under one roof for a price/perf I can handle.

Once it's placed you're on your own
You can't edit it or modify it visually. It's text now.

Alexandre Nedelec
December 18, 2019 13:02
The first two steps in your build are duplicates:

Szasz Attila
December 19, 2019 2:15
A huge point of frustration for me at the moment is that the deployment widget against a Linux app service sets the runtime stack, and right now the newest version of Core they support is 3.0. I'm not sure why they force that on you at all. I've set the version for the app service in the portal, and I don't really want the deployment to change it. And even then, it's not like the release of v3.1 was a surprise that no one could see coming. If there's one thing I'll say about the framework teams, it's that they're pretty good about sharing a roadmap and sticking to it.

You are right it is a very nice experience using CI/CD when targeting an Azure App Service web site. However the CD part of this is less than straigtforward when dealing with a web site hosted elsewhere, namely PLESK. I have struggled too long to deploy my web from the CD pipeline using all manner of File Extract / Copy Files / FTP Upload tasks to no avail.

Why can I just not use my Visual Studio Publish Profile as the basis for the CD deployment which just works seemelessly keeping a nice simple directory structure? Am I missing something?

Merry Xmas and thanks for your teachings during the year.
Mark

Romannep
December 25, 2019 0:07
I agree that the UI experience is a bit half-assed. As much as we, as developers, advocate for agile development, we're very impatient when it comes to being on the other end of an agile process. ¯\_(ツ)_/¯

Not sure if I understand correctly, but when you say you did a separate release pipeline because you want to have different stages, I'm pretty sure it is possible to do it with YAML.

It could even be a separate YAML file and a second pipeline with all the stages triggered by the build artifact.

Feel free to add the many ones missed in the list.

They are several persons entire career worth of knowledge

And of course, expecting the full-stack developer to have expert knowledge of the new and upcoming web frameworks also.

Does this process replace the one documented by Microsoft here:
https://docs.microsoft.com/en-us/azure/devops/pipelines/ecosystems/dotnet-core?view=azure-devops&WT.mc_id=-blog-scottha

If so that removes the need for VSTS, correct?