South Africa 2008 - Being Away from Home for a Long Time 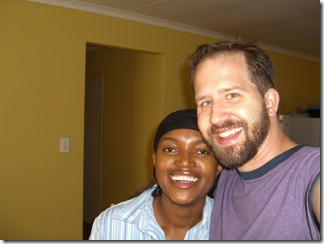 Here in Joburg it is the holiday season and it is body temperature outside. By that I mean it's 37C/98.6F. That's insane. And it's wet sticky can't sleep no AC and there's bugs hot, not just regular hot. I recommend everyone experience it.

Back home in Oregon, there is two FEET of snow in my front year and it's a balmy -5C/23F, just like I like it. Shorts weather, you know. ;) Apparently the PDX airport is utter chaos, totally frozen. The flight we are taking from Amsterdam has been cancelled or rerouted for days. Should be worked out by the time we get back and we'll literally miss all the excitement as if it didn't happen.

However, we've been away so long (almost a month) that I am starting to forget stuff about home. Sounds silly, but it's true. I hate the heat, but I am getting used to it. I'm drinking water from the tap. I'm driving around Joburg at 1am on the left side of the road and not finding it odd. I bought 20R worth of coat hangers while waiting at a red robot and didn't giggle when folks rolled their R's while saying red robot. I'm asking for brown bread rather than wheat, and amanzi still, rather than bottled water. We're eating sadza or pap and not complaining.

It's nice to visit somewhere for a week or five days, but let me tell you as someone who's done it many times, somewhere around a month your brain starts to say "Hm, maybe this guy isn't going home. Maybe he is home."

You start to figure out where to buy bread and milk, you get connected, you fill up your tank, you learn the footpath shortcuts, you walk home from the mall in the dark. You're not a native by any stretch, but you've found direction and momentum.

You start to figure, "ok, I guess folks CAN live like this."

Now, to be clear, this is the same when going from Oregon to South Africa as it is going from Oregon to, say, California, or from Johannesburg to Cape Town. Moving is moving and everyone has a tushy, as I tell my son. Folks aren't THAT different. This experience is the very essence of travel.

It's an important reminder to be and my family that, (from an American point of view) that there are people in the world that will never come to the US, don't want to come to the US, don't live like folks in the US and aren't interested in the US. Everyone has a different way of doing things and if it works for them, good for them. Seems obvious, but it is surprisingly un-obvious for folks. (This of course, also works if you replace American/US with your country. ;) ) Get your kids out of town, in a tent, at a boma, on a camel and eating tripe. Have them walk 3km barefoot at noon without complaint. Put them in a situation where they are the only white/black/brown/yellow person in a room of folks that aren't. Now, do that for more than a month if you can. South Africa is a nice place to start and I recommend you travel here and check it out. We have a blast every time we go. I wouldn't be out of passport pages if it wasn't true. I am just bummed with didn't make it to Lesotho this time.

Anyway, just as I get start getting used to things, it's time to go. Just another week or so and we'll be packing up.

I want to say Thanks Again to Mario and Tina for loaning me this modem and showing me how to buy minutes/megabytes.

https://www.google.com/accounts/o8/id?id=AItOawmH_Cnr5vdauWLTb-hj4cEHvCnlhwo5CoE
December 23, 2008 9:30
I'm native and I'd never walk home from the mall in the dark :-) Fascinating reading Scott, you've seen parts of South Africa that I never had and definitely had different experiences, thanks for sharing them. And that's R20, not 20R :-)

PRMan
December 23, 2008 11:00
PRMan - Heh. If one wants to go visit the Holiday Inn in any country in the world and have a very aseptic trip, eat breakfast at the buffet, and take cabs everywhere, one can totally do that. But if you want to find out (IMHO) what the world is really about, good or bad, you have to drink the water, speak the language, and sometimes get rocks thrown at you.

BTW, a bad trip would involve hospitalization over 1 day or losing a finger or limb. Otherwise, it's a good trip.

Ewan - I may have gotten lucky, or perhaps my Obama T-shirt protected me. ;)

Scott Hanselman
December 23, 2008 13:03
Loving these travelogues Scott. We did a fair bit of travelling before our kids were born, this is inspiring me to go again and let them experience it all from an early age. Happy holiday :)

Gareth
December 24, 2008 9:32
It's also important to note that there are people who live *in* the U.S. who will never leave their home state and visit *any other* part of the U.S.

Scott
December 27, 2008 1:02
Before my wife came along, the only foreign country I had ever been to was Canada and Alaska. And the furthest I had moved was to the next county. Now she takes me all over the world and we have a blast with our son tagging along. On our honeymoon, we went to Europe and that was the day she had completed circumventing the earth. She is the only one I know that went completely around the world.