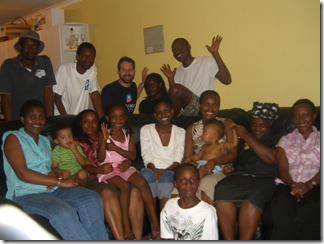 Every non-White or Mixed family has the "White Uncle." Someone's daughter or cousin or sister married Scott or Jeff or Gary and he's the White Guy at family reunions. That's me. My wife's family has been very open about it and haven't given me any trouble other than friendly teasing about excessive whiteness. Surprisingly though, I'm the only one who can dance in this family, but that's another post altogether.

(This works the opposite way also, where every White family has the Black Guy, or Gay Cousin, or Little Person, or whatever. This is about being "The Other One," in the family...color doesn't really matter. I also happen to be the "diabetic one" as well as the "computer guy" so you get the idea.)

Being the White Guy usually gives you an extra hit point or two and a +1 bonus against faux pas. Everyone will cut you some slack if you say something clueless.

"How does he not eat goat liver for breakfast?"

This also works the other way, when you, as the Other One, have some mysterious knowledge or powers. If you're the Black Girl in a White Family, people will freak out when you get braids and suddenly you've gained a foot of length overnight. Or, they'll give you a hard time for not going swimming after coming from the salon. Ashy knees are a mystery to White People as is Pink hair oil, Yakky, Ambi, and Braid Sheen.

I've just received a nasty sunburn (my fault for not putting sunscreen on) after walking 3 klicks to the mall yesterday. This is the talk of the house as it's not something you see everyday around this family.

"It's going to peel off? Gross! You guys are fragile!"

"Thanks for declaring that amaKiwa (White People) are fragile because we burn slightly under the oppressive heat of your thousand African suns!"

This is a typical back and forth with the family here. I heard something in the news last week the scientists have finally proven that, from a DNA perspective, all of us are something like 99.9% identical, regardless of race. That may be true, but after 8 years of marriage and many trips home, we learn new random crazy stuff about each other every time.

Comment on this post [19]
Share on Twitter or Facebook or use the Permalink
December 10, 2008 16:32
This is a universal truth in multi racial families. My wife being fillipino and me being mostly white.... holidays where my family go to her families house, are amaizing....

Mike Wolf
December 10, 2008 16:54
Ja - you want to watch out for the sun down here, especially us umlungu's. Our ozone got poked by the first world liberally spraying themselves with Brut

http://mattevans.myopenid.com/
December 10, 2008 22:59
Hilarious! Being black, I could relate fairly well to what you're speaking of. My wife is white and we have similar back and forth joke sessions. Cool beans.

bbqchickenrobot
December 11, 2008 1:07
Yep, all the kids on the institute grounds used to come out to watch me burn my rubbish every Sunday (as an alternative to tieing it up in plastic bags and throwing it over the fence into the road). When one kid asked why I was doing this strange activity, an older girl told him that it was "kizungu." And that seemed to explain everything to all of them, quite satisfactorily. Sort of an Obelix 'These Romans are crazy.' kind of assumption... Cross-culturalism is a really, really interesting field.

Everybody is going to be beige eventually.

Though in case of differences between people -- they are mostly defined by cultural differences, not by genetic.

http://dennisgorelik.livejournal.com/
December 11, 2008 13:30
It's interesting how cultures can contrast. I'm an African married to a white American in one of the least diverse places in America, South Dakota. Although the cultural differences are many most tend to stem from my growing up urban while my in-laws have only a rural experience. It seems like these days living in a city can give you the kind of "travel without moving" experience to build up a sense of other people (if not a few stereotypes).

Being the only black among whites can sometimes make me the expert on race relations in the US (never mind that I was born in Kampala, and spent the vast majority of childhood in Nairobi).

That whole not swimming thing is funny. It took me a long time to find the equivalent ("ashy") for what I knew in Nairobi as "parara."

But you:
When you're born you're pink,
When you grow up you're white,
When you're sick, you're green,
When you go in the sun you turn red,
When you're cold you turn blue,
and when you die you turn purple.
And you have the nerve to call me colored!!!

Schmuli
December 11, 2008 13:41
That is an awesome post. I feel for you. My in-laws are lebanese and most of my wife's relatives know english but they claim all the jokes sounds funnier in arabic. I have picked up a few words here and there over the course of our marriage but most of the words I learned are either swear words or "baby words" that we use with our kids.

Anyway, I relate to you on the topic of sunburn. My in-laws rub oil on themselves at the beach while I am applying 100 SPF sun tan lotion. They turn brown and I turn red!

Mike Ceranski
December 11, 2008 14:46
Speaking to the comment "we learn new random crazy stuff about each other every time."... When my daughters asked me why a black person was black and we were white I remembered a quote from (and this proves I was a nerd back in school) Kevin Costner's Robin Hood. In the movie, a little English girl asked Morgan Freedman why God had painted him. Freedman said that it was because Allah loved a wonderful variety. What a great answer, such simplicity!

My daughters are aspiring artists (proven by all the drawings taped to the walls of the house) so I used the same idea but with a twist. I asked them if they would like to color with only one color crayon from now on. They said no and I went on to tell them how if you only had one color crayon you couldn't color beautiful pictures and art would get boring. I said, Gods the same way. By having many people of different colors and cultures, it makes life fun and interesting. Discovery becomes a process we enjoy and we begin to look forward to learning new random crazy stuff about each other every time we meet.

I for one have been around myself all my life. The last thing I want is to do is meet someone just like me.

Zack Johnson
December 11, 2008 20:15
My situation is a bit different, but I still identity with a lot of this. My wife and are white, but we've adopted a boy and a girl from India and two girls from Ethiopia. The girls came home at age (almost) 14, which meant they were not only ethnically Ethiopian, but culturally as well.

Life with them has been fascinating. I must have a thousand stories, but I'll give you two:

2. It was quite a revelation for me when one of my Ethio girls confessed that she used to not like "white people".

Of course, my kids probably identify with you even more than I do. Not only are they dark in a light family, but...we live in Eastern Maine.

p.s. Frustratingly, I can't seem to use my OpenID (http://www.danielgpratt.com). I'm not sure what the problem is. I get redirected to Blogger's credentials page, but once I enter my credentials and get sent back to this site, I get a 404.

What is a matter w/ u? That one made me laugh a lot.

I never realized us Indians have so much in common with folks in South Africa except for the goats liver of-course.

computinglife
December 15, 2008 12:58
I never had goat liver for breakfast, lamb liver and kidneys, for sure, with some "lekker stywe pap". Your black family will know the meaning.

Murtaza
December 17, 2008 16:38
My wife's family is Korean, so I am the token white guy at my wife's family parties (like this year's upcoming Christmas party).

At first there was a bit of an awe with her older relatives, the ones who don't speak English, as they were duly impressed that I was eating Kim che and other banchan and not requesting hamburgers or pizza or whatnot. But I think over the last 4+ years that surprise and interest has faded and I feel like I blend in more, so to speak. Although not in the family picture. You can clearly see the one white guy standing there in row three. :-)

Scott Mitchell
December 17, 2008 20:54
I love the subtle D&D/RPG reference "Being the White Guy usually gives you an extra hit point or two and a +1 bonus against faux pas. Everyone will cut you some slack if you say something clueless" (I played a lot of D&D in my teen years and we still pay about once a year)).
My wife is Hispanic and Italian, so I know how being the "White guy" (in my case the "WASP") is. As far a food goes, other than New England Boiled dinner and BBQ white food pretty much sux, I much prefer food Hispanic and Italian cuisine, perhaps even more than my wife does...

Booji Boy
January 06, 2009 18:37
LOL I thought this was so funny and cute, especially the mention of the hair products. I think it shows your interest in understanding someone elses culture. I love it!