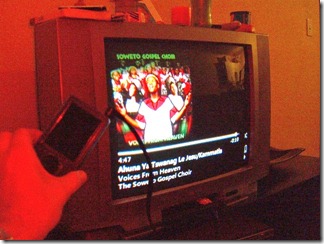 It might be a little hard to see in the picture at right, but that's my Zune hooked up to a TV in South Africa using a standard camcorder cable. That's that kind that looks like a 1/8" headphone connector on one end, and a yellow/red/white RCA cable on the other side.

NOTE: With both the Zune and the iPod, in order to maintain compatibility with headphones, they've reversed the Video and Right Audio Channel, so you need to plug Red into Yellow and Yellow into Red. Trial and error will set you straight. Or, you can pay them $50 for a cable that's already switched. I just used a standard $2 one that my brother in law had in a junk drawer.

Most MP3/MP4 players have this kind of awesomeness built in. I greatly prefer ones that use the headphone jack for video, as I don't like carrying docks or special cables around. Most players, the Zune and iPod included, have settings for NTSC and PAL video output. South Africa uses PAL, so I had to go into Settings and tell the Zune to output PAL rather than NTSC.

One difference between the Zune and iPod is that the Zune switches it's output completely to the TV, including menus. It also resizes the menus to a 4:3 ratio (rather than the Zune's vertical 3:4). The iPod I have switches to video output on a video by video basis.

I brought my first generation 30 gig brown Zune, upgraded to the 3.1 firmware with my Zune Pass loaded. I loaded up 20 or so gigs of my relatives favorite genres as well as 15 hours of news video and audio podcasts for myself. I also like to take the video podcast of the daily news when I travel. It 's nice to share our local news with local friends where we're traveling and compare notes about news bias.

NOTE: I haven't confirmed this, but I've heard that if I don't sync the Zune with my home machine in something like 14 days, all my Zune Pass music will stop being playable. This of course, sucks deeply if true. I suspect it is true as it feels DRMy and DRM is Satan. I'm heartened by the fact that more and more I can download for free via podcast many of my favorite news shows. DRM's on the way out, I think. Just another 10 years or so, hopefully. But, that's a DRM rant.

It took just minutes to hook the Zune up to the TV here. The family was thrilled and with DJ'ed late into the night. I'd encourage you to take your media library with you on your next trip. Pick up a camcorder cable from Radio Shack or your local cheapo electronics shop. Most people I know with iPods/Zunes don't realize that they have this functionality built in.

You can not only listen to music, but of course, bring your family photos and videos. You've got a complete media center in your pocket, and I'm sure uGogo (Grandma) will be thrilled to look at your slides. It's definitely improved our trip.

http://famoushamsandwich.blogspot.com/
December 11, 2008 14:43
No, what I'm saying is that you need to set your media player to output the correct format. The Zune can output EITHER PAL or NTSC. Mine was set to NTSC by default, but it is easily changed.

Scott Hanselman
December 11, 2008 22:55
My zune has this timeout thing with the sync but I thought it was closer to 30 days. It bites me all the time when I pull it out on a plane (the only time I use it) and it tells me all my stuff has expired.