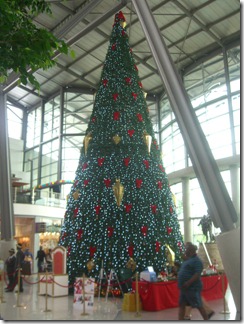 Soweto means South Western Township. I drove the family to the Maponya Mall in Soweto today for an outing. From the city's website:

Soweto is the most populous black urban residential area in the country, with Census 2001 putting its population at 896 995. Thanks to its proximity to Johannesburg, the economic hub of the country, it is also the most metropolitan township in the country - setting trends in politics, fashion, music, dance and language

Soweto celebrated its hundredth birthday in October 2004. A chronology of key events, the June 1976 uprising, and the centenary celebrations.

The city has made the redevelopment of Soweto a major priority, including electrification, tarring of roads, and the building of public facilities and housing.

You may think of ghettos and shacks when you hear the word Soweto, and if you look for them you'll find them, but I've really noticed a difference in Soweto in recent years. I haven't got a tale of rich people visiting poor people as a form of tourism. The mall was as nice a mall as I've ever been to, including malls in Asia (which are REALLY nice). We didn't go to the cultural center (yet) or Mandela's house. We went to the mall. And it was lovely.

There's a rising black middle class, and they were all at the mall today. The whole place was decked out for the holidays, which I find slightly funny because it's quite hot and I just think snow when it's Christmas. Anyway, there was a huge tree in the center part of the mall.

One of the things that strikes me about the mall in Soweto is how "put together" everyone is. Great outfits, cute hair, folks are fit and sharp. I felt underdressed, completely. If you go out, you'd better look nice. 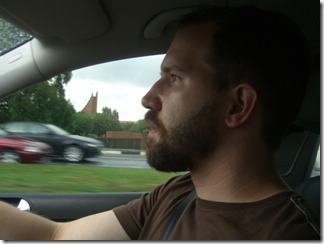 I did also feel White, as I was alone in that sense, but didn't feel uncomfortable. It was actually very interesting (as it always is) as it's a reminder as to how my wife feels. As a white guy, it was like dropping into the movie "White Man's Burden," or a photo negative. I was effectively an albino. One actually forgets one's color in these situations, and after a few weeks if I pass a mirror it takes a second to remember my pastiness. Fortunately I am sporting a pretty darn good beard so I'm brown from the neck up. ;)

The Soweto mall has everything any other mall in the world, so it was great for Christmas shopping. My wife's younger brothers are moving out of the house so we are in the market for a fridge for their apartment.

Not a really exciting post, this, but rather a mundane story about holiday commerce. We drove to Soweto, we shopped, we returned. I drove on the left. This was my day, until tomorrow. If you visit Joburg, definitely check out Maponya Mall in Soweto.

Comment on this post [18]
Share on Twitter or Facebook or use the Permalink
December 16, 2008 1:58
I was just in Malaysia for 3 weeks and was impressed by their 7 stories malls, and they call those "the small ones", downtown they had a 11 floor mall, every store that you can and cannot think of is there, all the most exclusive from Paris to New York... and then some more

I find the South Africa 2008 series pretty interesting (and it gives me a few minutes of distraction from the tech world). Please keep posting.

http://alekdavis.blogspot.com/
December 16, 2008 3:24
I also agree that this series of posts is very interesting. The greatest thing about traveling is being put into a situations with which you are not familiar. This can and often does lead to an expanding of horizons and a view that people are people no matter their skin color and culture. In my mind, understanding=peace.

nickhodge
December 16, 2008 9:31
Nandos, which started in SA but now has branches in the UK and Australia ( thank goodness ) is wonderful - best fast food without a doubt. Careful which sauce you pick though as extra hot is as it says....
Nandos adverts are a good laugh - the best ones were during the first SA elections with really clever SA politics "in jokes".

That along with the peri peri chips with more extra hot sauce for dipping - Fast food heaven.

Eric
December 16, 2008 19:08
Scott, If you have the time (and if you don't have the album already) have a look for the "Lullabies From Mama Africa CD". Sounds like you enjoy your African music and this one is a must have when you have a baby around.

Andrew
December 16, 2008 22:24
Love this series of posts, Scott. Nice to learn about these other cultures from a white American's perspective.

And that is a damn good looking beard, if I do say so myself. Mine is almost there.

Tom
December 17, 2008 1:06
Agreed with everybody else: please keep posting about your trip, the cultural differences, experiences, etc. It's as close to Africa as some of us are going to get and having a geek's perspective is much more interesting than simply reading some random travel review.

You can still tie in with your usual tech stuff, if you're in any way worried. For example, have you shown Babysmash! to any of the locals? I'd like to find out about impressions and especially suggestions for changes or new features.

Oli
December 17, 2008 5:30
We have Nandos in Canada (Vancouver, BC) too - in fact its just up the street from where we live, so its a frequent fast-food stop. You can also buy their sauces in the grocery stores.

cnurse
December 17, 2008 9:56
If you liked Nando's then you must try Chicken Licken. Your family might have introduced you to it, if not then request that they do. The only chicken place I know of that gives you a raw green chilli with your chicken.

Let me just start by saying what a great talk it was you gave in SA.

Its relatively a new mall, opened this year and the developers did a great job of analysing what people within Soweto wanted so they could stop them going all the way back to Joburg North (Clear Water, Cresta, Sandton etc)

As a result its like the super mall in the neighbourhood.

As someone who stays in SA, I can tell you that no mall is like Maponya. I have driven many times from JHB North - there is just something viby and connecting about the place, and honestly the girls there are out of this world :)

Hope you enjoyed the rest of Soweto, I often say thats the real SA that tourists never get to see.

A bit disapointed that you had Nandos, I would have wanted you to try some of the local dishes. They have a place called Nambita in Soweto and they sell some good local dishes. Give the pap and magudu (cattle intestines) a try if you go there...

https://www.google.com/accounts/o8/id?id=AItOawkqTdR7kes3MCp_5sSfuuSEh23W5kYmcds
December 17, 2008 11:42
Yeah! we are printing currency here like crazy over here to help all the sinking ships. Fed have reduced the interest rate to nothing and dollar is falling. When you convert back to dollar, you might be pleasantly surprised.

By the way, you look upset in that picture.

Matt
December 18, 2008 12:38
Know exactly what you mean when discussing the 'whit man' in Africa. walking down the high street in Harare when i last visited i was always very aware of 'the eyes'. not hostile but very curious.

I swear one guy actually walked into a lamp post he was so engrossed in the strange couple walking hand in hand..as for drivign whith her in the front seat? sems folks theought i was getting overly familiar with the maid..made me laugh..not her tho..strange?

Being in the minoriy puts a whole different view on 'race relations' when you get back home, a real eye opener.

Love Africa, hope to go back soon, so enjoy your trip and keep posting
J

john morse
December 19, 2008 11:48
Ahh, if you went onto the other side of the highway you would have visited Lenasia - where I grew up. Created during apartheid period for the "Indians". Would have been an interesting experience of its own.
Oh, and Flake really is great. I miss the South African chocolates when I visit the US.

abe
December 20, 2008 0:05
I think that one of the best things an American experiences when traveling abroad is a first hand understanding of how diverse the USA is compared to most other places in the world. It's easy to take that diversity for granted and just assume that in every corner of the world there are black, white, Hispanic, and Asian people all living in the same town, working together and playing together.

I went to Korea for a couple of weeks last year. Seoul, the largest and most metropolitan city in Korea, must have a Korean population of 95%+, but the people there didn't seem to give me much more than a cursory look. Now, out in the countryside, where I was probably the only non-US solider white guy within 100 km, I got a lot of attention. At one point a little girl was skipping along, singing to herself, happy as a clam. She sees me and her eyes widen in fear and she runs back to her father. (My in-laws tell a similar story of my wife, when she first came to the US at 3 and was enrolled in pre-school she thought the white kids in the room were ghosts and was petrified until her mom explained that they were just kids like her, and off she went to play with them.)

I didn't much mind the extra attention, I'd just smile back at those who took notice of my different appearance, but it did make me appreciate the diversity here so much more.