Squeezing the most out of IIS7 Media Bit Rate Throttling 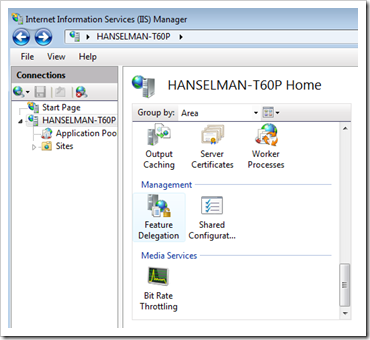 ScottGu blogged about the IIS 7.0 Bit Rate Throttling Module being released. Since IIS 7.0 is totally modular (finally!) I think you'll see lots of increasingly useful modules coming out from the team. I know a couple of cool people over there so I get a little insight into what's coming soon.

Since I'm into podcasting some, I started bugging a PM in the IIS team about the Bit Rate stuff in order to dig deeper into what's going on and how I can exploit it. The next step will be to convince Carl, my producer, that we need to get on this stuff.

His Gu-ness has a better description of Bit Rate Throttling that I could write, so here's the meat of it:

In a progressive download scenario a client (like Flash or Silverlight) downloads a video directly off of a web-server, and begins playing it once enough video is downloaded for it to play smoothly.

The benefit of using a progressive download approach is that it is super easy to setup on a web-server. Just copy/ftp a video up to a web-server, obtain a URL to it, and you can wire it up to a video client player. It doesn't require any custom web-server configuration, nor require a streaming server to be installed, in order to enable.

The downside of using a progressive video download approach, though, is that web-servers are by default designed to download files as fast as possible.  So when a user clicks to watch a video on your site, your web-server will attempt to transmit it to the client as fast as possible.  This is fine if the user decides to watch the entire video.  But if the user stops watching the content half way through the video (or navigates to a different page), you will have downloaded a bunch of video content that will never be watched.

If the remaining un-watched video content is several megabytes (or even tens of megabytes) in size, you will end up over time spending a lot of money on bandwidth that is not benefiting your business/site at all....

That's the problem this module tries to solve. If you think it's not a problem, talk to me or Carl. It costs a metric buttload to pay for bandwidth of my podcast and it's a harder problem to solve than you think. (Yes, every show has bittorrent as an option, but few Feed Readers use it). A surprising number of folks visit the site and just click on a show and start listening in whatever Media Player they dig.

If someone starts streaming the first 20 seconds of a 45 minute show, decides they don't like it and stops, we may have to pay for the whole 45 minutes as it might already have been downloaded! This is also good for screencasts.

The media throttling stuff looks at the file you're downloading, "bursts" the first chunk to make the "buffering" part of your listening experience as fast as possible, then it throttles the bandwidth from that point on, making sure it doesn't have to buffer again, but still saving bandwidth.

"It's also worth noting that the throttler uses a high-performance asyncronous loop to push the data out, without tying up server threads for what can be a very long operation. For responses coming from files (like most large video files), it also does not need to read the content's of the file being sent into memory, instead just instructing http.sys to send portions of the file out to the client at a time.  Because of this, it won't significantly affect your memory usage. While this mechanism is not as efficient as http.sys's own site-wide bandwidth throttling (which cannot be used to do what we are trying to accomplish here), it is pretty much as lean as it can be."

So, I'm going to give this a try on my local machine. I'll start with a recent WMA of the show and put it in a folder under IIS. 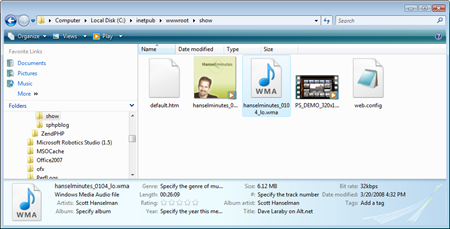 Notice that this show is a WMA encoded at 32kps (for low-fi/low-bandwidth listeners) and is in http://mymachine/show. I turned on Bit Rate Throttling from the IIS Management Console.

You can set the throttle rate as a percentage of the encoded rate. I'm leaving it as 100%, so that's 100% of 32kbps after the initial burst of 20 seconds.

ASIDE: One of the things that is way better in IIS7 than 6 is dealing with permissions and "blocking issues." You know, when you setup a folder, configure the VDir and you get something like "permission denied" then you spend 20 minutes trying to figure out why you can't serve a freaking text file out of a folder? IIS7 has a "Test Settings" dialog like this that just saved me those 20 minutes. 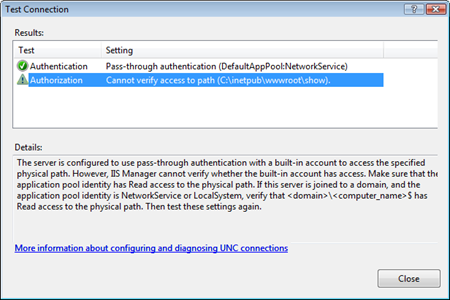 Ok, back to business. When I hit this file I get the quick burst, then throttling hits to slow it down to a value above, but close to, the encoded rate.

If I try the hi-fi version of the WMA, you can see the bitrate is higher, so the throttling is smart enough to slow the bandwidth but it's always higher than the encoded rate so there's no skipping.

Here's what the burst followed by the throttling looks like charted. 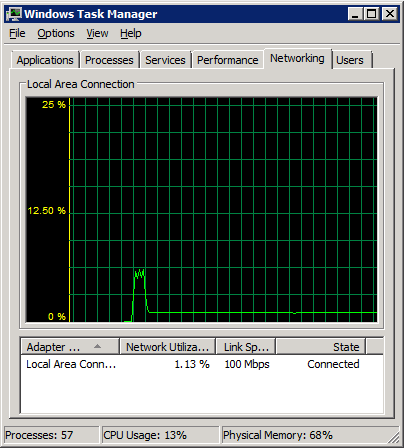 Remember that this is just a stock IIS Web Server plus this new module, so we're not running Media Services or a Streaming Server or whatever.

I thought this was cool and everything, but I immediately brought up the question that some of my users download directly via RSS Readers, while others click the "play now" button and stream. I don't want to throttle the bandwidth for folks who are downloading, just those who stream. However, I'm not running a streaming server (meaning, that everything is over http://, not some mms:// funky port) so I need to differentiate between the two.

I figured there were a couple ways to handle this. I could make different VDirs in IIS mapped to the same files and have BRT (Bit Rate Throttling) turned off on one and on for the other. It'd work, but meh.

How to I write a module? I could make a bin folder and build a DLL, etc, but I could also just make an App_Code folder, apply the appropriate permissions... 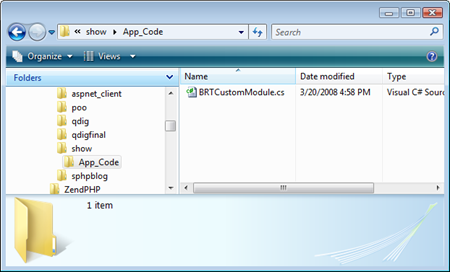 ...and put the source for my custom module in it. I actually wrote it in Notepad.

Basically, I just check for ?download=true on my URL and set my initial send size and rate to really big numbers. (Certainly they could be bigger, come from config, or be calculated by me.)

From the Modules section of the IIS Manager I hit Add Module and my new module shows up. I name it and select it and it appears in the web.config in my /show folder. 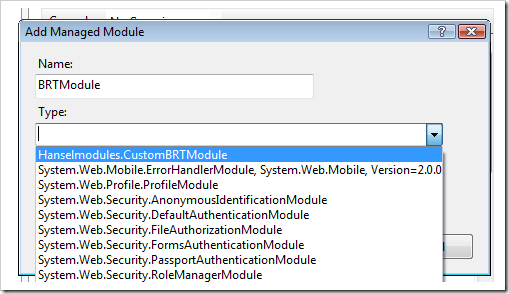 Now, this is just one example. I might want to do something cool with JavaScript that appends the ?download if a person clicks a button, or I might want to "sniff" for browser User-Agents versus Media Players like "Windows-Media-Player/11.0.5721.5145" or iTunes/Zune or the like. It's up to me, as writing the IIS7 modules is easy.

You could even use BRT and techniques like this to throttle bandwidth to data (non-media) files, and give different chunks of bandwidth to different levels of users. My module could have checked if it was a paid user and give them preferred download speeds. Pretty sweet. Now, off to talk to Carl! :)

Comment on this post [5]
Share on Twitter or Facebook or use the Permalink
March 21, 2008 4:38
That's VERY cool. Question since I have not p[ayed with it yet: How is the progress/file download percentage/siimilar logged (or is it)? That would be some truly useful information when it comes to podcasting stats if you're throttling to the encoded rate, I'd think. If you could say 70% of the listeners downloaded more than 90% of the podcast, or something like that.

Great post! I love the way you about solving real problems. I am hoping Carl likes it too :)

Bill Staples
March 25, 2008 10:22
Very nice. I really like the way you make what seems very complex too simple for all folks. Great stuff. Thank you!