Surface Book 2 Developer Impressions and the Magic of USB-C

I recently got a updated laptop for work, a 15" Surface Book 2. It's quickly become my go-to machine, and I'm often finding myself using it more than my main desktop machine.

I considered myself reasonably familiar with the Surface product line as I bought a Surface Pro 3 a few years back for myself (not a work machine), but I am genuinely impressed with this Surface Book 2 - and that surprised me.

Here's a random list of a tips, tricks, things I didn't realize, and general feelings about the 15" Surface Book 2.

After years of "Ultrabooks" I missed an actual high-powered desktop replacement laptop. It's just 4.2 lbs and it doesn't feel unwieldy at all.

There are TWO Surface Connect ports

Legit had no idea. You can charge and dock the tablet part alone.

Which sadly is more than I can say for my iPhone 8+.

Having a 15" screen again makes me wonder how you 11" MacBook Air people can even concentrate.

The high resolution issues in Windows are 90% handled IMHO

I wrote about how running any DPI greater than 96dpi on Windows has historically sucked back in 2014, but literally every little Windows Update and Office update improves it. Only the oldest apps I run have any real issues. Even WinForms has been updated to support HighDPI so I have zero HighDPI issues in my daily life in 2018.

I have had zero RAM issues, and I'm running Kubernetes and lots of Docker containers along size VS, VS Code, Outlook, Office, Edge, Chrome, etc. Not one memory issue. 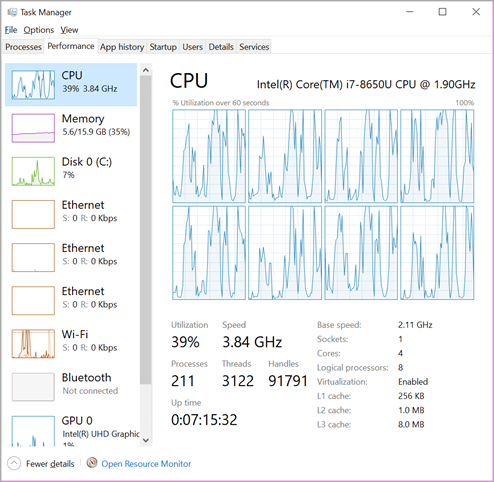 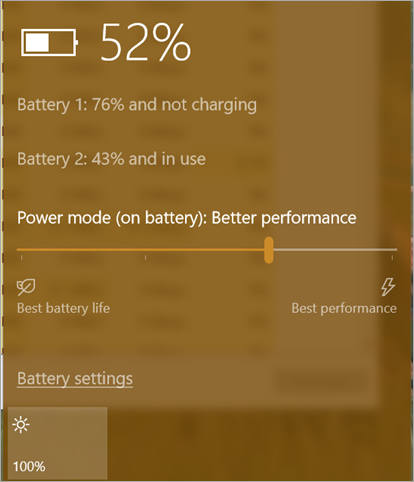 Battery Life on my Surface Pro 3 was "fine." You know? Fine. It wasn't amazing. Maybe 4-6 hours depending. However, the new Battery Slider on Windows 10 Creators Edition really makes simple and measurable difference. You can see the CPU GHz and brightness ratchet up and down. I set it to Best battery life and it'll go 8+ hours easy. CPU will hang out around 0.85 GHz and I can type all day at 40% brightness. Then I want to compile, I pull it up to bursts of 3.95 Ghz and take care of business.

Having a 1080p front facing camera makes Skype/Zoom/etc calls excellent. I even used the default Camera app today during an on-stage presentation and someone later commented on how clear the camera was.

USB-C - I didn't believe it, but it's really a useful thing

Honestly, I wasn't feeling the hype around USB-C "one connector to rule them all," but today I was going to pull out some HDMI and Ethernet dongles here at the Webstock Conferences in New Zealand and they mentioned that all day they'd been using a Dell USB-C dock. I plugged in one cable - I didn't even use my Surface Power Brick - and got HDMI, a USB hub, Ethernet *and* power going back into the SurfaceBook. I think a solution like this will/should become standard for conferences. It was absolutely brilliant.

I have read some about concerns about charging the Surface Book 2 (and other laptops with USB-C) and there's a reddit thread with some detail. The follow says the Apple USB-C charger he bought charges the SurfaceBook at 72% of the speed of the primary charger. My takeaway is, ok, the included charger will always charge fastest, but this work not only work in a pinch, but it's a perfectly reasonable desk-bound or presenter solution. Just as my iPhone will charge - slowly - with aftermarket USB chargers. If you're interested in the gritty details, you can read about a conversation  that the Surface has with an Apple Charger over USB as they negotiate how much power to give and take. Nutshell, USB-C chargers that can do 60W will work but 90+W are ideal - and the Dell Dock handles this well which makes it a great flexible solution for conferences.

Also worth pointing out that there wasn't any perceptible "driver install" step. I got all the Dell Dock's benefits just by plugging it in at the conference. Note that I use a Surface Dock (the original/only one?) at home. In fact, the same Surface Dock I got for my personal Surface Pro 3 is in use by my new Surface Book 2. Presumably it doesn't output the full 95W that the Surface Book 2 can use, but in daily 10+ hour use it's been a non issue. There's articles about how you can theoretically drain a Surface Book 2's batteries if you're using more power than it's getting from a power supply, but I haven't had that level of sustained power usage. Haven't needed to give it a thought.

The i7 has a NVidia 1060 with 6 gigs of RAM, so you can install GeForce and run apps on the Discrete GPU

You can go in and control which apps run on which GPU (for power savings, or graphical power) or you can right click an app and Run on NVidia.

It has an Xbox Wireless Adapter built in

I got this for work, so it's not a gaming machine...BUT it's got that NVidia 1060 GPU and I just discovered there's an Xbox Wireless Adapter built-in. I thought this was just Bluetooth, but it's some magical low-latency thing. You can buy the $25 USB Xbox Wireless Adapter for your PC and use all your Xbox controllers with it - BUT it's built-in, so handled. What this means for me as a road warrior is that I can throw an Xbox Controller into my bag and play Xbox Play Anywhere games in my hotel.

All in all, I've had no issues with the Surface Book 2, given I stay on the released software (no Windows 10 Insiders Fast on this machine). It runs 2 external monitors (3 if you count its 15" display) and both compiles fast and plays games well.

Nicholas
February 15, 2018 13:25
My eyes are too old for that kind of resolution on a 15" screen.
Having said that, the fact that it's a retina display may help - probably need to go and have a look at one somewhere.

Apart from Skype for Business which still can't scaling properly. Which I would forgive but it's a MS product so you'd think they'd have fixed it by now ...

I have a SP3 and use it around home and when working from hotels. I like the SP3 because I can quickly fold the keyboard back to watch YouTube/films and I can type on my lap (although I think the Surface Book will be better for this). I never use by SP3 as a tablet.

Paul Richardson
February 15, 2018 14:34
Have they fixed the problem with the Fn key lock that makes the original Surface Book a pain to program on? i.e. you can't set the Fn-lock to always on so F1-F12 keys stay as F1-F12 instead of brightness/volume/etc. Accidental presses of the Fn key reset the Fn-lock, and they're impossible to avoid if using Fn+Arrow keys for code navigation. Sounds pretty trivial but makes the Surface Book keyboard a real pain on what is otherwise an amazing dev laptop.

Mike Woodhouse
February 15, 2018 15:23
Do you have any issues with your external monitors getting disconnected after your machine goes to sleep?

This only happens with my 4K display (either through HDMI or DP), not if I plugin in a normal 1080p via a VGA. Do you have this same issue?

Eugene B
February 15, 2018 17:53
@Rory, no, the problem still exists. I'm pressing Fn key accidentally 5 times in an hour. It is definitely very annoying.

Daniel
February 15, 2018 19:43
The 15 inch version will be released in april in the Netherlands. The smaller one with 512gb and 16gb ram is about 2900 euro. That's expensive. It's about 1,5 month average income according to the Dutch CPB. How is the US price compared to average income after taxes?

I want to hear the story of why you put Wolf 3D on your Suface Book to begin with.

Sam
February 15, 2018 21:33
That's the problem with laptops. It's hard to find one that has a good balance between features/Performance and price. Almost $4000 CAD is a lot to spend on a computer.

Tim B
February 15, 2018 23:41
I love the hardware but unfortunately you pay a premium for it and it’s hard to make the case vs alternatives.

Matt
February 16, 2018 12:48
I wonder how many of those complaining about the price have iPhones?

The Surface Book is a premium top of the range laptop with specs' that cheap laptops don't even come close to so of course it's going to be expensive. Unlike an iPhone though you can see where the extra money is going.

However an iPhone is massively overpriced - see Samsung S8/S8+ all the same features but also includes headphone jack and expandable storage but costs half the price of iPhone X.

Peter
February 17, 2018 19:26
Can Visual Studio take advantage of the graphics processor? Alternatively, what's the optimal configuration for developing with VS on a Surface Book?

Sean Kearon
February 18, 2018 3:59
Nice review, thanks. I wouldn't hesitate to upgrade from my Surface Pro 5 if it was gifted to me. We did look at these for employees at my work, but for $1k less per machine, we settled on the Dell XPS 15, and so far we're quite impressed with the price-performance.

David Cuccia
February 18, 2018 22:50
Thanks for this great review! I am planning to get one.
How is the integrated keyboard? Can you work full day on it?

TutuApp
February 19, 2018 18:38
I would have considered this if they had used Thunderbolt 3 rather than USB-C.

TB3 or bust
February 19, 2018 19:16
To me, the killer feature of the Surface Book is the ability to detach the screen and use it standalone. You can get devices with most of these other features at a far lower price point. For example, the Razer Blade 14 or HP Spectre x360 15.

I got the Gigabyte Aero 15. It has the GTX 1060, SD card reader, 15in screen, USB-C/Thunderbolt port, headphone jack. It lacks the ability to charge from the Thunderbolt port, doesn't have the integrated Xbox controller adapter or Retina-like display, and has bad camera angle placement. You gain a giant battery, extra storage slot, and per-key RGB lighting, and very slim display bezels. It's not ideal for everyone (certainly not conference presenters!) but I'd just like to remind everyone to shop around and consider the features that are most important for your own use cases.

Mason McGlothlin
February 20, 2018 1:26
It is very informative. I was looking for this article. keep doing great work.

TutuApp
February 23, 2018 16:45
To me things aren't entirely rosey in the USB-C world when it comes to thunderbolt. I'm looking into getting a thunderbolt 3 dock and lenovo laptop with thunderbolt 3. They should work fine together, but what about my work laptop that just has USB 3.1 (with USB-C port)? From all I have read, the thunderbolt 3 dock will not work for any laptops that don't have thunderbolt themselves, even if they have USB-C.

So I can't use the same dock for my home and work computer and I can't say to a visitor 'just plug this cable into your laptop's USB-C port'.

It's then a gamble if I get a thunderbolt dock, because maybe it will go out of fashion in a few years and so I'll have a brick instead of the future-proof kit that I am after.