The 2004 Africa Trip in Pictures

I'm up...actually I was up at 5am.  Can't sleep, so why not post some pictures now that we're home and I've got 3Mbps of bandwidth. :)  We went to a mall called Cresta in South Africa to find an internet cafe.  It appeared that 14 machines in this particular cafe were sharing one 128kbps ISDN line.  Ouch.  Needless to say, Oddpost was unusable, so posting to the blog was unlikely to happen.  Additionally, I didn't have any GPRS support for my Blackberry. :(  So much for the world phone.  It worked in Spain and South Africa (GSM) but was useless in Morocco and Zimbabwe.

I know posting personal pics of trips and such is gratuitous, but it's my family, eh? :) Either way, I hope you find it all interesting.

We stayed with my brother-in-law Vusi at a 'Cluster Home' in Johannesburg.  The most striking thing to me about South Africa is the pervasive and in-your-face security.  EVERYONE has a fence.  And not a white-picket fence, but a concertina razor wire electrified fence.  Security is a HUGE industry.  Automatic doors, alarms, motion detectors.  One of the most interesting and obvious things is that every parking lot has a number of guards.  We went to Makro (Costco) and there were over two dozen security guards watching the cars.  They also help you back out of your spot and you tip them 2 Rand.  The mall itself also has at least a dozen guards.  This is odd since I have only ever seen ONE guard at a mall in the states, and he was guarding Santa.

This is a typical breakfast for the family.  That's beans, eggs and liver.  The Diet Coke (Coke Light) is mine. :) 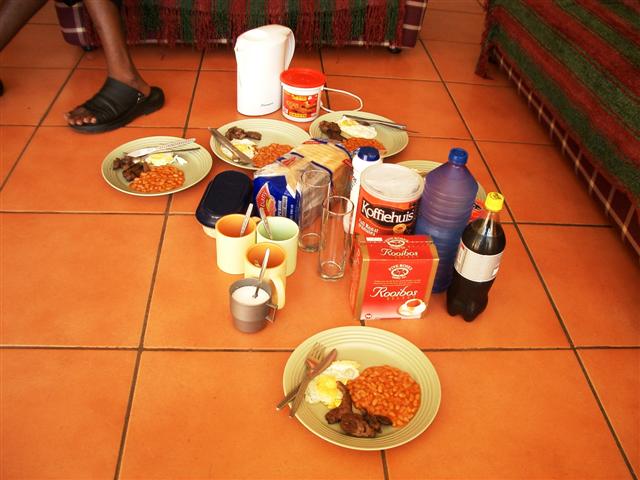 This is Mañana (tommorow).  Mo and I had the pleasure of naming her.  However, everyone calls her uFatty - she's 18 months old.

This is Mo's Mom when we all took the family out to the Market Theater for dinner.  She works very hard and she deserves everything.  She's raised seven kids and raised them well.

This is a wholesale meat market where we picked up a few hundred Rands worth of Lamb and Beef.  You have to buy in bulk or you'd go broke.  They cut the meat in front of you.  Not sure if it'd pass U.S. Health Standards, but then again, does it matter?

I discovered this picture when I was uploading the photos.  Apparently younger brother Bongani got ahold of the camera and wanted to take a look at himself.  This photo just makes me laugh, as Bongani doesn't typically smile.  Looks like he's a closet goofball. :)

Not only is there a 'Portland Store' which is hilarious to me, there's also an 'Oregon Market.'  Madness!

After we left South Africa in a rush we went to Lower Gweru.  Here is the beginning of uNki's grave.

Hundreds of people came from all over to see him honored.  Many spoke and addressed the crowd.  It was a full day's event.  Many of the women sang in a choir for the entire day.

In Bulawayo, there's a rural school that Mo's Mom has taught at for the last 20 years.  Mollar has worked her company to help support the school remotely.  Through their donations and hard work, they've build toilets, a school office and new classrooms.  The next step is getting electricity and running water to the school.

Here's a few happy ones to end on. 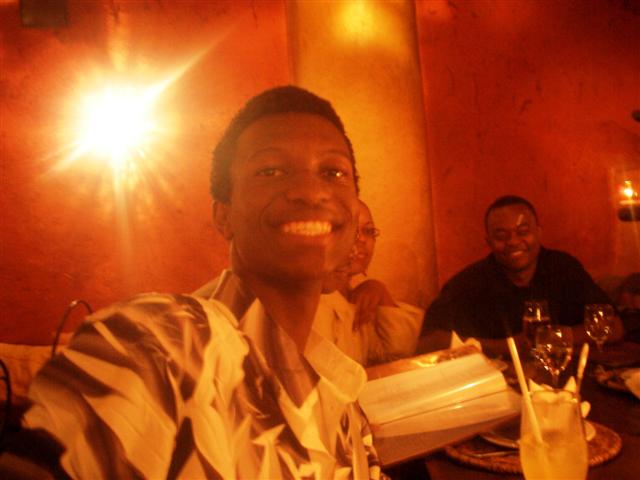 As we look towards tomorrow...

It was a big mind-shift for me when I was in the USA for PDC/MVP Summit, so I can only begin to imagine what it must have been like for you to come to Africa!

vbNullString
May 01, 2004 0:19
Scott, this and your previous post were both breath taking. Thank you for sharing such personal stuff and teaching others about a beautiful family and a beautiful culture. My great sympathies to Mo.

Online Poker
May 01, 2005 10:23
Wow. Scott your pictures reminded me of my own life in africa. I was in malawi (quite close to zimbabwe). These pictures are so breathtakingly similar to malawi. The maize fields, the way people dress. And surprisingly, no matter what their situation, they are always happy and smiling. Even the Portland Store :-) is almost similar to the naming conventions of stores in malawi. They have a Portland Cement.

I recently lost a parent and it's hard to know what to say or think, but it IS nice to know that people out there are thinking of you.