Forgive my sudden switch from Technogeekblog to MassivePhotoblog/Social Commentary, but hey, how often does an Oregonian go to Casablanca?  Depends on who you are, I suppose.

A disappointed salesman of Coca Cola returns from his new assignment. A friend asked, "Why weren't you successful with the locals?"

The salesman explained, "When I got posted in Morocco, I was very confident that I will make a good sales pitch as Cola is virtually unknown there. But, I had a problem I didn't know to speak Arabic. So, I planned to convey the message through 3 posters...

First poster, a man crawling through the hot desert sand... totally exhausted and panting. Second, the man is drinking our Cola. And third, our man is now totally refreshed. Then these posters were pasted all over the place"

"That should have worked," said the friend.

The salesman replied, "Well, not only did I not speak Arabic, I also didn't realize that they read from right to left..." 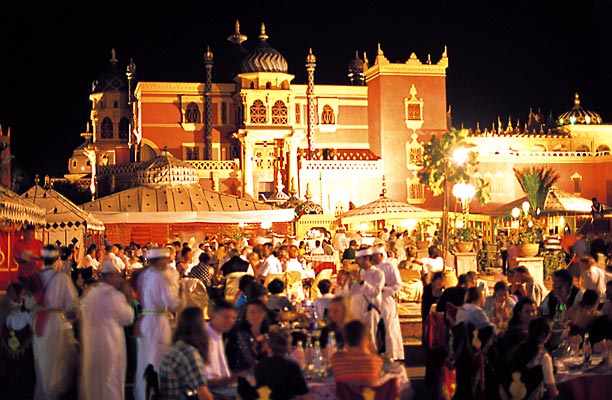 I took this in Madrid, but not before I was admonished by El Al.  Turns out they are Gate B22 and don't take kindly to be photographed.  I won't make that mistake again. :)

Thank goodness we'll have satellite TV. ;)  Gotta have those bare neccesities, a clothesline and 400 channels.

Tiny photos like this can't do the Mosques here justice.  There isn't a wide enough lens to capture the scope and size of this one.  It's immense.  Massive.

Every building here is huge in both height and breadth.  Nothing is done on a small scale.  This is the view from our room in Marrakech.

The Colors here are bright and pervasive.  Everything is bright, upbeat and clear.

The ceiling in the Les Souk a Marrakech were very interesting.  Some were corregated steel, others were braided dried plants.  They worked pretty well for the most part.

Comment on this post [4]
Share on Twitter or Facebook or use the Permalink
April 13, 2004 19:45
Scott- thank you SO much for these photos.It is inspiring me to want to become a better speaker so I can hopefully go to such incredible places someday.

Julie Lerman
April 15, 2004 16:32
Now you can add camel jockey to your résumé. You should have brought Rory along, pour aider avec le français and for more creative applications for the camel...

Nice pictures. We've been to Morocco last year, and I thought it was fabulous. Since I am into digital photography (non-professional), I was amazed by the number of pictures I had when I got home. About 7,5GByte / 2750 pictures. Wow. It was a good decision to bring the laptop!

Have a look here: http://www.rare-it.com/cm/thumbnails.php?album=9

Captions are in Dutch, since I travelled with a Dutch group (hey, I AM Dutch). But you'll recognise some of the pictures. There is more (that's not on the website), but I can't seem to find the time to upload them.