I found a bug in an application I'm working on. I couldn't decide if it's a bug in the ASP.NET MVC Framework or a feature. I knew this, however. Both their code and my code runs exactly as it was written. ;)

First, the behavior I'm seeing, then a pile of unnecessary technical context because I like to hear myself talk, then my conclusion. Regardless, it's great fun!

UPDATE: I've been promptly teased/beaten by the MVC team, as they pointed out, pointedly, is the same behavior pointed out by Ayende like 15 years ago. It was prompted fixed/changed, and the new behavior changes the order (listed below) to 3, 1, 2 as I understand it. I hang my head in shame. ;) It's been totally fixed in the Release Candidate, so this post acts only as my own CSI:ASPNETMVC.

My application does CRUD (Create, Read, Update, Delete) on Dinners. When you are entering a new Dinner object, you fill out a form and POST your HTML form.

We take in the Dinner and save it (I've removed goo for clarity):

The behavior I'm seeing is that ModelState.IsValid is ALWAYS false.

Note at this point that I'm not clever enough to go digging into the ModelState object for exactly why. More on my stupidity later. ;)

See how there's a bunch of Name/Value pairs in there? They mostly line up with the names of properties in my class as seen below. 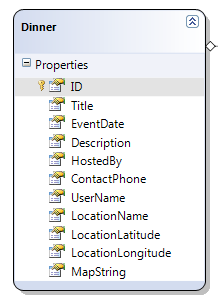 However, note that ID isn't in the Form POST. It's not there because it's an identity, and it'll be created when we save the Dinner to the database.

The New() method takes a Dinner as a parameter. That Dinner is create by the system because using the DefaultModelBinder. That binder looks at the values in the HTTP POST and tries to line them up with the properties on the object. Notice that there's no "ID" in the Form POST. Why is ModelState.IsValid false?

If I look in the ModelState.Values, I can see that the first value says "A value is required." ModelState.Keys tells me that's "ID" and that "" was passed in.

Where did MVC get an ID from and why is it ""? I don't need an ID, I'm in the middle of making a Dinner, not editing one.

Well, it turns out that the DefaultValueProvider, the thing that, ahem, provides values, to the DefaultModelBinder looks in a few places for its values. From the source on CodePlex, note the nice comments:

Seems that while I assumed that the Form POST was the only place that a Model Binder would go looking, in fact, it looks in three places:

The emphasis is mine. At this point I know I'm not seeing a bug, but rather an uncomfortable side-effect of my overly generic naming. I created an ID property on Dinner, but is also have the default route in my Global.asax.cs:

Note the default value for ID. This can be confirmed in the debugger at the same breakpoint I used before. The RouteData collection shows an ID name/value pair, where the value is "".

The DefaultModelBinder saw that an ID was available, but it was set to "", which is different than complete omission. If it wasn't there at all, it wouldn't have been required. If it was set to "A" as in /controller/action/A then I'd have seen a different error of "The value 'A' is invalid." as "A" isn't an int.

I'm going to change my model to use Dinner.DinnerID instead of Dinner.ID so that there's no reuse of tokens between the Route/URL and the Model's property names. Fun stuff! It was so nice to just check the ASP.NET MVC source code to solve my problem. Kudos also to the ASP.NET MVC team for making the source easy to read.

Christian Weiß
December 04, 2008 7:49
Forgive my ignorance...haven't begun using MVC yet. When you say you're going to change your model to use Dinner.DinnerID, does that mean in your class you'll map DinnerID in the underlying ID column in the database? I guess my question is, are you going to be changing the underlying database schema's ID column to be named DinnerID? If so, what if you can't change the schema of the database? I'm assuming this is just at the code level, but just want to be sure. Thanks Scott.

Ayende ran into a similar problem a month ago :)
http://ayende.com/Blog/archive/2008/11/07/reproducing-a-bug.aspx

The only time it should use the RouteData's default values is if it can't be found anywhere else. Otherwise, you model is influenced by the technology that you are using. It's one thing to be influenced because of persistence, but a web framework mucking with you model?

Scott Hanselman
December 04, 2008 11:01
+1 to JustRudd's comments. BTW, there's a bug registered for it at CodePlex, so those that don't like the way the current behavior is, that's the place to go and add your 2 cents..

rod74
December 04, 2008 11:56
I've ran into this a few times and would class it as a bug. It doesn't just affect Id, it has the potential to affect any property name that matches a value in the route dictionary.

Chris
December 04, 2008 13:07
Can't you just tell the ModelBinder to not try and bind the 'ID' value (or explicitly what to try and bind)? I know you can using UpdateModel, I assume you could do the same thing when accepting a Model as a parameter?

huey
December 04, 2008 13:18
It's not a bug. The best way to handle this is to use a "ViewModel" object to represent your form. This isn't fancy. It's basically a DTO that the MVC framework binds from the form for your controller action.

We're object oriented right? A dinner isn't the same thing as an input form that represents a dinner. We should model reality and model the form itself, bind from it and pass it as a message into a service that manages Dinners.

You have allowed the technical implementation of form inputs to impact your domain model in a way that makes changing your model object (Dinner) difficult. Even worse, to a new developer working on the Dinner object, the fact that its identifier must be named DinnerId so that the UI works is non-obvious. After gaining nothing but brittleness, you lose reuse as deriving your model objects from a layer supertype (to share an Id property for example) becomes impossible.

By using a ViewModel form object you gain more: now the UI can use authorization and validation etc. to protect the domain model from corruption.

Matt H
December 04, 2008 13:20
Yeah, I've run into this before a number of times, and it gets quite annoying. RouteData should be the last thing you check. A form post value should always override it in my opinion.

I ended up doing _exactly_ what you did, and as somewhat of an object bigot, I don't like constraints forced upon my objects. :)

Ben Scheirman
December 04, 2008 13:40
Amazingly enough, it looks like GetValue is declared as virtual, so anyone is free to create their own implementation. Of course, that assumes that the DefaultModelBinder provides a nice clean way to substitute a different value provider. Otherwise you have to go all the way and make your own DefaultModelBinder2.

Joshua Flanagan
December 04, 2008 15:05
I know this is nitpicky, but this 'Id' vs 'NnnnId' naming convention is something I've wondered about for a while. Personally, I prefer the name 'Id', since a) it's shorter and b) including the class name is redundant. For example, you wouldn't want 'Customer.CustomerFirstName'. I also agree with the other posters that changing your model to suit the UI smells bad.

We already checked a change into our repository based on his report. Scott, you could have simply asked us, you're part of the Big Blue Monster now, whether you like it or not. Heck, you have access to look at the source in progress if you want.

Christopher Cyvas
December 04, 2008 22:13
I ran into this issue sometime ago, Ayende did also. And for the life of me, I remember that in the first previews, the way it worked was that both the query and form fields would override the default value of the route data. At some point that changed since demos I had working stopped doing so.

I'm going to change my model to use Dinner.DinnerID instead of Dinner.ID so that there's no reuse of tokens between the Route/URL and the Model's property names.

Instead you should change how DefaultValueProvider behaves or override default behaviour with ScottValueProvider.
You don't want to rewrite your business model and the whole application just because of there's inconsistency in some framework.

Dmitriy Nagirnyak
December 05, 2008 10:56
Correct me if I'm wrong, but even with the change to '3 1 2' it would still not solve your problem. You're not passing the ID in the POST data (the 3) so it will still fall back to route defaults (the 1) and you'll be back at ID="". It will fix Ayende's example (as he's passing the ID in the POST) but I'm afraid it won't fix yours (or mine - I got bitten by it too). Or am I missing something?
The way I solved it was to declare a concrete route for my Save action and don't include the 'id' part in it.