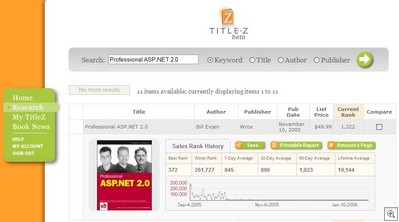 It's written in ASP.NET and has some clever Ajax-like and DHTML behaviors. You can set up your own "watch list" of books as well as great printed reports. It's free now, and they'll charge a small fee when it's out of beta. I can see my editor using this tool.

I'd probably invert the Y-axis on the graph such that a low ranking made the line appear higher and there's a few small problems with stylesheets in FireFox with the printed reports, but otherwise, it's pretty slick for a beta!

He says he's tracking 250,000 titles right now. This is great for authors who want to track their rankings and also for competitive research.