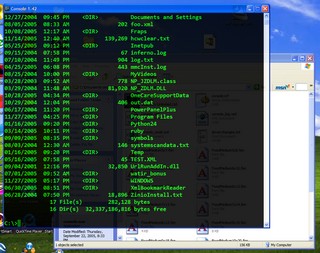 Since I've been working on my Mac Mini lately, I've been very envious of the various small, but effective, things that make the Mac OS such a wonderful place to be.

The #1 UI thing, for me, has been the transparent terminal window. It's silly, sure, but it's nice. So, I went hunting for one. I knew from my previous hunts for the same thing that it was hard, as Window's Console (cmd.exe) prompt is a different kind of Window than most. I haven't found any transparency programs that would let affect cmd.exe.

I did find this clever hack called Console at Source Forge. It isn't a console itself, rather it's a console shadower. Cmd.exe is still doing the work, but Console has hidden it and is capturing and showing the output itself.

Attached is my console.xml settings file with the colors, font (Consolas), size and transparency settings that I like. File Attachment: console.xml (7 KB) The only thing is that I haven't figured out how to make the window resizable. Otherwise, I've found a nice new command prompt to play with. We'll see if it makes the grade, or if I switch back.

Ayende Rahien
November 28, 2005 12:44
I installed it and it's look very nice
but, i tried to run slick run or caputure with Cropper and the program froze ...
I'm back to the original Cmd.exe

M. Becker
November 28, 2005 23:14
Another thing to try might be PowerMenu (http://www.veridicus.com/tummy/programming/powermenu/). It's not too bloated and handles transperency fairly well for any *normal* window. It isn't perfect, but there's no need to wrap your command prompt.

matt shelton
November 29, 2005 2:07
look for n.exe its the problem for the crash (you need to change it to your notepad file)

Dror Engel
November 29, 2005 7:40
The crashing seems to be due to the font name (Consolas) not beeing present on my system. If I swap Consolas for "Lucinda Console" then your XML files works just fine.

Martin Woodward
November 29, 2005 17:38
For the Mac, you should also take a look at iTerm (http://iterm.sourceforge.net/)--in addition to transparency, you get tabs and other goodies.

Rob Warner
December 01, 2005 16:36
You should check out a cool little apoplication called PowerMenu. Allows you to set transparency on more or less any window. http://www.veridicus.com/tummy/programming/powermenu/