It's an old metaphor I've used for years, originally stealing it from comedian Larry Miller, but it's time to use it again, this time in reference to Hard Drives and SSDs.

Sweet wondrous universe, it is. Remember that Lenovo W500 from last week? It's a great machine, truly. The best laptop I've ever had.

Note the 5.9 under Hard Disk. Here's that same machine using the PerformanceTest Disk Benchmark. My computer is the LAST one in each list, the green one, marked "This Computer." I've compared it with other people's results on the same Lenovo. 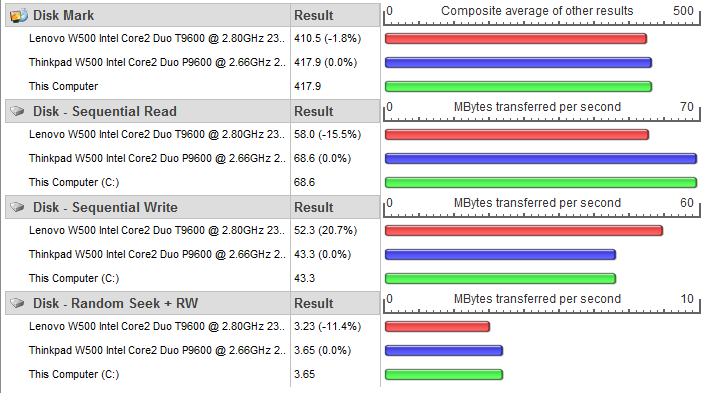 Here's the same machine after I backed it up with my Windows Home Server, put in an OCZ Vertex 250GB Sata II Solid State Disk (SSD) and restored it.

The drive looks to your machine like an SATA II hard drive and it's already the same shape, so I just plugged it in and it was recognized as a Hard Drive. I didn't need to do anything special to get the computer to "recognize it."

Notice the 7.3 (out of 7.9 possible) in the WEI now. Here's the PerformanceTest results: 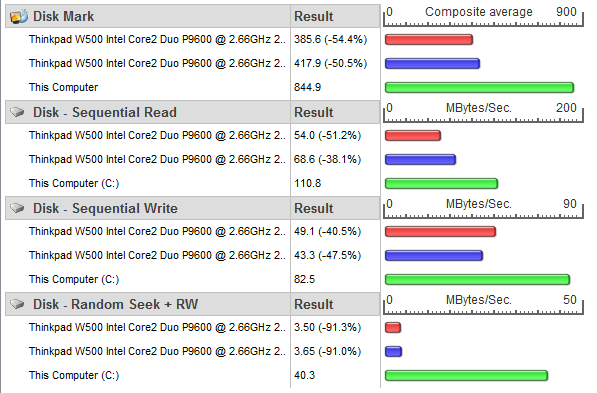 Joel Spolsky SWEARS by SSDs and told me it was the single most important upgrade one could do to take a machine to the next level. I hear he's bought new ones for his whole office. Expensive, a bit, yes, but it looks like my disk speed will be at least TWICE as fast, so you can do the math as to the number of minutes I'll save per day.

My Win7 laptop boots cold to password in 10 seconds now, enter password, then working desktop in 6 more seconds. Woot. I wish I had money to put an SSD on every machine. Here's hoping the prices go down.

About 6 months ago I bought a 60GB for about $150 and the drive is now sitting at my desk cover with dust. For some reason my computer couldn't stop stuttering and the amount of tweaks I had to go through to get this thing at it's "best" potential is not worth the time. I think the problem was that I bought the "cheap" version. So based on my experience I would not recommend saving money on SSDs. At least at this moment.

And I'm with you on the prices going down part... I'd like an SSD but I maxed out my geek budget just buying a good PC without an SSD...

I was originally interested in the Disc on Chip in pc's to increase the boot speed but this seems more practical to me. It will speed up the other programs loading as well. Imagine the load speed of Photoshop.

Chauncey Smith
July 18, 2009 11:46
I put a 128GB Samsung PB22-J in my desktop PC as the OS-and-applications disk, and it's unbelievably fast. An totally worthwhile upgrade for £250. Joel is absolutely right: the majority of PCs are currently hamstrung by their hard drives.

Mark Rendle
July 18, 2009 12:05
Well said, Mark. I have had my hard drives in a dozen machines thrash as much as the next guy, but as obvious as it has been, staring me in the face, you're right - PCs are profoundly Storage I/O bound.

Which cache policy did you use for the ssd device? Its a bit of a cryptic text there.

Edward
July 18, 2009 17:44
Well, one of the biggest problems still with SSDs is, that the performance degrades after time, because SSDs need to explicitly erase a block on the disc before they can use it. This is a time expensive operation. When you buy a new SSD, every block is already erased and the SSD can directly write to it, without performance degradation. After each block was used at least once, the SSD needs to erase a block before it can use it again, which will cost a lot of performance. This is also independent of the free disk space available, since the SSD doesn't know if a sector is still in use by the file system or not.
Microsoft and other Vendors have specified an extension to the original ATA protocol, which allows them to preemptivly erase blocks on disk, which are no longer used by the file system. AFAIK this extension is already supported by Windows 7, but I'm not sure which of the disk manufacturers also support it, especially because while there are many different manufacturers for SSDs, the controller chips that are in use are from the same few manufacturers and are often quite old.

It would be interesting to compare your results from now with the results in a few months. Of course you could also just fill the SSD with garbage once and see if you still get the same results, but I wouldn't recommend that ;-)

Thomas Krause
July 20, 2009 2:28
Thomas points out the issue with the current crop of SSDs - the controller chip. I've had - and loved - a 64GB SSD (Sandisk) on my Dell 1330M XPS for over a year now. I've been looking at the options for my desktop, and from the reviews sites it appears Intel and Sandisk are the only two with good controllers. And the price shows, but like Rick, when the Intel X25-M price drops I'll be there. It's worth the money.

A couple of months ago, I grit my teeth and put down $800 for an Intel 160 X-25...but for whatever reason, defective drive or incompatible bios or something, it didn't work, so I returned it.

Tech spec-wise, the Intel is a better drive but I picked up the OCZ for $340 after rebate so the price was a little easier to stomach.

It's all about finding and removing the bottlenecks and the prices are definitely coming down. The Intel X-25 three months later is $650...

Timothy Lee Russell
July 20, 2009 6:27
We went through a similar exercise not too long ago, performance degraded noticably over a period of about 2 months. We are hoping the superior SSD support in Win7 might help out here but from what I've read the manufacturers are lagging behind in the stability stakes.

Timothy Lee Russell
July 20, 2009 20:12
I came to the same conclusion a few months ago:
http://codebetter.com/blogs/patricksmacchia/archive/2008/12/04/solid-state-drive-enhance-developers-productivity.aspx


SSD is a must-have for every professional developer.

Patrick Smacchia
July 20, 2009 23:21
Nice post, Scott. I linked to your post from my SSD Forum. Even if compile time is not shortened, you can see that SSDs increase productivity in many other ways. http://solidstatedrivehome.com/forums/index.php?topic=18.0

Mike
July 21, 2009 17:19
Have you also considered using a RAM disk? Jeff Palermo has recently implemented them and is pleased with the results. He's actually using them instead of SSDs, but I don't see why you couldn't do both. Developing off of the RAM disk should improve even compile time. Here's his blog about it...
http://jeffreypalermo.com/blog/running-development-from-a-ram-disk-ndash-options-and-products/

BTW the 120 gig OCZ Vertex drive is faster then the larger OCZ Vertex drive. Also its very important you use the latest firmware as firmware updates have increased the speed and added functionality like support for the Trim function Windows 7 uses to keep SSDs running fast

Zac Harlan
July 28, 2009 10:56
which are no longer used by the file system. collector-solar.com AFAIK this extension is already supported by Windows 7, but I'm not sure which of the disk manufacturers also support it

mark
August 04, 2009 21:15
Being cheap AND space hungry (lots of virtual machines). I chose to take the DVD drive out of my laptop (MacBookPro) and replace it with a second 320gb drive and then create a RAID 0 array.

Not as fast as an SSD, but still a big performance improvement AND 640GB of disk space. :-)

http://blog.scrappydog.com/
August 06, 2009 2:40
Would be interesting to hear what you / Jeff think about Readyboost & VelociRaptor combination vs. SSD on a desktop.

Agree that for a laptop there's no better way to go - SSD for the win! I recently added a Western Digital Scorpio Black to my Dell XPS laptop and it chews through the power - battery life just over an hour if I'm lucky

https://www.google.com/accounts/o8/id?id=AItOawmYpH_3dllA4eYniEcpystUz6MlKj2FiXM
August 15, 2009 0:30
Nice Scott, I got a Samsung SSD for my E6400. You boot from VHD?
Is this not a REAL problem with the SSD? The SSD need TRIM If you don't want to loose performance over time. On a SSD with a VHD a delete of a file dosen't realy delete a block on the disc? What's your experience with this?

Bernhard
February 03, 2010 1:52
I have the same laptop a W500, and it is actually one of the lower experiences that I have had with a new laptop. It only gets a 2.5 rating for hard disk, drammatically different than the 5.9 you get before SSD. I am running Windows 7 64 bits. Any ideas, why the HD could be so different on the same laptop model?