James Clarke from the Windows team rolled into a meeting today with two Surfaces...but one had no keyboard. Then, without any ceremony, he proceeded to do this:

Now, I consider myself a bit of a Windows Productivity Tips Gourmand, and while I was aware of Miracast and the general idea of a Wireless Display, I didn't realize that it worked this well and that it was built into Windows 10.

I usually travel with a main laptop and a backup laptop anyway. Why do I lug this extra LCD around? Madness. I had this functionality all the time, built in.

Use your second laptop as a second monitor

On the machine you want to use as a second monitor, head over to Settings | System | Projecting to this PC and set it up as you like, considering convenience vs. security. 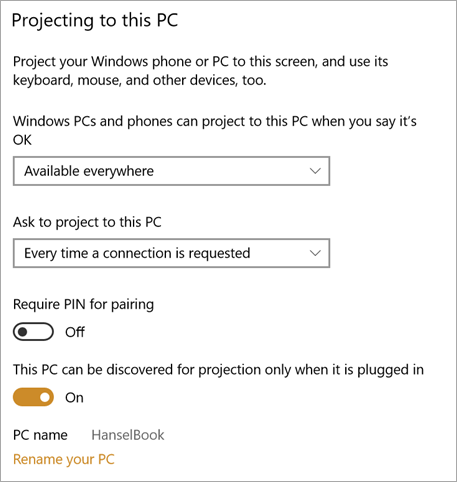 Then, from your main machine - the one you are projecting from - just hit Windows Key+P, like you were projecting to a projector or second display. At the bottom, hit Connect to a Wireless Display. 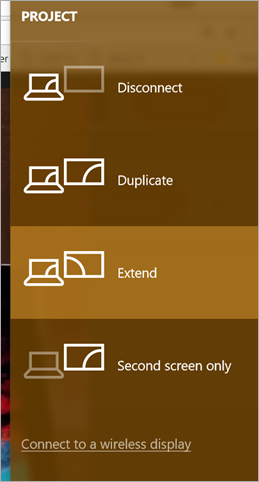 Then wait a bit as it scans around for your PC. You can extend or duplicate...just like another monitor...

...because Windows thinks it IS another monitor.

You can also do this with Miracast TVs like my LG, or your Roku or sometimes Amazon Fires, or you can get a Microsoft Wireless Display Adapter and HDMI to any monitor - even ones at hotels!

NOTE: It's not super fast. It's sometimes pixelly and sometimes slow, depending on what's going on around you. But I just moved Chrome over onto my other machine and watched a YouTube video, just fine. I wouldn't play a game on it, but browsing, dev, typing, coding, works just fine!

Get ready for this. You can ALSO use the second machine as a second collaboration point! That means that someone else could PAIR with you and also type and move their mouse. THIS makes pair programming VERY interesting.

Here's a video of it in action:

Literally just learned from @Clarkezone that I could use an extra laptop AS AN EXTENDED MONITOR. Built into Windows 10! pic.twitter.com/5djg4eCYja

Give it a try and let me know how it goes. I used two Surfaces, but I also have extended my display to a 3 year old Lenovo without issues.

Comment on this post [19]
Share on Twitter or Facebook or use the Permalink
October 18, 2017 11:19
And only wireless? I docked my surface next to my desktop and gave up on this since they use wired network. (Use km-switch at least with mouse without borders.)

Grastveit
October 18, 2017 13:01
Cool! Just checked it out using my desktop and laptop and it worked reasonably well, I had to launch the "Connect" app on the device getting projected too, but other than that it worked fine. Both machines were using Nvidia graphics too.

ThatBlairGuy
October 18, 2017 22:22
I've got an old Alienware laptop hooked up to the main TV (we use it as our media center and Minecraft server).

It's set up so that when we play D&D the GM can 'cast the map, illustrations, and whatnot to the screen using that very function.

Didn't know about the input sharing though - that would make it easier to run updates and that sort of thing from my regular PC instead of the tiny media center keyboard.

AnonJr
October 18, 2017 23:50
My desktop monitor doesn’t respond to the hdmi input from my laptop, so will try this tonite!

bob
October 19, 2017 11:46
I use linux mint and chromium with the media router extension switched on in chrome://flags on my laptop. That enables me to cast a chromium tab or the full desktop to any compatible device which might be directly connected to the laptop or in WiFi range..one of those devices being my sony bravia android TV.

Other set ups and devices are available..

Joe
October 19, 2017 11:50
Wow, I wish I had known this before ! Is there any way NOT to also connect the sound though ? When extending a display I want to keep using the speakers of my main computer, not the ones from the old laptop on which I extended my display...

David
October 19, 2017 13:13
Tried some solutions over the years but unlike those this is easy to setup and working like a charm! Default the audio is sent to my connected laptop as well, but setting the audio playback device back to my main machine solved that. Thanks for this tip!

Jaap
October 19, 2017 13:53
Any word if this works on the Surface RT's Scott?
This would make a really cheap option for a small, high resolution portable monitor with great battery life.

John Garland
October 19, 2017 22:30
@Grastveit, thanks for the link to Mouse Without Borders. I was trying out the solution Scott provided, thought "meh, not to bad, but I'd prefer to use the desktop directly on my surface using my mouse and keyboard" and am super happy with Mouse without Borders. I actually started to think about how it could be realized, even better to find it production ready for free!

Marc Wittke
October 20, 2017 0:30
@David, yes, you can change where the audio is output from, just go into your sound settings/playback devices and set back to where you want your sound output from.

@Grastveit, I have it setup on my Suface Pro 4 / Acer Aspire V5-571P (around 5 years old, , both connected to my network via ethernet

Chris Jones
October 20, 2017 16:47
Hi Scott, nice tipp!! I will try it although my experience with Windows 10 and Miracast is not that good. I used a Samsung TV with both my Laptop and a Phone (both with the "old" kernel). I upgraded my laptop to Windows 10 and my remote display with the Samsung TV stopped working. The same thing happened after I upgraded my Nokia 930. My experience has been bad with the remote display functionality in Windows 10.

amin
October 30, 2017 21:22
This has been a cool thing in the Connect app since, uh, Anniversary Edition I think? Looks like in Fall Creators Update they made it more "built in" and less "launch an app." I've used it a bit with my Windows phone to get Office on a laptop without Office.