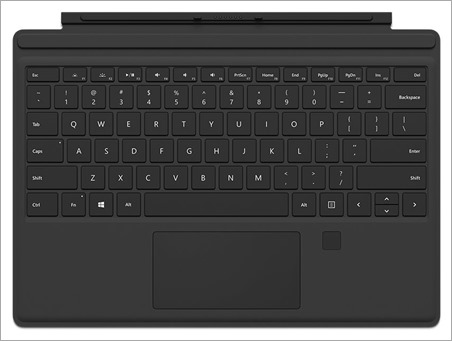 Last year in August I went and bought a Surface Pro 3 with my own money (it's not machine that work paid for) and I've been very happy with it. Now the Surface Pro 4 came out, and well, it's silly to upgrade for me when it's been just a year.

But. That Keyboard. The Surface Pro 4 has an all new Keyboard and Touch Pad.

The Surface Pro 3 keyboard is good, to be clear, but the touchpad sucks. After I used it for a few months I called it out as sucking. It's usable, but it's not fun to use.

Turns out that you can get a Surface Pro 4 Type Cover keyboard and it works and fits perfectly on a Surface Pro 3. You can upgrade your Surface Pro 3 (and pretend it's a 4, which is what I'm doing) by just adding the new Keyboard.

There's lots of new color Type Covers but the really interesting one is the Type Cover with Fingerprint Reader. Sadly, only available in Black, but it has an integrated Fingerprint Reader that lets you use the new "Windows Hello" login feature of Windows 10. Windows Hello means "using biometrics like fingerprints and faces and eye scanning to login to your computer." You enroll as many fingers as you want in Sign-In Options and that's it. Now you log in with your fingerprint. Lovely.

All new keyboard and touchpad

The picture before shows my original Surface Pro 3 Type Cover next to my new Surface Pro 4 Type Cover with Fingerprint Reader. First, the keyboard was already good on the Surface Pro 3, but it's just better on the 4. There are actual spaces between the keys, and you can see from the pic how the keys go even closer to the edge/bezel of the cover's surface. The keys are also slightly rearranged for the better. FN has been moved to the left, which makes sense, and a "context key" (which is effectively Shift-F10).

Another nice touch is that the FN key now has a light. On SP3 you had no way to see if it was locked, and you had to FN-CapsLock to force it on, and would have no visual indicator.

Finally, the silly Share and Settings secondary functions for Function F7 and F8 are gone and there's now an actual PrtScn button. It's the little things. 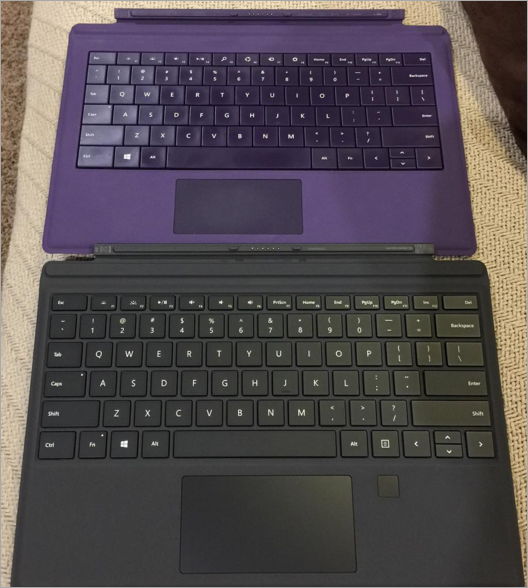 Now, to the touchpad. IT IS SO MUCH BETTER. It's actually usable. It's way larger (they say 40%) and it feels nicer. Before I always took another mouse with me because the SP3 touchpad was crippling. No longer. It's large enough for multi-finger gestures, including 3 and 4-finger taps. I'm still holding out for a "4 finger swipe" for Virtual Desktop switching, though.

One other subtlety that is worth pointing out...the fold. With the Surface Pro 3 Type Cover keyboard, when you fold it up to keep the Type Cover off the table, the fold makes it hard to press the "Start Button" on the screen because the keyboard butted right up against the screen. The Pro 4 Type Cover folds tighter and lower against the bottom bezel such that pressing icons in the taskbar and the Start button isn't a problem anymore. Subtle, but again, it's the little things.

I totally recommend this keyboard. It's given my Surface Pro 3 new life. It's the keyboard it should have always had.

* My links are Amazon Affiliate Links! Use them as they help support my blog and buy me tacos.

Comment on this post [21]
Share on Twitter or Facebook or use the Permalink
November 03, 2015 0:42
I have a SP3 too and love it. I so want the new type cover. I have Cerebral Palsy and I am not able to use one of my arms / hands. As a result, I am not able to shield the hand typing my pw or pin. With Windows Hello, I am looking forward to the increased security.

Steven Luker
November 03, 2015 0:50
I'm not a trackpad user, preferring desktops with a mouse. Are there no custom gesture settings where you can set up a four finger virtual desktop switch? The switching mechanism puts me off using the virtual desktops of windows 10, but I love the concept.

The new keyboard looks and sounds awesome. Maybe its time to trade up from my surface rt...

Also, now you've got me hankering for some tacos. I think I know what's for dinner tonight.

Max
November 03, 2015 1:30
Is the keyboard still as loud? I have always felt like the surface 3 keyboard is extremely loud.

Harry McIntyre
November 03, 2015 12:39
I have heard the fingerprint is only available on systems where PIN-login is configured. This seems a little silly, to have the complexity of a fingerprint on one hand but only if you allow the bypass with a PIN that can be only 4 digits long...
Also unfortunately not available in europe yet :(

Nils - That's up to your enterprise. Mine is 6 digit pins, some are 8.

Harry - Yes, it's the same size and fits perfectly.

Max - That feature is coming next year, I'm told.

Scott Hanselman
November 03, 2015 16:59
Can't wait to get my hands on one, looks really good. Hoping they release the fingerprint one in the UK as well.

James Dunkerley
November 03, 2015 18:01
The additional of the context menu key is huge for. I know a lot of people never use that key but it's one of my favorites! I use it extensively in Windows Explorer, Visual Studio and a few other programs.

Kevin Adams
November 03, 2015 19:43
Thanks for the blog post; exactly what I'm thinking of getting. The Pro4 screen is .3" bigger than the Pro3; it's a little bit hard to tell from your picture whether the Pro4 keyboard is physically larger than the Pro3 one. Is it?

What does this look like when you close over the Surface Pro 3 onto the Pro4 Type keyboard? Does any part of the keyboard "stick out" awkwardly?

John Maguire
November 03, 2015 22:45
John - There's no sticking out. The Pro 4 screen may be larger because the Bezel is smaller. I promise this keyboard fits great.

The dimensions of the SP3 and the SP4 are identical. Even the case makers are selling the same cases. The cover fits the SP3 perfectly.

I want to also mention a major difference between the SP3 and the SP4: the beautiful display. The SP4 doesn't only have a larger display panel, but it also has a higher pixel density. The moment I turned it on, I could see a big difference.

Thanks Scott for your review. Also, did you know the SP4 pen works flawlessly with the SP3? Holy cow, the SP4 pen is waaaaay better than the SP3. It can be bought a la carte and comes with a variety of different pen tips. The eraser feels like a real eraser when rubbed on the screen, and the tips grip the screen much more like a real pen would grip paper. And the sensitivity seems much more realistic on the SP4 pen.

Between the amazing keyboard and the perfect pen, Microsoft appears to finally have a winner. I am so happy they chose to make new accessories compatible with older hardware.

Eric Oakley
November 04, 2015 9:33
Great review!
Thanks for confirming my suspicions that this keyboard is an excellent upgrade to the Surface Pro 3. Too bad there is no ETA for Germany for the keyboarding including the fingerprint reader. Microsoft's customer sales people could not help me either. They could not even tell me which other products are "Windows Hello" compliant.
Really grateful that Microsoft made the new keyboard fit perfectly on the Surface Pro 3; but I am sad for geo-availability or news about the availability of their products.

Johan
November 05, 2015 4:44
The one important question that comes to mind after reading this post. Where do you buy tacos?

Adam Wright
November 05, 2015 21:19
Is your "review" applicable to both the type cover with and without the fingerprint reader?

John Stemper
November 06, 2015 3:29
John Stemper - Absolutely. The SP4 Type Cover keyboard is LIGHT YEARS better for the SP3, with or without the fingerprint reader.

Scott Hanselman
November 16, 2015 16:37
Thanks for the great words on the new Fingerprint SP4 Cover, however one more question: the advertising for this indicates that you can you your fingerprint for other online websites, i.e. banking, credit cards for easy access-do you know anything about this function?

Jason Badger
November 28, 2015 13:51
It seems exciting that we can use Pro 4 cover on Pro 3 but I would test it. You wrote truly a informative post here. I am going to share it on my site.

Deepak
December 29, 2015 17:09
I put this on my Christmas list per your recommendation. Love it. Great feeling keyboard, much better than the 3.