Visiting The National Museum of Computing inside Bletchley Park - Can we crack Enigma with Raspberry Pis? 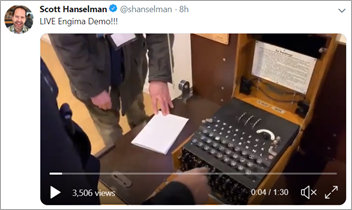 "The National Museum of Computing is a museum in the United Kingdom dedicated to collecting and restoring historic computer systems. The museum is based in rented premises at Bletchley Park in Milton Keynes, Buckinghamshire and opened in 2007" and I was able to visit it today with my buddies Damian and David. It was absolutely brilliant.

I'd encourage you to have a listen to my 2015 podcast with Dr. Sue Black who used social media to raise awareness of the state of Bletchley Park and help return the site to solvency.

The National Museum of Computing is a must-see if you are ever in the UK. It was a short 30ish minute train ride up from London. We spent the whole afternoon there.

There is a rebuild of the Colossus, the the world's first electronic computer. It had a single purpose: to help decipher the Lorenz-encrypted (Tunny) messages between Hitler and his generals during World War II. The Colossus Gallery housing the rebuild of Colossus tells that remarkable story.

We saw the Turing-Welchman Bombe machine, an electro-mechanical device used to break Enigma-enciphered messages about enemy military operations during the Second World War. They offer guided tours (recommended as the volunteers have encyclopedic knowledge) and we were able to encrypt a message with the German Enigma (there's a 90 second video I made, here) and decrypt it with the Bombe, which is effectively 12 Enigmas working in parallel, backwards.

It's worth noting - this from their website - that the first Bombe, named Victory, started code-breaking on Bletchley Park on 14 March 1940 and by the end of the war almost 1676 female WRNS and 263 male RAF personnel were involved in the deployment of 211 Bombe machines. The museum has a working reconstructed Bombe.

Now, decrypting the Enigma with the Bombe (and a crib, and some analysis, before the brute force starts) pic.twitter.com/OJsoMYXYhj

I wanted to understand the computing power these systems had then, and now. Check out the website where you can learn about the OctaPi - a Raspberry Pi array of eight Pis working together to brute-force Enigma. You can make your own here!

I hope you enjoy these pics and videos and I hope you one day get to enjoy the history and technology in and around Bletchley Park.

Sponsor: Check out Seq 5 for real-time diagnostics from ASP.NET Core and Serilog, now with faster queries, support for Docker on Linux, and beautiful new dark and light themes.

Comment on this post [3]
Share on Twitter or Facebook or use the Permalink
February 02, 2019 12:54
I live near it and have been visiting on and off over the past 25 years (since before it became the The National Museum of Computing). It's a fascinating place with lots of things to see and experience. There are events on throughout the year. I'm glad you saw it and had fun :-)

Paul Richardson
February 06, 2019 9:42
I go past here regularly on the way into MK, I really should get round to going. It's the usual problem of because it's close you don't really see it as an exciting thing to do! Same as with going into London, it's close but a hassle so you don't go often.

Chris Pearson
February 12, 2019 19:11
Scott,
Thanks for the post. I have a strong sense you had a GREAT time at the museum. Glad you were able to go. Thanks for regularly posting on the blog. It's one of my go to sites every week. You always manage to have some interesting adventure.

All the best,
John