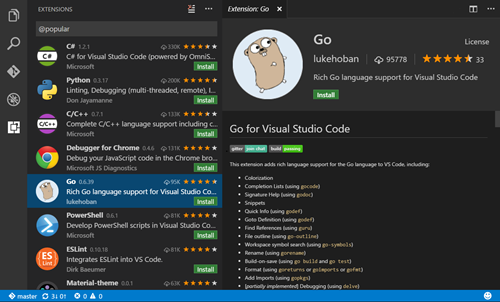 I've been a fan of Visual Studio Code (the free code editor) since it was released. But even though it continues to update itself as I use it, I didn't really grok how much cool stuff has been going on under the hood.

As of this writing. VSCode is on version 1.7.1. Here's the highlights of this new version:

But the REAL star and the REAL magic in VS Code - IMHO - is the growing VS Code Extension Gallery/Marketplace. Go check it out, but here's just a taste of the cool stuff that plugs nicely into Visual Studio Code.

What are your favorite VS Code extensions?

Sponsor: Big thanks to Telerik! They recently published a comprehensive whitepaper on The State of C#, discussing the history of C#, what’s new in C# 7 and whether C# is still a viable language. Check it out!

Peter
November 15, 2016 14:01
This isn't really an extension, but something I found very useful for me (especially as I have visual impairment: Fira Code - https://github.com/tonsky/FiraCode

It's effectively yet another programming font, but with a twist - it uses font ligatures to create distinct glyphs for the usual multi-character sequences (like =>). Visual Studio Code is supported and, after a quick adjustment period, I find it makes reading any code, be it C#, JS or even HTML, much easier on the eyes.

Robert
November 15, 2016 14:58
The speed and languages supported. It is something between Notepad++ and Visual Studio, but if you don't do full blown C# for example Visual Studio is to much, I do C#, Powershell, CSS, json, xml and others, VSCode is way better for fast and multiple instances of editors.

Richard
November 15, 2016 17:39
@Robert, Visual Studio Code is a lightweight code editor, not an IDE. You'd want to use it anytime you'd use something like Notepad++... and more, actually. For things like PowerShell scripting, simple web development, writing markdown, scripting, etc., the agility of VS Code outstrips VS. Even if you prefer VS for some of what I mentioned, there's simply no denying that there's times a simple editor is preferred, or do you never use Notepad or one of it's many replacements?

wekempf
November 15, 2016 17:48
@wekempf
I never use any Notepad variation for development because typically I on projects that involve multiple file types, i.e. I don't do just C#. I'm typically editing C#, CSS, HTML, node.js etc... all in one.

In addition I guess the question stems from this article about extensions that add back functionality that VS already has.

My question towards start of comments - is that VS seems to be getting slower earlier versions were not as slow as VS 2015, I've not tried the 2016 preview yet so perhaps the changes they've been working on related to speed will solve all that. I'm hoping that the VS and VSCode are not the same team.

Version Lens - Shows the latest version for each package using CodeLens (works with package.json as well as project.json)

Eric
November 15, 2016 18:44
VSCode is an attempt by Microsoft at getting Mac and Linux developers as well as Windows (people without VS). This along with all the open source coolness has made for some exciting changes. Makes .NET an option for a large percentage when in the past it was not.

ChrisGo
November 15, 2016 18:46
@Peter they aren't the same team. I believe the biggest reason for VS becoming slower is due to the use of Roslyn. In particular, if you have a very large project with really large source files things can become unbearably slow. I wouldn't give up the functionality we get with Roslyn, though.

There's your "notepad", along with Intellisense and all the syntax highlighting for virtually any language you'd want to use. I get Mac or Linux development, but for Windows I'm struggling to come up with a good use case for it over VS proper. I'm reading "heavy" but maybe I'm just spoiled on decent 16 gig SSD machines (which seem reasonably affordable today) both at home and work? That heavy feeling I felt before going SSD has completely gone away for me. It's not unusual for me to have 5 or even 10 instances of Visual Studio open at work, and I don't hesitate to fire up another one to "test something" if the new file thing won't suffice.

Vitoc
November 15, 2016 20:55
Some people have said my extension 'SnakeTrail' is good for presentations. I like it for just coding.

Just want to clarify, are all the extensions in the market store are genuine and verified by Microsoft? Don't want to install something on my machine from some random person which potentially is a security risk.

No, extensions on the marketplace are not "verified" by Microsoft as far as I know (maybe they have some static analysis or something, but I doubt it). FYI, this is the same for the Visual Studio (not Code) marketplace as well.

Alex
November 16, 2016 9:49
@Alex- it definitely makes sense to install VsCode because it's like notepad if you need change your CSS or anything instead of opening full visual studio you can do it.Also, now there are so much support for C# sometime I feel that you even don't need full visual studio also.

Jalpesh Vadgama
November 16, 2016 9:49
@Alex- it definitely makes sense to install VsCode because it's like notepad if you need change your CSS or anything instead of opening full visual studio you can do it.Also, now there are so much support for C# sometime I feel that you even don't need full visual studio also.

Jalpesh Vadgama
November 16, 2016 10:49
Recently I have used VS Code much more than the full blown Visual Studio, because it is much faster (even on my 16 GB SSD machines). It also fits the "the folder is the Project" approach better that is used in web development and can use the same configuration files than the rest of my toolchain.

Regarding extensions: I got used to the CTRL+D shortcut from ReSharper and Notepad++ that duplicates the selected text. I have written an extension that adds the same behavior to Visual Studio Code: Contextual Duplicate

Other extensions I cannot live without are:

Lars
November 16, 2016 14:26
@ChrisGo
On Windows there is the VS Communtiy edition which is effectively VS Pro for small (5 or less) teams or hobbyists, therefore VSCode in terms of functionality is not needed for Windows users.

Peter
November 16, 2016 16:45
@Peter, I can't agree. I live in both all day long. Visual Studio for larger C# projects, and Visual Studio Code for nearly everything else.

wekempf
November 16, 2016 18:49
@Arul, what do you mean by "best way to write markdown"? Markdown is supported out of the box. There's a markdownlint extension I use as well. This covers most of what one would want. There's lots of other markdown extensions as well, so it all really depends on what you're looking for specifically?

wekempf
November 16, 2016 19:27
Just in case it's useful to anyone, I released a project yesterday that I've been working on for some time, and that really resonated with a lot of folks yesterday, quite unexpectedly.

It's nightly builds of VS Code for Chromebooks and Raspberry Pi (ARM and Intel packages).

These builds aren't exactly matched to the Insider builds, but they're the same idea (code cut once a day, tested, packaged and deployed).

Hope someone finds it useful. Would love to hear your thoughts on this Scott!

Jay Rodgers
November 16, 2016 19:34
Personally I prefer Visual Studio code for writing Angular (1 and 2) apps. It works much better with Typescript.

Matt
November 16, 2016 23:16
I like VSCode and have moved from Sublime to VSCode. But it is still a bit rough around the edges. The most grating thing so far is the lack of drang and drop of text - see https://github.com/Microsoft/vscode/issues/1046

Given that I already have VS 2015 open for working on the C# bits why would I open another app to work with files that VS 2015 already has open?

Is the SASS/CSS and JS editing features of VSCode dramatically better than VS2015? If not or it's simply on par then I honestly see zero reason to have it in my scenario. Having a 2nd app open mimicking what the 1st app does is a waste of resources.

Given all the comments here I might install it just to see what it's like once my 2nd hard drive or new computer turns up from sysadmin. At present what with my SQL Server DBs and other apps installed my only drive is near constantly low on disk space, :P

Peter
November 17, 2016 20:07
I started playing around with Visual Studio Code shortly after it was released, but I have been sticking primarily to Visual Studio 2015. However, I just found an excellent course on pluralsight about creating a Javascript Development environment using VS Code by Cory House, and I am really starting to love the experience of developing with the slimmed down program. You mentioned a few features I have missed that I am really excited to check out!

Drew
November 22, 2016 0:27
Thanks for this post. I'm getting started in the Mac environment and have been looking for a code file editor.

Fergal Moran
November 25, 2016 22:16
Not an extension, but I am a huge fan of the keybindings. I added a couple to make working with the treeview easier. I pasted them below for anyone interested :-)

Willem Meints
November 30, 2016 15:39
Wow, Scot you made my day by this info. Why am I so much excited about VS Code is? Actually, I was looking for a comprehensive code editor for my web projects. Thankfully now I got a good one via VS Code. I am gonna try it for now. Looking forward to seeing what's exciting inside.
Best regards
#NasirPiya

Nasir Piya
December 01, 2016 9:00
I started using VS Code recently in anger for node dev and I love it, so much so that I am no longer using Sublime. The syntax completion and debugging are great, it opens fast, and ever since tabs made it in, I am a very happy camper. Add to that the inline terminal window. Job well done Microsoft!

Glenn Block
December 07, 2016 23:19
I wrote the VSCode extension for highlighting the syntax of Zeus Z80 assembler files from my old ZX Spectrum computer. This couldn't be done so easy on VSPro. So VSCode has an incredible customization power.

Kirill
December 08, 2016 17:42
Visual Studio has been the programming language ever, its easy and very user friendly.