Remind me to tell you some time why the IIS team is so evil clever. It' cool to see the first steps of a master plan to make things awesome start to come to fruition.

I've said over and over that IIS7 is rocking sweet and once you start using it, you'll never want to go back. It's all part of the whole /web platform and it's always been ridiculously tedious to install. It's getting WAY easier, all as part of a super-secret master plan I can't tell you about or I'd have to kill you.

Seriously, the Web Platform Installer, or Web-PI, hit Release Candidate last night. The #1 complaint on my last post about this was that it didn't support XP. Bam: 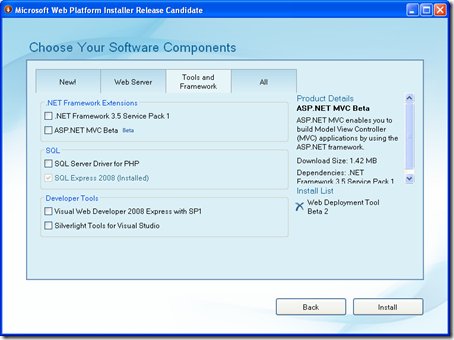 Web-PI's got a number of cool things, but one subtle one you might take note of is the Web Deployment Tool Beta (MSDeploy) that I mentioned before. This tool makes it very easy to package up all the configuration schmutz of your application and (re)deploy it elsewhere. As such, it supports synchronizing your sites and applications across server farms, which was a huge problem for me when I was in banking. It integrates nicely with IIS Manager too.

Also of note is the inclusion of ASP.NET MVC Beta as an option, as well as URL Scan 3.1 and IIS 7.0 manager which lets you manage IIS7 from non-IIS7 machines like, ahem, XP machines. Basically all the things that were hard to find, now, less so.

Now, my first worry when I saw this was, "well, some small team is doing this applet and it's neat and all but soon it will fall into disrepair and fade away, like calc.exe." Well, I just got a personal call from Bill Staples who manages all this stuff and he told me

He then proceeded to tell me the master plan and it was good™. I can't tell you, but I'm working on ways to tell you without Bill firing me. Regardless, there's some cool stuff coming in the /web space. It's very tidy, very open, very clean, very sourcey, very appy, very nice.

Dirk
November 24, 2008 22:54
I can't tell whether I am more intrigued by part of what you've implied about the "master plan" through your post (it certainly would be a *very* different Microsoft we're talking about), or the fact that you dropped a Kool Moe Dee reference.

Justice~!
November 24, 2008 23:22
What is the functional need for Web PI and Web App to be separate? I think this is interesting, but think it needs to be rolled into a bigger "App Store" type experience for Windows. For example, this post has 2 intaller/updaters (Web Platform and Web App). Then, you have Microsoft Update and Windows Update. Then Norton updater, Apple Updater and Adobe Updater. Then, everybody and their grandma has their own clickonce-alike updater. Speaking of grandma, I have to tell her NOT to click some "You have updates", but TO click others, and this all makes it harder. (Ok, she doesn't have the Web Platform Installer, but you get my point - it's a usability and security risk having this many updaters)

What would be nice is to reign in some of that by providing a good experience to find, configure, install, and maintain all kinds of apps - MS stuff, and 3rd party, server apps and desktop apps, free and pay. As a dev, I go there to get tools or to install starter kits on my client's new server. As a home user, I go there for the latest BabySmash Pack. It's app-get, but cooler.

So tell Bill if that's what's coming to give us a little Robot.

Anyone recall that site that used to scan your computer and check for any updated versions of all the software installed on your machine? That's exactly the kind of site that needs to be brought back ...

@anyone who will listen: It would be nice if the Windows XP language was a little clearer; this is the first post regarding this launch that clarified that. Thanks for that Dirk.

qwerty
November 25, 2008 4:30
For a company who has entire OS and all the major apps like IIS, .Net famework and what not, releasing baby installers or patchers, or seperate configurators does not make sense. They all should part of the grand setting up of the machine. It is amzaing that we can keep up with all different components and version compatibilities of what version can run IIS7 and which one runs IIS1.0. There should be click once to setup the entire system...done.

Adnan Khan
November 25, 2008 6:22
This will definitely make setting up a web server a lot quicker and easier than in the past. I just hope everything works well when I try it out in a few weeks when our new server arrives! Thanks for the heads up

StevenMcD
November 25, 2008 10:27
This all looks great but it's a shame that you can't install IIS7 on XP or Server 2003. It's amazing that you will have to upgrade your whole server just to get a new webserver on it. There is for sure 1000 excuses from Microsoft but still. It's like the only product ever that is like that. Wonder if you could not install IE7 on Server 2003 or something ..

I would understand if theu made some extreme architectural change in the OS but Server 2003 -> 2008 is not that big a thing. I don't think the Apache people have to reinstall the whole server just to upgrade Apache ..

Ashic
November 25, 2008 13:26
Well, nice app for beginners, but for hardcore gamers :-) will be much better if asp.net can be enabled on Windows Core.

I know about .NET and gdi, but in most asp.net apps gdi isn't necessary and if powershell can run ...
http://dmitrysotnikov.wordpress.com/2008/05/15/powershell-on-server-core/

Petr
November 25, 2008 13:57
Good to hear web platform installer is supported in XP also. I will try it tonight. Looking forward to the new cool stuff in the web space.

Ponnu
November 25, 2008 16:06
While we're on the subject of web installs, here's a little problem that I would love to get some help with:
Side-by-side installation of Web Applications (install the same web app twice on the same server, using MSI, or something similar)

Now you're asking why we would do such a thing, right?

Well, we are an ISV, and our products are web apps that the customer installs on their intranet (so they own their data, etc).

Sometimes as a result of a merger, acquisition, or just the customer's business structure, they need to have 2 or more instances of our app, each serving a different business entity (just to be clear, this is not a limitation of our technology, it occurs when the customer is not ready or is unwilling to combine data from multiple business entities).

When this happens, they sometimes want to install multiple instances of our web apps on the same web server, each configured to use a different database. Now our web apps are fine with that, but the MSI-based setups that we use to install the web apps don't like it -- on the second install, they want to go into maintenance mode. We don't want to go around changing setup guids on a customer-by-customer basis, so we usually have the customer xcopy the first site, and then manually configure their app pools, config files, etc.

I would love to be able to tell the customer "Sure, just run the setup again, and supply a different Application Name, it'll do the rest." In a beautiful world (at least, I think), each installation would show up as a separate entry in Control Panel | Add/remove programs, so that the customer can manage the installations and program updates individually.

I always thought it was unfortunate that Microsoft ties certain applications to the OS. Other web servers like apache will install on virtually any OS. Perhaps this is just a way for Microsoft to force people to upgrade?

Anyways, this is a step in the right direction I just hope that eventually I can run something other than IIS6 on my home server.

Mike Ceranski
November 26, 2008 0:37
What's the official reason or excuse that IIS7 is not supported on XP? It's a web server for cripes sake. Don't worry Microsoft, we'll let go of XP in a couple years...