XM Radio gets even cheaper 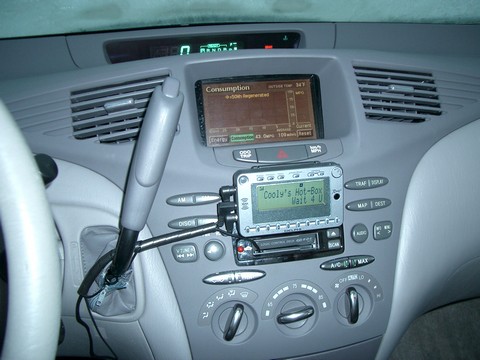 I was checking out the external hard drives, glanced down and noticed an XM Satellite Ratio priced at $14.99. Yes, that's US$14.99. Holy crap. I usually see XM Radios for $99 or so. This one usually goes for $50, but currently has a coupon that gets it to $30. However, for whatever pricing mistake or reason it was $15. I figure soon they'll be free.

As I figure it, just the cables that came with it are worth $15, so I had to gset it. There's other, coolio receivers, but remember, this was an impulse purchase paid for with allowance.

Let me tell you, XM is great. I activated the service which is $12.95 a month but you can pay for the year and save 8% and there's a sliding scale from there. One month is less than the price of a new CD or 13 songs on iTunes. If I drive to Seattle once a month for three hours each way it's paid for itself in my opinion. If you get another one for your spouse it's only $6.99 extra.

The radio also has a nice feature where you can mark a song that's cursrently playing and later if that same song (up to 20 saved songs) is playing on any of the other channels, you'll be notified.

This particular model has a number of ways you can integrate the system with your existing stereo. It's got a built-in FM broadcaster that actually works better than you'd think it would. It can plug in directly if you've got a line-in, it can plug-in with a wired FM modulator, but I chose to use the cassette adapter (see picture above). I think I did a pretty good job of installing it. Note the three cords, antenna, power, and audio all going in-and-out of the receiver and into the tape deck. There's a magnetic external antenna that you put on the roof of the car. I fed it through a number of rubber gaskets and into the driver-side door and under the seat.

If you have a subscription then you automatically get access to the online streams. This is cool because I can listen on the way to work, then keep listening to the same show when I get to my desk.

One thing that sucks is that there's a channel completely dedicated to Frank Sinatra, but they've just dropped Ngoma, the African channel, in order to add a bunch of French Pop to satisfy their contractual obligations to some Canadian deal. Interestingly, Ngoma is still available online. Other than this lack of World music, XM Radio is pretty amazing.

Justin Williams
November 22, 2005 17:16
Isn't the quality of the sound pretty awful? I remember being underwhelmed when renting a car w/XM a few months ago. Channel selection was great, but the music was noticeably compressed. Sounded worse than MP3s. Hopefully it was just a bad radio or something...

Jeff Key
November 22, 2005 20:12
The Roady 2 device is great - but after being on my dash for about a year the control buttons are acting kind of flakey.

Not sure if it is the Florida sun, or just a years worth of use (or both)...but I may try and find this same deal to get a replacement radio.

Bryan Batchelder
November 22, 2005 20:46
Get Sirius. Way better than XM I think. That cracks me up the dude that says "Opie and Anthony" are worth it; if your tastes lean that way, Howard Stern is 10 notches above that.

Sirius 17 "Jam On" makes Sirius worth it to me alone.

Jeff - I totally can't hear compression in the music, but I will listen harder. It sounds like a CD to me.

Scott Hanselman
November 23, 2005 6:34
Why did you think the cassette adapter was the best option?

you going to have a baby anytime?

World Music from all corners of the global village. Travel the world with sounds from Africa, the British Isles, the Caribbean, Central Asia, Central Europe, Brazil and more.