Z Leaving on a Midnight Train

Forgive my singing in this video clip, but this was just too cute not to share. Z turns 4 calendar months old on Wednesday and he's a different guy every day. What a blast we're having. He's jabbering on, finally sleeping through the night and talking to himself to wake us up in the morning. He is absolutely hilarious and we're loving the time we spend with him. I don't know how you folks with kids can concentrate when you are away from them. My wife misses her job and her interaction with adults, but she's said she wouldn't trade this opportunity for the world. 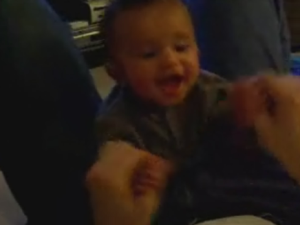 We're a little bittersweet as he's growing up so fast. Every day that goes by is another day that he won't be that age. I mean, he'll only be under a year for, well, a year. That's only 365 days of baby, and really only 6 months of tiny baby. We already miss the little 2-week old Z. I wonder what it'll feel like when he's 15 or 30.

All that said, I'm really looking forward to him walking around and developing opinions. We read to him now, but he's not paying much attention. I'm sure he's a little sponge, but when he starts talking and really interacting it's going to be a freaking blast.

James Curran
March 27, 2006 15:54
Great video. My 2 year old daughter caught me watching it and started cracking up.
It is an amazing thing when they start developing a mind of their own. Amazing... and a bit frustrating ;)

Joshua Flanagan
March 27, 2006 15:58
Regarding story time, it may be too early yet, but when you think of it, I suggest you occaisionally "tell" him a story in place of reading him a story. Then observe as the little one has a completely different experience. Be careful, however, now (and for the last 2 years or so) - my 4.5-year-old insists on a "read story" *and* a "told story" every night. :)

PS She's still not sleeping completely through the night, she's doing the best she can though. 8 hours at a time. From 6PM to 2AM then down until about 5AM.

Scott
March 27, 2006 18:12
Awesome, its so much fun, though gotta warn ya its terrible 3s not 2s. thats when it seems they really come into their own. Scott they may say you'll wish she was little again, but I gotta say I don't Aislinn is a blast and that she can express herself now (4.5yrs) is awesome. She also loves to make up stories and languages and that quite honestly is wild to watch and listen.

Andy
March 27, 2006 23:18
My daughter just hit her 15-month mark and I wish there was a pause button. It is no doubt exciting to watch her learn and grow, but I wish it could last longer.

One thing I discovered is that even when she was very, very little, as in 3-5 months old, and it did not appear that she was paying attention, turns out that she was. She is now correctly able to distinguish between a USB cable from a FireWire cable, and able to tell the difference between IE and Word thanks to the time I spent at my computer talking about what I was doing as I held her in one arm. Stupid stuff...I know...but it's good to learn that her little brain was soaking up this stuff all the time.

BTW, since you are a fellow geek, you may find the "Baby Edutainment System" I created for her of interest -- http://blogs.speerio.net/peerio/2005/07/13/Baby+Edutainment+System.aspx . She isn't allowed to watch any broadcast TV/movies, but she does get to interact with this Media Center hack. She loves it and we have a blast helping her learn new skills.

Nik Kalyani
March 28, 2006 6:53
The great news is that the things that come next are even better than you expect!

They do grow up quickly. Don't worry, you'll be a grandfather before you know it :).