A Better Way for ClickOnce and FireFox 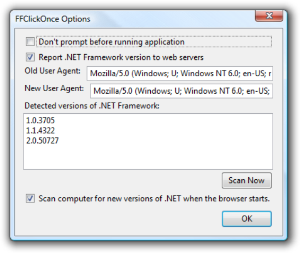 I blogged a few years back about how I was disappointed that ClickOnce didn't work in FireFox, and about a year ago Saurabh (MSFT) wrote a response.

"There have been Plugins written by the FireFox community
[e.g. http://www.softwarepunk.com/cohelper/] where they parse the application after it has been downloaded and read the deploymentProvider Url from it. They then use the undocumented Apis for invoking ClickOnce with the URL as a parameter [rundll32 dfshim.dll,ShOpenVerbApplication URL ]. I have never tried the approach above, but would believe it works.
From the ClickOnce teams perspective we would advise users against parsing the ClickOnce manifest and relying on its format for we could inadvertently break you in future manifest updates. Also since the <deploymentProvider> tag is only needed in Shell Visible installed ClickOnce applications this solution does not work for Online ClickOnce Apps.

For out next release we are looking into what we can do to provide a simple public way for the FireFox community to build plugins for ClickOnce support. Stay tuned ..."

I'm still waiting for direct XBrowser support, but I can report that FFClickOnce (James Dobson's Blog) totally works, with both online and offline apps. It makes ClickOnce work in your FireFox browser. There are a few other small add-ins that were attempts at making ClickOnce work, but James' is the most elegant and best tested, by far.

His documentation is impeccable and includes a testing section. It also scans automatically for .NET CLRs on your system and adds them to your FireFox UserAgent - a brilliant touch. 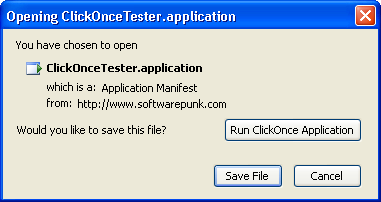 Here's what you see in earlier versions of Firefox: 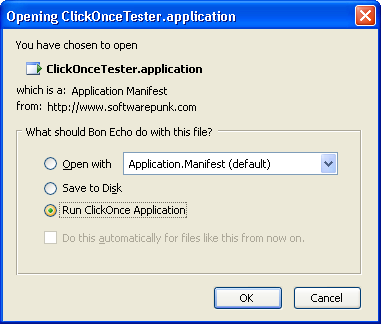 You can also turn this dialog off in the options for the Add-in and just run the ClickOnce apps directly without the interstitial.

I would encourage everyone who loves both FireFox and .NET to go get the FFClickOnce Extension now.

If you're working on a web application that has a ClickOnce component, I recommend that you include this extension as part of your strategy, and change your web page's flow to something like this:

You could also make a new publish.htm page (the static page that is generated when you publish a ClickOnce application, and write Firefox-specific JavaScript to list the installed extensions. This solution seems yucky to me, but would catch the obscure edge-case where the user has FFClickOnce install, but has modified their User-Agent string.

Thanks to James Dobson and Adam Greene for their (direct and indirect) help!

Adam
March 24, 2007 19:01
Hello Scott,
After your post on Click Once and Mozilla (http://www.hanselman.com/blog/ClickOnceAndFireFoxWithACustomSetupEqualsClickThriceAndBeDisappointed.aspx)
I have tried to contact you via email to tell you about that extension.
I have blogged also on http://serviciipeweb.ro/iafblog/2006/05/24/click+Once+Si+Mozilla.aspx( Attention:Romanian language)

I am happy that you discovered the solution - however, can someone speak with Mozilla guys to integrate the solution by default ?

Ignat Andrei
April 04, 2007 1:30
I attempted to use this add-in with report builder and it didn't seem to work. I used the standard http://localhost/reports link and the page came up but when clicking on the report builder button nothing happens. Does report builder do something different?

Royal Hale
April 04, 2007 2:53
After further looking into this. .application was assigned to another application to open it. Remove this and it worked.