A/B Testing and Testing In Production with Azure Web Apps

I've got a lot of production web sites running in Azure right now. Some are for small side projects and some are larger like the sites for the Hanselminutes Podcast and This Developer's Life. I like Web Apps/Sites (which is Platform as a Service) rather than Virtual Machines (Infrastructure as a Service) because I don't like thinking about the underlying operating system if I can avoid it. I like to be able to scale the site up (faster, bigger) or out (more machines in the farm) with a slider bar.

In fact, there's some other more advanced and useful features that Azure Web Apps have that keep me using Web Apps almost exclusively.

I'll use a little site I made called KeysLeft.com that tells you how many keystrokes are left in your hands before you die. Think of it as a productivity awareness tool.

First, I'll add a Deployment Slot to my existing Git-deployed Web App. The source for KeysLeft lives in GitHub here. When I check-in a change it's automatically deployed. But what if I wanted to have a staging branch and automatically deploy to a staging.keysleft.com first? If it works out, then move it to production by swapping sites. That'd be sweet.

You can see here my main KeysLeft web app has a Staging "side car" app that is totally separate but logically related/adjacent to production. Notice the "swap" button in the toolbar. Love it.

This Web App has its configuration copied from the main one, and I can setup Continuous Deployment to pull from a different branch, like "staging" for example. The name of the deployment slot becomes a suffix, so keysleft-staging.azurewebsites.net unless you set up a custom CNAME like staging.keysleft.com. You can have up to 4 deployment slots in addition to production (so dev, test, staging, whatever, production) on Standard Web Apps.

Once I've got a slot or two set up and running a version of my app, I can do A/B testing if I'd like. I can set up a feature that was called "Testing in Production" and is now "Traffic Routing" and tell Azure what percentage of traffic goes to prod and what goes to staging. Of course, you have to be sure to write your application so such that authentication and session is managed however is appropriate, especially if you'd like the user to have a seamless experience.

Here I've got 10% of the traffic going to staging, seamlessly, and the other 90% is going to production. I can make a small change (background color for example) and then hit the main site over and over and see the occasional (10% of course) request being routed to the staging slot. You can configure this static routing however you'd like. 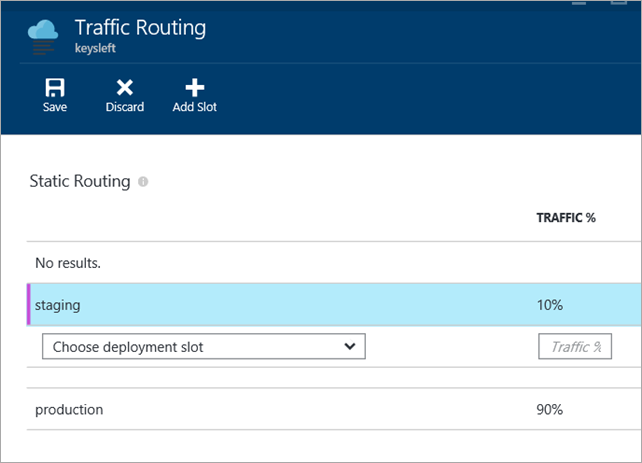 Then I could hook up Application Insights or New Relic or some other event/diagnostics system and measure the difference in user reaction between features that changed.

Made it this far? Then you're in for a treat. Static routing is cool, to be clear, but scripting a more dynamic experience is even more interesting. Galin Iliev, one of the developers of this feature, gave me this Powershell script to show off more powerful stuff.

First, you can use PowerShell to manage this stuff. You can change routing values and ramp up or ramp down. For example, here we start at 10% and change it by 5 every 10 minutes.

But! What if you could write code to actually make the decision to continue or fall back dynamically? You can add a callback URL and a Site Extension called the "TiP Callback Extension."

The Site Extension (and all Site Extensions for that matter) is just a little sidecar Web API. This callback gets a small POST when it's time to make a decision, and you decide what to do based on HTTP-related context that was passed in and then return a ChangeDirectionResult object as JSON. You can adjust traffic dynamically, you can adjust traffic when doing a deployment, do a slow, measured roll out, or back off if you detect issues.

NOTE: The ChangeDescisionCallbackUrl and this code below is totally optional (so don't stress) but it's super powerful. You can just do static routing, you can do basic scripted dynamic traffic routing, or you can have make a decision callback URL. So the choice is yours.

You can check out the code by visiting yoursite.scm.azurewebsites.net after installing the TiP callback site extension and look at the Site Extensions folder. That said, here is the general idea.

Here's the object you return. It's just a class with two ints, but this is super-annotated.

All this stuff is included in Standard Azure Web Apps so if you're using Standard apps (I have 19 websites running in my one Standard plan) then you already have this feature and it's included in the price. Pretty cool.

Georgiy Mogelashvili
July 17, 2015 14:03
Hey Scott, just a quick thought about the ad at the bottom - if it says Download for free now I would expect a bit more than a free trial. But if it keeps this blog going... ;)

All this stuff is included in Standard Azure Web Apps so if you're using Standard apps (I have 19 websites running in my one Standard plan) then you already have this feature and it's included in the price. Pretty cool.

I have 1 site in shared mode in Azure and I pay around 13-15 euro/monthly, can you please share how can you afford 19 sites? Or is it because of your MSDN subscription?

Tim Murphy
July 21, 2015 8:20
Anyone know if it is possible to have people (either on a per browser or ideally per user account basis) opt into the testing instance?

I understand that a cookie is set that determines the routing. Has anyone ever integrated that with an opt-in beta process?