One of the things I'm digging about VS2010 is its extensibility model. I'm collecting add-ins in VS like I collect Add-Ins in FireFox. Here's my current of the best Visual Studio 2010 Extensions I'm using. 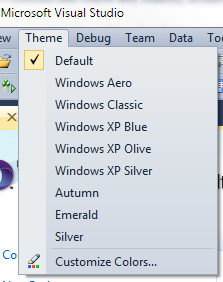 This crazy add-in adds 25 additional commands to Visual Studio! It's a collection of really convenient little improvements like Open Containing Folder and Open Command Prompt. But it's also subtle things like Undo Close that will reopen the most recent tab with the cursor just where it was. There's a lot of Copy/Paste improvements, letting you copy and paste a whole class, or copy and paste references between projects. It even adds "Format Document on Save" that will tidy up your whitespace every time you save your document. Lovely. 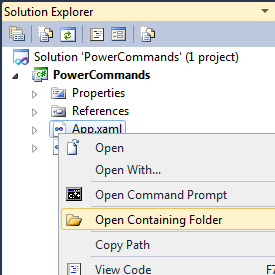 Two of the big changes are the "Document Well" that changes how tabs behave. It'll color tabs based on what project they came from, which is nice for large solutions. It also introduces optional tab recycling that will close old tabs as you open new ones. If you prefer a pile of tabs, you can get multiple rows or columns of tabs.

You can also Highlight Current Line, nice for large monitors. It adds HTML Copy that puts code in the clipboard as in the HTML format if if you like, but most of all, it adds a new Searchable Add Reference Dialog. Magic. I'm a fan of BeyondCompare from Scooter Software, but I like integrated stuff as well. CodeCompare is a free Diff tool that runs inside VS itself. It's nice because it's using the VS editor so it has the features you're used to like Ctrl-Scroll to change the font sizes. I wish the two panes changed sizes in sync though, and I've seen one or two crashes. Still, an excellent free compare tool, and I like that I can drag the second file in. T4 (Text Template Transformation Toolkit) Code Generation is Visual Studio's best kept secret. It's built in and it's yummy. However, there's no syntax highlighting and opening .tt files in Visual Studio directly is a smidge scary, as it's hard to tell what's code generating code and what's the code you're generating. With the free tangibile T4 editor you get coloring and Intellisense. 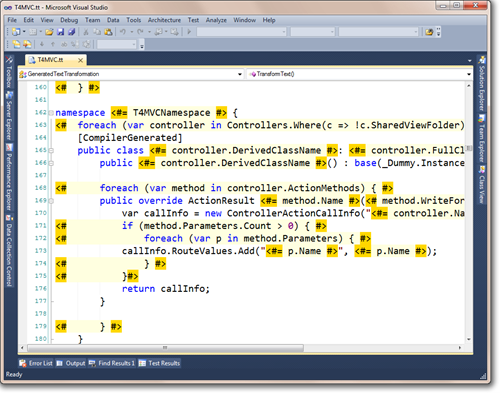 What are your favorites, Dear Reader?

Comment on this post [33]
Share on Twitter or Facebook or use the Permalink
June 09, 2010 11:56
Waldek Mastykarz (SharePoint MVP) has been publishing numerous extensions for SharePoint to extend VS 2010's SharePoint packaging capabilities. Most of them are really excellent for a SharePoint developer and should be part of the toolbox.

https://www.google.com/accounts/o8/id?id=AItOawmPSs4UQEmdNia-qvLypRQgwh5wA5OpZAA
June 09, 2010 11:58
Nice to see that we use the same tools :D

I have also a license of Beyond Compare and I really like it, but thank for the suggestion of integrated compare. I will give it a try!

But they all look good :) Thanks for sharing!

jerryqian
June 09, 2010 13:19
Yesterday I was browsing the Visual Studio Gallery myself. Things that I liked besides the plugins mentioned above are the VS10x tools by Michael Kiss, especially:

I must admit: I did not have a chance to test them myself.

PS: I'm not connected in any way whatsoever to Michael Kiss or AxTools.

If MS folks don't feel it is good enough, do you think others will?

How soon before it is axed?

BTW: I prefer the Expression look of Visual Studio.

SM
June 09, 2010 17:55
I'm surprised you didn't mention PEX! Pex is one of the most useful things I've used in a while. Really helps tighten up my defensive coding.

There does not exist a T4 editor that doesn't utterly suck. Please vote this feedback item up: https://connect.microsoft.com/VisualStudio/feedback/details/565760/please-take-pity-on-us-give-us-a-decent-t4-editor

For Add Reference, I prefer the traditional classic dialog with Search enabled: http://visualstudiogallery.msdn.microsoft.com/en-us/02c0bded-4739-40ec-af07-9eb002a27246

http://utkarshpuranik.wordpress.com/
June 09, 2010 19:53
I like power command, but it just makes my editor flicker while i select something in the editor when working on c++ project.

benny
June 09, 2010 20:15
This isn't exactly a Visual Studio extension, but it's worth mentioning in the context of this conversation. I just recently released cc2vs in order to proxy the numerous JavaScript errors and warnings that Google's excellent Closure Compiler can detect into Visual Studio at build time.

I'm obviously incredibly biased, but I think cc2vs is a must-have if you write lots of JavaScript in Visual Studio. I mean, who wouldn't want to catch compile-time errors in their code?

https://www.google.com/accounts/o8/id?id=AItOawk7ZHn39QytzFHTSL359Cvc6L9FQg02VuE
June 09, 2010 23:33
BeyondCompare is easy to integrate into Visual Studio and TFS.

2. In the Configure Tool dialog:
In the "Command" text box enter the path to BC2.exe. On a 64bit default install this should be C:\Program Files (x86)\Beyond Compare 2\BC2.exe

Scott Hanselman
June 10, 2010 1:01
Thanks for the tools. A friend turned me on to PowerCommands a few months ago and it has come in really handy. I look forward to trying out the pro version. Ironically, I posted my favorite list of .NET dev tools this week on my blog and included PowerCommands as well. Its a list of tools I have collected over the past year of coding. I had no idea how many tools I use...

kim
June 11, 2010 23:47
Source Code Outliner PowerToy
It was released for VS2010 but didn't work and is now unavailable.
Coding without it is not an option.

https://www.google.com/accounts/o8/id?id=AItOawkrfhUbSHh1nPL28fTYh-InbVYSjeOy9S8
September 04, 2010 5:36
I think it's time for a new version of this article now that some time has been given for more extensions to develop.

I'm going to have to shamelessly promote my 2 extensions. But I do think they are absolutely awesome and use them more than any other ones...

http://tinyurl.com/alignby - Noah Richards wrote a similar extension which is distributed with the Productivity Power Tools, but mine is like that, but on steroids. I've written a big description on the extension page.

http://tinyurl.com/solexp - Allows for easy maintenance of the solution explorer. It allows you to collapse everything except your current document. And it allows for a less coupled track active item - it doesn't track it automatically but hit 1 button and it selects it.