First, let me remind you that in my new ongoing quest to read source code to be a better developer, Dear Reader, I present to you thirty-fourth in a infinite number of posts of "The Weekly Source Code."

F#, everyone is agog over F# and getting all functional. Again. ;) The F# September 2008 CTP came out a few weeks back and folks I'm talking to are digging it. Here's the goal:

"F# developed as a research programming language to provide the much sought-after combination of type safety, succinctness, performance, expressivity and scripting, with all the advantages of running on a high-quality, well-supported modern runtime system."

Looks like it's more than a research language as it's inside Visual Studio and looking pretty with syntax highlighting and intellisense and everything. This might be old news to you, Dear Reader, but F# is reaching a very significant level of polish. This release is moving F# to the level of being a peer of C# and VB. It's got its own F# DevCenter at MSDN. How's that for legit?

Here's a great one paragraph explanation from Vertigo's Rick Taylor about what/why/how F#:

"Unless you specify otherwise, everything in F# is immutable, much like the string construct in C#. This extends to areas that you might not expect. For instance, once you set an int to some specific value, that's it – you can't change it, unless you have marked it as mutable. The reason for this is because the language is primarily a functional one. Programs in functional languages contain functions which return values, which are then further used, etc – but each value or set of values is its own entity, and to change it while within a function is to produce a side effect, something undesirable in a functional language. In the strictest sense, functions return values but do not alter their parameters, or the outside world (which, incidentally, gives rise to the monad pattern mentioned earlier). F# follows these rules of functional programming, but also allows you to break those rules with the mutable keyword."

However, as a F# newbie with a few years of Haskell in the back of my head, the presentation that has clicked with me the most was Leon's F# eye for the C# guy PowerPoint. Scandalous, I know, as you may know Leon as the cruel bully who called me Hanselgirl in public recently at TechEd Australia. I promptly boxed his ears (it was more of a slap-fight actually) and there was also a public arm-wrestling. Between the two of us I'm sure there was the potential to splice together one normal-sized male arm, but I digress. You can download his deck here, but I've also taken the liberty to put it on SlideShare and embedded it here.

F# Eye for the C# Guy
View SlideShare presentation or Upload your own. (tags: f# c#)

I had intellectualized slides 42 through 45, but the way he described it clicked. He did what I would do:

"I worked this out using Reflector. I did not work this out from reading books or papers or listening to podcasts or quizzing intelligent people. A simple let statement is a static function, under the hood. When you see let, think function."

Check out those few slides,. It's a great deck, and I'm sure Leon wouldn't mind YOU, Dear Reader, showing his talk at your local User Group or having a Programmer's Lunch at work and taking complete credit for it. That's what I fully plan on doing. ;) Suck it Bambrick!*

Remember there are no variables. No side-effects.

Units of Measure in F#. What? Andrew Kennedy's PhD thesis from 13 years ago just happens to be a feature in F#. He's done a three part series:

Basically they've added static checking and inferences for units-of-measure. Not any specific ones, but the concept itself.

"As far as F# is concerned, ft and m have nothing to do with each other. It's up to you, the programmer, to define appropriate conversion factors."

Here's a screenshot from his blog that says a thousand words and showcases the FSharp.Math.PhysicalConstants namespace, along with the International System of Units (SI) namespace.

"You can define mutually recursive measures using "and" to connect them and placing the Measure attribute immediately before the name of the measure:"

A fun little 2D Tron-Clone game from last year, written in only 182 lines of F# by Phil Trelford. You can download it from hubFS and read how he wrote it on the Applied Games Group Blog. The game even supports Xbox 360 controllers! Sweet. 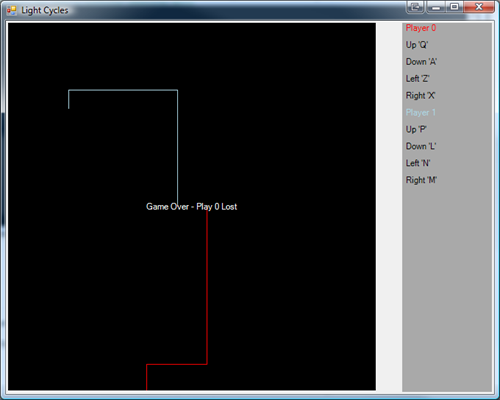 Here's all 182 lines, not counting the first 4 lines of comments.

Try to learn ONE new language each year!

* Oh, relax, Dear Reader. Leon and I are, like, totally, BFF. We're peas and carrots. Truly. The bastard.

Comment on this post [14]
Share on Twitter or Facebook or use the Permalink
September 25, 2008 16:57
This is my first time looking at some F# code and trying to understand it, and the 3rd "something basic" example made me scratch my head at first.
The first line is straightforward. We're defining a function named "add" which takes two parameters, x and y; the function's behavior is to return the sum of the two parameters (x + y). (Sorry if my terminology is off here; I'm coming from a C# perspective trying to understand this.)

The second line is what threw me for a minute. We're defining a function named "a1" which takes zero parameters; the function's behavior is to call the add function and pass it argument 3 and ... wait a minute, that's all it says. That's not enough parameters -- the "add" function takes two params, not one!

Continuing on, the third line defines a function named "a2" which takes zero parameters; the function's behavior is to call function "a1" and pass it one argument, 4. This time, there are too many parameters: a1 takes zero params!

I had to think about this for a minute. What seems to be going on is when a2 is called (from the print_int statement), the "extra" argument, 4, gets "tacked on" to the end of the call to a1; and then when a1 calls the add function, that argument 4 is passed along as an argument to the add function, along with the 3 that's a part of the definition of a1. The end result is that add gets called with arguments 3 and 4, and the result of the snippet is that 7 gets printed.

Assuming my understanding of the code as described above is correct (it might not be -- I haven't actually tried running it yet to find out!), the definitions of a1 and a2 (where another function is called with the "wrong" number of parameters) seem weird to me. The definitions of a1 and a2 seem almost more analogous to C macros than to C# methods.

I'm wondering at this point if doing this type of thing is pretty much standard practice in an F# program, that wouldn't require comments to be included with the code to help explain to readers what the code is doing? It seems like if the definitions of add, a1, and a2 weren't all adjacent to one another in the code, it might not be straightforward for someone reading the code to figure out what was going on. (I understand that the code snippet is just a contrived example, not "real" code; but at the same time, it is simple enough that it seems like the meaning should be straightforward, even out of context.)

What troubles you about it is actually one of the most important concepts of functional languages, which is currying.
http://en.wikipedia.org/wiki/Currying

The idea is having high order functions (such as fold, map or filter) and create other functions by instantiating some of the parameters of those functions. This is possible only through currying.

Santiago Palladino
September 25, 2008 18:23
@Jon - that's called 'Partial Function Application'. This page contains a very brief explanation of what's going on (I know it's for Haskell, not F#, but it's near enough).

The point of confusion is what the line 'let a1 = add 3' means. It actually defines a function a1 that takes *one* argument. In effect, you're defining a1 as 'let a1 y = add 3 y'. You may ask 'why not just include the explicit argument? In that case, yes, but there are times when you want to use a partially applied function but not necessarily define it.

For example, say you have a list of integers and you want to add 3 to each element of the list - you can do this:

Then of course, you can write a function to add some value 'n' to all elements of a list:


Both definitions of are equivalent. In the second case, the F# compiler uses type inferrence to work out that there's a missing parameter.

Thanks, guys! Both of your explanations were helpful. I'm starting to get it.

(I think I've been spending too much time on stackoverflow.com lately; I had an odd compulsion to give both of your posts a "+1".) :-)

Jon Schneider
September 25, 2008 18:58
I think some better naming could have really helped that code fragment:

Newtie
September 26, 2008 0:37
Jon Harrop's book is awesome! Not just for the ninjas :) He does a good job explaining to the nongenius as well.

Robert Pickering's comment about naming is something I feel will be a big issue is the near future. We have people naming identifiers x and y after years of telling oo devs to use self documenting code. I'd like to see some more focus there. In fp, identifiers can often be used in many ways, and devs don't want to add limits by giving strict names. In .NET, give descriptive names so ninjas can get back to their cool jobs and stop deciphering our code.

Amanda Laucher
September 26, 2008 2:26
If F# will be part of the next Visual Studio and there will a Visual F# Express I think Microsoft will be known for bringing functional programming to the masses.

But would F# be a good language for web developers?

Michael
September 26, 2008 5:32
I only quasi get F# and functional languages - been VB and C# forever now and it really interests me. I think something that would help me 'get it' a lot more is to see a 'data' application written in F#. Do you have an example of Windows or Web application that is traversing state and pulling data from a database and updating data/objects based upon user input and reloading it later...see that's were I 'don't get it it' - how do you handle 'data' and 'state' in a stateless, immutable, programming language? How do you handle events (outside input)? What about threads where your loading up a bunch of data in the background but doing something else in the foreground?

These examples are all very basic (and I know intentionally so), but if it's not an ideal fit for line of business applications then I don't want to put an inordinate amount of time in learning it.

Maybe not Newtie, but F# does treat Linux and other operating systems as absolute first class citizens. Everything is tested on mono and more. Pretty classy stuff.

is similar to C# code that says...

static class LittleClass {
//a static copy of the parameters that were supplied...
private static int MyState = 3;

obviously, the F# version is much simpler.

Doug
September 26, 2008 19:57
Great post! As a C# programmer this is very helpful to understand some of the f# concepts, I'll try to check all the links you put on this post.

PD: I wanna see more fight between Leon and you !!