This time last year we did a Microsoft Virtual Academy class on what was then called "ASP.NET 5." It made sense to call it 5 since 5 > 4.6, right? But since then ASP.NET 5 has become .NET Core 1.0 and ASP.NET Core 1.0. It's 1.0 because it's smaller, newer, and different. As the .NET "full" framework marches on, on Windows, .NET Core is cross-platform and for the cloud.

Command line concepts like dnx, dnu, and dnvm have been unified into a single "dotnet" driver. You can download .NET Core at http://dot.net and along with http://code.visualstudio.com you can get a web site up and running in 10 minutes on Windows, Mac, or many flavors of Linux.

So, we've decided to update and refresh our Microsoft Virtual Academy. In fact, we've done three days of training. Introduction, Intermediate, and Cross-Platform and all three days are now available! We just released training for ASP.NET Core 1.0 Cross-Platform that shows Mac, Ubuntu, and Docker!

Head over to Microsoft Virtual Academy and watch our new, free "Introduction to ASP.NET Core 1.0." It's a great relaxed pace if you've been out of the game for a bit, or you're a seasoned .NET "Full" developer who has avoided learning .NET Core thus far. If you don't know the C# language yet, check out our online C# tutorial first, then watch the video.

Join experts Scott Hanselman and Maria Naggaga, and find out how to build .NET Core applications on any operating system. Bring your web development expertise and roll up your sleeves, for this first in a three-part series. 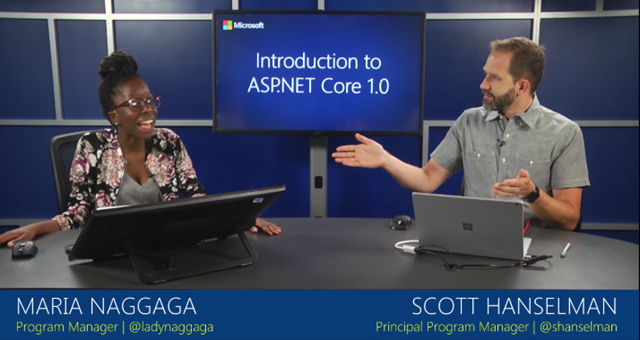 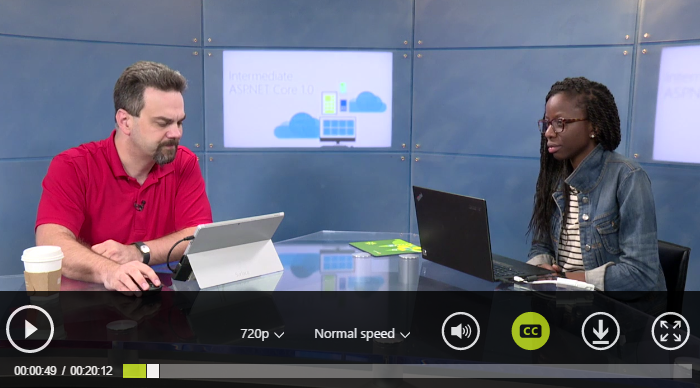 Do us a favor when you watch these, rate them (5 stars!) and SHARE them on your social networks.

NOTE: There's a LOT of quality free courseware for learning .NET Core and ASP.NET Core. We've put the best at http://asp.net/free-courses and I encourage you to check them out!

Hope you have as much fun with these courses as we had creating them!

Jalpesh Vadgama
January 18, 2017 15:17
I've been following along and straight away you have a .json project file here, but with my downloaded dotnet core I get a .csproj project file - and that makes it impossible to follow along!

It looks like these were recorded in October 2016, before the decision to move from .json to .csproj was finalised? Since I can't get autocomplete of dependencies in the csproj form of the file everything is much harder.

So to make these genuinely useful, would you consider including in the 'resources' tab an extra document or something to help interested people actually follow along in the csproj world?

Without that, I think these videos are going to lead to more frustration than inspiration.

Scott Hanselman
January 19, 2017 0:29
I can't wait to be able to build C# ASP.NET Core websites that can run on a Raspberry Pi running Windows 10 IoT. Unfortunately, while this was possible in the .NET Core beta, it's currently not possible at the moment, but I do understand this will be addressed in the future. (Sure, I could use Node.js, or switch over to Linux, but I'd rather use ASP.NET Core on Win10 IoT.)

When this is possible again, I think this would be great material for a "how to" post.

Amit Agarwal
January 22, 2017 23:42
Unfortunately only the first video was on vs code. I am working on linux so visual studio is not working on my system. Since you are editing al kinds of things in the solution and use a lot of automated referencing, I am not able to follow your course.

Which is a shame, because it looks great.

1. Nuget is driving me crazy! VS2015 will respect the global location for nuget if It's legacy .Net, but NOT for .Net Core, it wants to put it elsewhere... That's bad, but what's worse is that the command line has another nuget cache, and they eat up way too much disk space on my surface! WHY so convoluted?

2. Isn't .Net Standard 2.0 due out soon? I guess most things are close, but reflection should be a lot easier. Not questioning the value of these classes, but the timing may be a tad off... just saying.

Fallon
February 06, 2017 12:51
I'll definitely check this out, got a lot of positive response about Scott

Tudor
February 07, 2017 9:00
Hello! Excellent and decent post. I found this much informative, as to what I was exactly searching for. Thanks for such post and please keep on sharing with us.... Showbox for PC. The website looks great. The article is written so professionally that no even words. Showbox for PC