While reading source today, I saw some code in the wild today that looked roughly like this (not the actual code):

You get the idea. This isn't that uncommon, I've seen it more of than not. The person who is writing it usually knows it's bad 50% of the time, but it's always a trade-off between figuring out the right search query (a tough one, in this case!) and knowing what to look for in MSDN.

This brings up one of my favorite classes in the BCL, the TypeDescriptor class. A method like this:

...would allow all that switch/if/else to go away replaced by:

You'd probably want to expand the method with checks to see if T was in fact, System.Type, or System.String, but you get the idea. 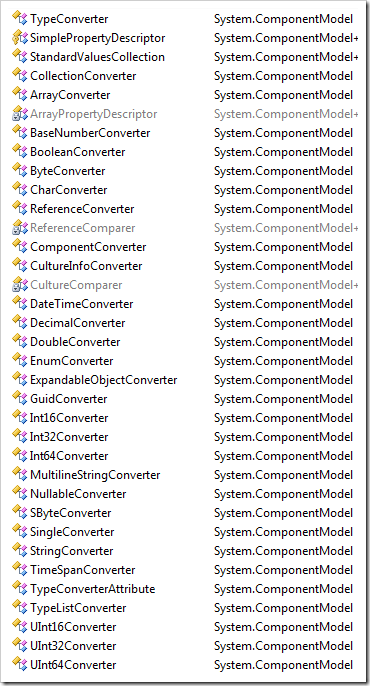 There are lots of standard converters like EnumConvertor, ColorConvertor, and more, all waiting for you in System.ComponentModel as seen in the image at right.

Not only that, but you can make your own TypeConverters and spread the love. They are used extensively when displaying types in Property Grids, in WinForms, or in XAML. You can also use them in PowerShell as a better way to present your objects as strings when "casting" in PowerShell.

Jesse Liberty has a fine example showing how to use Type Convertors in Silverlight to enable you to put complex types in XAML attributes.

That's it, and when that Type was decorated with an attribute like:

Then that new TypeConverter would be picked up and used by the line of code I showed before. Much better than a switch or pile of if/elses, I think.

Dragan Panjkov
May 10, 2008 17:47
You can actually just use Convert.ChangeType("false", typeof(bool)); to convert a string to a bool. No custom type converter necessary.

Eric Hauser
May 10, 2008 18:34
We use type convertors extensively in our config classes to ensure that the pesky strings in the config files will be converted to the actual types like Regex or Color, when they enter the process. Much cleaner for me, that playing with X(tra)ML

Rajiv Das
May 10, 2008 23:07
Here's some more useful information about the most accurate way to use typeconverters (prettymuch what you said here plus one thing)
http://jfoscoding.blogspot.com/2007/11/easy-mistake-using-typeconverter.html

Dragan - Thanks! My source code formatter is wonky for generics. I'll fix it tonight.

Scott
May 12, 2008 8:21
that was a cool and hard article but it worths reading and more.
thank you .it saved me a lot of time and increased my knowledges.

Mojtaba Vali
May 12, 2008 8:56
I have to admit that I don't really care for TypeConverters, though my experience with them has been with trying to do some fairly complicated things within Visual Studio to get my components to work the way I want them in the designer. I think they could have designed the type converters a little differently and perhaps separated out some of the other work the TypeConverters also do (such as getting a list of valid values).

This blog post motivated me into creating a blog post of my own. My article discusses three different methods of converting values (IConvertible, TypeConverters, and conversion methods) as well as provides a sample project that includes source code that is similar to System.Convert.ChangeType but can also handle TypeConverters and conversion methods. Here is the link to the article if you are interested - Type Conversions.

6. Override the IsValid method that performs validation. This method is overloaded.

Only too bad that most BCL TypeConverters don't do this correctly, for example, the GuidConverter's IsValid() will return true upon an empty string, or any invalid Guid string, but the GuidConverter.ConvertFromString() will throw a FormatException. See http://connect.microsoft.com/VisualStudio/feedback/ViewFeedback.aspx?FeedbackID=96296. Otherwise very useful article!

WouterDemuynck
May 12, 2008 18:22
Thanks for brings this to attention, Scott! Coincidentally, it applied to something I was immediately work on and helped make my code more elegant and robust.

Derek
May 14, 2008 23:46
Unfortunately, converters are badly broken.
For example IsValid always returns true, DecimalConverter.FromString does not accept valid strings. See
https://connect.microsoft.com/VisualStudio/feedback/ViewFeedback.aspx?FeedbackID=329119
etc...
So, code similar to above is ugly, but necessary, workaround for a sloppy and buggy converters in .Net framework.

Sebastien
May 20, 2008 23:33
Besides TypeConverter being slow and broken for some types, it also do not handle things such as trimming, DateTimeStyles, NumberStyles, default values, etc.

This is a good example of why having too many choices can be really bad. In the conversion case, There are a dozen way to convert stuff, but none of them "just work" (tm), we still need to roll our own.