I'm afraid I'm a utilitarian gift giver. I can't imagine not being this way. I basically look at a person's life-workflow and I look for ways to make some tiny thing slightly easier. Like a teacup with your name on it if yours keeps getting pinched at work, or a key-shaped USB key to fit better with a bunch of unruly keys.

My wife LOVES to take pictures of the boys. But she HATES to upload them to the computer or server. She'll fill 16 gigs of photos and then come find me, "can you put these on the server."

I've tried putting software like Live Photo Gallery on her machine and adding an SD Card slot. Seriously, just put the card in and it'll automatically upload the photos. But, it doesn't fit into her life's workflow. It's not intuitive.

What is intuitive, however, is just bringing the camera home and putting it back on the shelf. And that's her workflow now.

I bought her a 4 gig "Eye-Fi Wi-Fi SD Card." Seriously, this thing is bananas. It's an SD memory card, looks, acts, works, IS an SD card. But, it has freakin' Wi-Fi built in. It'll work with basically any camera.

I'm all about miniature. Micro-SD is amazing. 2 gigs and you can accidentally swallow it. But, I'm amazed that this little card can effectively leach enough power from the host camera to run a tiny Wi-Fi client. 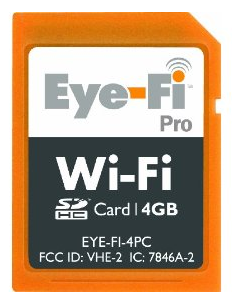 Here's what you do.

Boom, that's it. Now, whenever you take photos, your camera will automatically upload them to your computer when it's near your Wi-Fi. It's a dream.

(Here's the cheesy part of the review)

But what, seriously, that's not all. It'll also do "relayed" uploads, so you can upload to an intermediate website of theirs for temporary storage, and when your computer is on later, it'll download the photos. 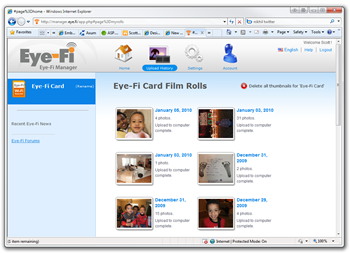 Another nice feature is that it'll automatically upload if it sees a known public hotspot like a hotel or McDonald's, or WayPort. Still, not a reason to eat at McDonald's, but a reason to get a soda through the drive through. ;)

The final cool feature is the Eye-Fi Geo (or you can upgrade your existing card) will automatically geo-tag your photos (if you like) by looking at a database of known Wi-Fi access points around you. Awesome for trips to big cities.

I seriously don't have a bad thing to say about this card. The wife is thrilled and the WAF (Wife Acceptance Factor) remains high. I'm not a pro photographer, by any means, but this card works great in my Nikon D40 and my new FujiFilm point and shoot. Some pro folks on the Amazon Reviews have said they've had trouble shooting really really fast or that they've had problems with the speed of upload, but I just haven't. Be aware though and read the reviews to make your own decision.

Comment on this post [30]
Share on Twitter or Facebook or use the Permalink
January 06, 2010 10:46
I think this is an awesome idea - be interested to see how well it plays with OS X.. I was watching this from afar for a while, but never really made the leap to try it out.

I wonder how well the 'geotagging' based on nearby wireless would work in Australia... may have to fork out some coin :)

Broc
January 06, 2010 11:04
Google right now has a deal where if you purchase 200gig of online space (it's for a year) you get a 4gig Eye-Fi card for free. Might do that although I don't plan on using the Picasa account for uploading. http://is.gd/5NFdw

https://www.google.com/accounts/o8/id?id=AItOawnRsz5AS1yEzHeqfhbT4DoznhIZL6VvC5o
January 06, 2010 12:16
Eye-Fi just released a new version of their card, that is suppose to cope with some of the problems other people mentioned (just incase you want something that's even never Scott)
New Eye-Fi Pro X2

https://www.google.com/accounts/o8/id?id=AItOawljtbtwH4HdRpi7Ya8u1CheSWPNgdooxvs
January 06, 2010 13:57
I love the concept and can think of several relatives this would be absolutely perfect for.

One question though: at what point do photos get deleted from the card? Is there an easy way for novice users to know when a photo has been uploaded safely, short of actually going to the home server and checking it's in the media library?

Eddy Carroll
January 06, 2010 15:58
I bought one of these little wonders when I was in the US last summer. Absolutely amazing! Walking around NYC it would just sit in my camera in my pocket and "stream" my photo documentation directly to Picasa and to my PC sitting at the hotel. Oh, and it would also Tweet every time it had finished uploading, thus letting friends and family know when to look. I love this product and must find a way to buy the new version and get it sent to me so I can use it in my new EOS 450D in RAW mode :-)

I just wish they would sell the card over here in Europe as well as make deals with other hotspot operators than just WayPoint. Someday perhaps :-)

Graffen
January 06, 2010 18:15
Sadly the main camera in my house is a Sony Cybershot, which uses MemoryStick, not SD(HC). I have to stop buying Sony products.

Howie
January 06, 2010 20:00
I got one of these for Christmas and I must say I love it. The GeoTagging is particularly cool and I also use the selective upload feature to upload images that I protect on the camera to Flickr. Highly recommended.

James Clarke
January 06, 2010 20:24
Are there any security concerns around this technology? Is there a risk of getting some bug into camera's firmware from a regional ISP? Or possibility of planting a bug into the system from the card?

https://www.google.com/accounts/o8/id?id=AItOawmbDfmYs0WqzihALpNgo11aAjCKUStw8Q0
January 06, 2010 22:07
Howie - I know. I was commenting on the miracle of miniaturization. Sorry if it wasn't clear.

Eddy - You can log into their website and see the photos that have been uploaded. The newest Eye-Fi will do a "Transaction" and delete successfully uploaded photos with their "unlimited memory" technique. I just format the card every week or so.

Scott Hanselman
January 06, 2010 23:48
Just got off phone with Eye-Fi support. Turns out my Kodak Zi6 (Video) is not compatible either. Looks like Kodak did not meet the spec that allows the device to power the card's WiFi. Yuck!

I asked the support person to speak as candidly as possible. He noted that rumor has it that Sony is going to start phasing out MemoryStick and produce "point and shoot" cameras that support SD(HC). I found nothing that supports this claim online, however.

https://me.yahoo.com/wildfiction
January 07, 2010 0:16
Been meaning to try out one of these for a while now. Actually, what I'd be most interested in is somewhat of an opposite - a digital picture frame that you can send photos to, and allow other family members to send pics to as well. That would be a great product to give to someone who isn't tech inclined, just set it up in their living room and they automatically get whatever pics you send. Wonder if there might be some way to hack an Eye-Fi for that?

https://www.google.com/accounts/o8/id?id=AItOawkSHEufpZA16qPrNwaYDS6j9q7ZfoDKc8k
January 07, 2010 4:58
I know a few photographer friends that like the idea but 4gig is a bit limiting to them when using SLR cameras with say 15 megapixel photos especially if taking in raw format as oppose to jpeg which they tend to like to do atleast before post processing. Getting wifi built into new cameras is more appealing to me.

I used my Eye-fi card to upload my photos to flickr while on vacation over open wi-fi networks. Thanks to that I didn't loose all my photos when I lost my camera.

Lance Fisher
January 07, 2010 5:07
Oh yeah, another cool thing with the X2 is ad hoc transfers. With this you can use WMWifiRouter on your windows mobile phone, connect to it with the eye-fi, and upload anywhere you have a data connection. Other editions don't work over peer to peer wifi.

You should try to put the Eye-Fi manager app on your WHS box. I added the eye-fi.exe as a scheduled task to start up when during server bootup. So no active remote desktop session is required. The photos are copied to a directory on the WHS box which is shared and then also uploaded to picasa web. My next step is to add the eye-fi.exe as a service using the win2003 resource kit utility.

https://www.google.com/accounts/o8/id?id=AItOawnaIoeLblrIzqSR73rMG3lmcHZZqi_296I
January 10, 2010 1:13
Like someone above, I am very interested to know if you can send pictures from a WIFI network TO a Eye-Fi card. Has anyone out there tried it and does it work either on the Eye-Fi or Lexar Shoot-n-sync? Let me know, please!

https://me.yahoo.com/a/J7SqlWV9oZONDbm_xgVgekomTV4d0g--
January 11, 2010 3:10
@Bryan: It looks like your contact was correct about Sony starting to support SD:
http://abcnews.go.com/Technology/wireStory?id=9498490\

http://gatesvp.blogspot.com/
January 12, 2010 4:43
I wonder if you could use this card in reverse. Plug the card into a digital picture frame and now you've just made it wireless. I know you can get wireless frames already, but this would be a cheap way of wi-fi enabling frames you already have. Cool product!

Stefan Moser
January 20, 2010 1:17
The concept sounds great and would suit my "workflow" perfectly. But as I'm not glad with battery life right now I'm reluctant to give it a try. What are your experiences with the power consumption of this card?

Scott Hanselman
August 16, 2010 23:17
Still dont see the point in these tbh, Camera's will skip them out, or at least should in the next few generations

Sigorny
September 27, 2010 9:22
Just FYI for the security conscious consumer: as long as the eye-fi card is energized, specifically the wifi transceiver circuitry block, the memory array block is susceptible to both wireless read and write operations by say an offending device situated within the effective range (that vare as a function of the host power supply (ie camera battery). While WPA2 security is effective in a wifi transport CONNECTION, it does nothing to protect, encrypt or secure data stored the card's memory block from unauthorized read/write access. Similar to rfid, a vulnerable card is as easily "hacked" as the availability of a cheap wifi "snoop" device had for under 100 bucks. A truly secure wifi, bluetooth or other near field technology/solution does not yet exist. Of course this only matters to those who care about the security and/or integrity of their data. Frankly it kind of gives me a chill thinking about data able to hive itself off or be harvested to heaven knows where. Or to have unauthorized info written to my device. Just good to be FULLY informed.