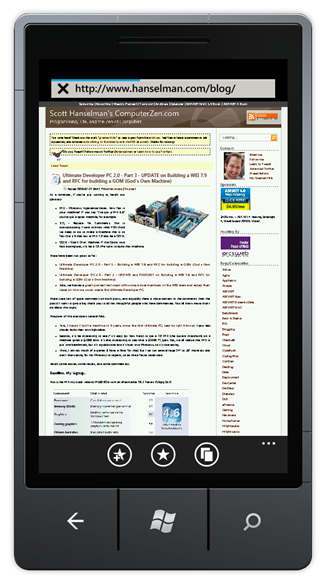 Disclaimer: I work for Microsoft in MSDN. I don't work for or with the Windows Phone 7 team in any capacity. I do know one guy over there, though. That said, I personally have an iPhone 3G (dead, the kids play Monkey Island on it), a iPhone 3GS (the wife won't use it, it's on a shelf) and an iPhone 4 (my non-work phone). I also have a work Samsung Blackjack (WinMo 6.5). I signed up and paid for a Windows Phone 7 developer account and I have ideas for 3 apps. No one has asked me to blog about the phone, my opinions are my own. Also, this is a developer prototype with whatever build they shipped it with.

A Windows Phone 7 developer phone showed up in the mail today. Inside the battery door it said "MS Asset" so it looks like I won't be able to keep it. Still, it's cool. I pulled the MicroSIM out of my iPhone 4 and shoved it, ungracefully, into the normal-sized SIM slot and while it's not kosher, it totally works. I'll go get an converter/adapter at some point.

Here's some things I was impressed with:

Some things I had trouble with:

It'll take a while to get used to "it just works" from Microsoft. All in all, I'm pleasantly surprised as everything has just worked.

The wife thought it was cool too, although she wants a hardware keyboard that flips out. Apparently Dell is making one like that. I keep forgetting that the software and the hardware are separate. I am looking forward to seeing what HTC does with this. Those guys are nuts.

I took a few moments and filmed some guerilla video of me exploring the phone. Again, this is just the build that was mailed to me today, not the final stuff.

In my spare time, I'm going to be working on BabySmash for WP7, as well as a Diabetes application and maybe a few others. You can get the free developer tools at http://developer.windowsphone.com and sign up to sell your apps as well. I'm optimistic. This is quite a bit cooler than I expected. Looking forward to what's next.

Do you know if the TellMe API will be available to developers to use text/speech in our apps?

chrissie1
July 29, 2010 10:01
Touchality have a WP7 FourSquare app already in the works - you'd have to build or apply to your phone using the XAP deploy stuff. Building might be a better go, since apparently sideloading doesn't work.

You won't be able to 'mount' the phone as a drive, apparently, so PTP/MTP are you only options.

https://www.google.com/accounts/o8/id?id=AItOawlV_CKdPJBh3IegKt0-fa7saWfwjqX7Cg4
July 29, 2010 10:09
Hi Scott - assuming the underlying hardware was identical - and that you were paying for it all with your own money - would you rather your main phone run iOS, android or WP7? Cheers, Chris

From what I heard on Paul Thurotts podcast you can only interact with Photos on the Phone via Zune software no plug and play with Explorer etc which really sucks but then again iTunes is the crappest software on the planet.


Do the dev tools ship with an emulator for us poor bastards without the hardware? Guessing it does but just been too lazy to download/install.

praetoriandave
July 29, 2010 10:21
Also check out the foursquare app on codeplex and play with the source :)

I am still firm in my thinking it lacks depth and ambition.. i am just not convinced this is the best foot forward here.. The typography seems busy and i think it adds too much extraneous cognitive load on the user.

I'd be interested to see you do a follow-up video after a week of heavy usage? how it holds up in terms of day to to day usage (not so much app market place missing elements etc, more along the lines of usability as i think this is what the PR post its release will likely settle on...)
-
Scott "MossyBlog / aka Lunatic" Barnes

thanks for the video. I am about to shared it on my site.

BTW I have a question if you dont mind . Does the tile for the webpage ( New York Times in your video )on the home screen update itself, say if the content on the NYT webpage change does the tile on WP7 change ?

Sachin
July 29, 2010 11:48
I think the FaceBook integration is going to be useless for 99% of people until they allow you to filter it - I don't know anyone that actually only has their real day to day contacts/friends as friends on FaceBook, and having several hundred people added to my people directory isn't going to be helpful.

Hopefully they have a lot of people in their ear about that one and it will get sorted before release.. hopefully.

Dan Atkinson
July 29, 2010 12:13
I really hope WP7 takes off. As a mobile developer for the last two years I can say the dev tools for all the other platforms leave me wanting.

C#/Silverlight/Visual Studio is a real sweet spot for me. I'm jealous of all the MS employees. :)

cause only residents of ~30 countries can do that. And this sucks.

Too bad that they don't support native development though. I really like Firefox...

https://www.google.com/accounts/o8/id?id=AItOawmDKaUULcsOv4_RUvKbAaz9D11AAbVhpf0
July 29, 2010 13:12
Thank you Scott.
No word on the outlook app though. you only say different aspects could sync and download. mebbe more screenshots
and a podcast next time? also, this is the quickest turn around time i have ever seen for a post (a good well worded one). you inspire us all.

The other thing is the emulator! It seems like I need a super computer to run the emulator and even then it is extremely slow! I have a two year old machine and still the emulator does not work. I would not BUY a new COMPUTER just to develop applications for Windows Phone 7.

azamsharp
July 29, 2010 16:25
One thing that disappointed me immediately is that the browser does not support the geolocation object that the Webkit and Mozilla browsers do. I think that's a huge failure for Web apps targeted to phone browsers. I'd love to ask someone over there to force that in.

Jeff Putz
July 29, 2010 16:36
Hello! I have a question that hopefully you can answer. Will signing up for the application store get me a dev phone? I have a few things going on the emulator, along with a few ideas for apps. But I would like to see and feel the actual phone and see the apps actually running on the phone the way I imagine.
Thanks!
Rudy

Sam Rizzo
July 29, 2010 20:29
I would love to know why the folks at Dr. Dobbs or myself (writer for TechRepublic in their Programming & Development section) can't get a hold of these demo units, despite asking PR folks. Meanwhile, non-developers like Ed Bott and Mark Miller at ZDNet are able to get them. Doesn't Microsoft want to encourage us to take a look at the development story and talk about it ourselves?

Justin James
July 29, 2010 20:39
Did you wake up your wife when you knocked over the camera? Good video, thanks for sharing.

Scott
July 29, 2010 20:42
Justin - I dunno. I'm just a caveman who wants to write some apps. Ask Brandon Watson, as he's the owner of my device. I think the point is to get folks developing apps. The "experience" isn't set yet...I'm sure it's in flux. Maybe they are waiting for thing to bake more. I'm not involved.

Thanks and I look forward to more info!

The only way to get a dev device is to write an app, and post it on YouTube with the #wp7dev tag, and then contact your local Champion and ask them to review it for you...There is still no guarantee even if you are on the list since there is a limited number of devices...

https://www.google.com/accounts/o8/id?id=AItOawlfBgSaZFm5zvbvk-wg-Sisc2HaANVj33k
July 29, 2010 23:26
"It just works" is cool. But I foresee a lot of people having the same problems with the Facebook integration.
If it supports lists on Facebook, then that could solve the problem. You could define the lists it should sync with.

Ngewi Fet
July 29, 2010 23:35
Thanks for the review. Warning to headphone users like me, around 12:46 some fumbling of the device may cause you to go deaf for a few moments and scream something at the screen.

With no apps yet I am not sure I will be willing to part with my iPhone just yet.

https://www.google.com/accounts/o8/id?id=AItOawm5liYCuScoGkkZ64AxeFhESQudl-nj9N4
July 30, 2010 0:11
I cannot work on a phone without the HW keyboard either. I am using one of the WP7 models with the keyboard and they are definitely good. That said of all the touch-screen phones I've used WP7 on-screen keyboard works best for me

Abhinaba
July 30, 2010 1:24
Thanks so much for doing this. The phone looks awesome. I like the minimalist interface. I love my iPhone, but sometimes it's hard to distinguish what's tap-able and what is just graphics.

I guess I'll be putting my iPhone out to pasture in October (hopefully from what I've read) and trying this one out.

Only suggestion so far, I'd prefer the buttons had capitalize text, "Allow" vs. "allow", looks more professional, but that's a personal preference of mine.

Chris
July 30, 2010 16:49
Scott—I’m jealous that you got to try out the Windows 7 phone, thanks for the video! Good to hear that it works smoothly, it looks like a sleek design, too. How is the reception? Does it really not have a FourSquare app? That is very surprising. As for your friend list, I’m pretty sure “normal” people aren’t as popular as you are—3,500 contacts is a lot! Maybe only adding 200 contacts to your phone would be better, what do you think?

TuneUp
July 30, 2010 21:05
TuneUp - it's not released, so there are no apps. There's an open source FourSquare app. I'm sure that all the usual suspects will have apps out when it releases.

Believe me, it's not crippling us...

Tom
August 01, 2010 0:00
As you said in the article the UI speed and slight jerkyness in the original demos seems to have gone which is great. I can't wait to get my hands on one I know there are some things missing still but I am expecting a pretty quick release schedule. The developer story is just too good to miss for me.

As far as I know, the only way to connect with it thru the PC is via the Zune software.

Jon
August 04, 2010 2:38
Will the DLR be available on Windows Phone 7? Are they going to charge to sell an app in the mobile market place?

https://www.google.com/accounts/o8/id?id=AItOawn8t7G33IHUBrMSbE1ag-lKxeJQs4a0ja8
August 09, 2010 19:13
This phone looks nice and I think Microsoft's approach to development on mobile devices is improved. The key to any mobile platform and especially this one, is developer adoption. If no one develops any applications for it then it is just a phone and will die.

Microsoft needs a great story, not just..here are some tools, go create a market for me please. I would think MS would have the tools but also provide developer devices (if they have, then I missed them) to developers and help them bring these things to market and help market. Apple already had a huge fan base when the iPhone came out but MS does not have that luxury, they lost developers and continue to do so. MS needs a smart approach to bring them back but it is going to cost some $$$ before it will happen. I think this will show the true commitment to mobile by MS or it will just be another failed phone by the company.

Also loved the "hipster doofus" comment. That is what I refer to my NYC-living, music-making brother in law.

I'll definitely be looking forward to your diabetes app esp. if you need beta testers. Once I get my WinP7 phone, of course.