A better automatic translation system - one that learns

Google gets more and more clever. I've used Babelfish for years to machine-translate other languages into English. It's always been a little stilted, to say the least.

Google's been updating their translation software - a lot - lately, and has introduced some new stuff for Arabic, Chinese, Korean, Russian and Japanese.  Google was #1 three years ago, so you can pretty much count on this problem being 95% solved in our lifetimes.

My knowledge of Arabic is completely gone. I took it in college, but those braincells have been overwritten with Zulu (Ndebele) and Amharic and most recently, sign language (ASL).

I used this new tool to read the Arabic version of Al Jazeera today. It's not bad, much better than the usual broken English you are used to. The brilliant part is that you can hover over some text and teach it by suggesting a better translation. What a wonderful "mechanical turk" way of learning colloquialisms. 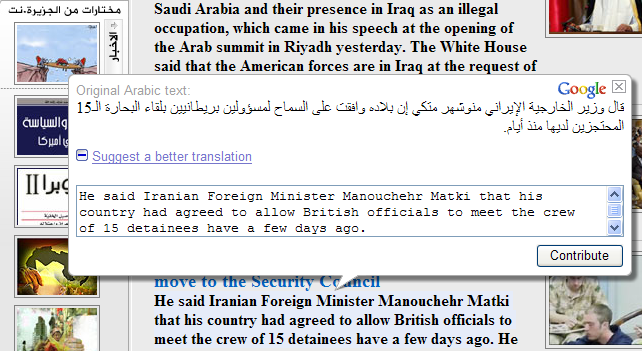 Just for fun, take a look at my recent post On Losing Data, machine translated into Arabic by Google. Google messes up my stylesheet, but you get the idea.

My buddy Wessam in Lebanon says via IM:

Well, its better than the other translators I used before, but still has lots of mistakes. Actually if you don't read the english version, you won't understand half of it.

Interestingly it's WAY better turning Arabic into English than it is turning English into Arabic.

One final note - "If you prefer not have your page translated by Google Translate, just insert the following meta tag into your html file..."

I know Arabic very well and, yes, the Arabic produced is not very correct but one can still understand the topic. I noticed the month 'March' was translated to 'Azar' (coptic calendar?) which is used only in countries like Lebanon, Syria and that part of the region. North African countries and the Arabian Gulf understand 'Mares' as the month for March and similarly for the rest of the known calendar.

abdu
March 29, 2007 20:35
Google has always been the first company to offer a majority of their services (Gmail, Notebook, Calendar, Docs & Spreadsheets ... ) in more languages than Microsoft or Yahoo. Anyone remember 'Google in Your Language' where you could help with translation of your language?

Leo
March 29, 2007 20:54
Hi Scott i am a native arabic speaker as you know, and i see that the translation is the best produced translation i've ever read.

I wonder if the rest of languages as good. thanks for the head's up.

Adel
March 30, 2007 2:53
This is totally off topic, but you need to fix/change the audio control you use to embed the podcast in your post. I was listening to a copy of your show that I had downloaded earlier, and I went to visit your site and suddenly the theme song starts playing right while you're in the middle of talking. At first I though something terribly bizzare had occured in the torrent, but I paused media player and realized the other stream was in the web page.

It took me a while to find the actual control too. I had to scroll down to the end of the page (March 23). The only reason I'm posting on this here is to make you see it. (Do you check comments on older posts?) Please make the audio not start on page load. Thanks.

Oh, and the Google translation tool is really cool. :-)

Scott Hanselman
April 01, 2007 21:18
I certainly like the new look of the blog better than the one before. But it still has some chinks to work out I guess. I noticed that some parts of the main column spill over to the sidebar (which hides some of the tags in the tag cloud). (Case in point is the Google Ad Unit, which over extends to the side bar), but on the main page, some images in the post also extend)

Also, it will take getting used to. But, its still an improvement.