"Well, it's up.  After screwing with FTP permissions on and off for a week, my weblog is up.  Sigh, I'm blogging.  We'll see how long it lasts."

What a powerful first post. Moving, really. ;) A harbinger of great things.

I noticed a kind of a pattern in the numbers next to the Months, like September 2007 (21), and graphed it real quick. Looks like I post an average of 32 posts a month over the last 5 years, with outliers clipped (a trimmed mean). I started slow, with just 21 posts in the first six months, then something happened. Somewhere in October of 2002, I found my blog's (first) voice, did 44 posts, and haven't shut up since. The max? An obnoxious 64 posts in June of 2004 - of widely varying quality, but a few classics that get lots of traffic today. 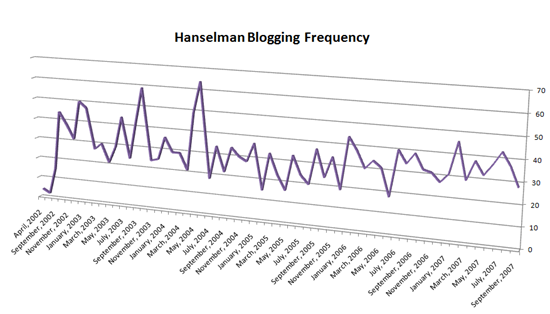 I started on Radio Userland as a blogging platform, then decided a few short months later that it wasn't working for me. I moved to DasBlog in September of 2003, and posted about how to redirect all my old content and comments.

Aside, my original Radio blog is still out there, as Radio won't let you 301/302 your links, but the template included a META redirect and a Javascript timed redirect, and I've imported ALL that content into DasBlog (hence some of the funky generated titles - there was a time when Radio let you post to your blog without titles) and you'll get auto-redirected to the same post. 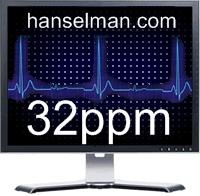 Now, I've got 1914 posts, counting this one. I may start doing a "greatest hits" or maybe a Popular Posts link so folks can come straight to the 10-15 posts they most likely came looking for. What do you think? LifeHacker does a Retro Roundup each week. Kind of a "this day in history" post. I could probably do one once a month. Just a thought.

At any rate, the point of this post. I believe that a blog has a heartbeat. Mine, without me thinking about it is about 32 posts per month or 32ppm. I think it's probably good to have a consistent one, while the number isn't that important, the tempo is. There are some blogs I read that are 5ppm or less, but they make each post count. For example, Atwood's blog is consistently about 20ppm (guess) but they are 90% gold. Slashdot's is hundreds of ppm but I've stopped caring.

You can click on that ppm image above for a Paint.NET layered file if you want to make your own PPM image.

Personally, I'd vote against a "standard" roundup post. I loved Lifehacker, but it drove me away with so many re-hashed "roundup" posts and a poor signal to noise ratio (for my particular interests, to be fair). I think you should only link to your own posts organically such as related posts to a current/new post, or if something strikes you to point people back to an old post (in other words a post now and then that just highlights some old posts with some new context would be certainly justifiable). But I think it's not necessary just to iterate through a best of as a regular part of your RSS feed. Maybe a "best of" page/section?

Scott Hanselman
September 25, 2007 4:53
I would suggest that you have the "Archives" link in the top nav go to a new page that has your 10-20 best posts, and then have THAT page link through to the current Archive.

Two reasons:
1. There's already a lot in the top nav and adding another will only clutter.
2. The HTML alone for the current archive is >1.5MB. Casual visitors don't want a 1.5MB page when they click on a topnav link.

October 21, 2002:
"Matt Griffith Did Me A Solid Today By Having A Nice A Hrefhttpmattgriff"

Needless to say, the blog has been among the best since then. Here's to another five years of outstanding posts! I'll probably have half of the 2012 Tools list installed on my 16-core, eight-monitor pentium :-)

Frank
September 25, 2007 7:31
Hey Scott, there are people with "most popular posts" and they haven't even been around for a full year. I like the "greatest hits" concept b/c I know that I look for it when I see a new blog. The "tag cloud" is nice too, but being able to read a best of, gives me a good incentive to add the blog to my RSS reader.

Gates VP
September 25, 2007 7:41
Dang, now you've inspired me to start updating to my blog more often! I even have a bunch of planned articles, I just never seem to have or make the time to finish a lot of it.

Rick Brewster
September 25, 2007 8:23
I had some spare time and wanted to play with custom web controls, so I created a PostsPerMonth control.

Now, I don't see the point for a "greatest hits" section, as we readers either come from RSS/addiction (thus we read everything) or web searches (which I assume are ending on the proper "hot" post for them in the first place). Are there many visitors "spidering" through your posts?

Martin Plante
September 25, 2007 11:01
I find no use for Top X or greatest posts since I read them all and older posts are history to me as I move forward to reading new posts everyday. I always skip Lifehacker's TGIF piece.

What I have found a mystery is the disappearance of "Other blogs I read" section from many blogs. Since "smart" bloggers tend to read other "smart" people blogs, it gave me an opportunity to get introduced to good blogs. However now I ask myself why they stopped doing it.

The posts per month thing is interesting, I never thought about it. I figured mine out to be 6.15ppm since I started blogging in June 2004. I kind of figured it would be higher, but I guess that makes sense; I've only made 246 posts as of today.

Chris Pietschmann
September 25, 2007 19:36
I wish I was more consistent with my blogging over the years. but I have moved from different servers, different platforms, and different directions. Scott, it's great that you've been blogging daily since starting this page. Since discovering this page I use a lot of the tips in my own work.

My first blog was about drunken college randomness (with pics of course). I'm still reluctant to post too much online. I fear of some of my code finds its way to worsethanfailure and will live on the internet...forever.

Joe Chin
September 25, 2007 19:48
What I have seen on a bunch of blogs is a "related posts" at the bottom of each post. This is usually a 3-4 title listing of posts which are connected to the current post.

I think that would be cool. Also, I always skip the LifeHacker round-ups as well. Because, either I have already read them or already skipped them in the past. Please do not make your blog so commercial like that.

Vaibhav
September 25, 2007 21:33
The comparison to a heartbeat is interesting... blogs, I've found, tend to be organic. Mine started as a way to keep in touch with out of state friends (or, in state friends since I'm the one who left, really) and morphed over time into the randomness that it is today. Still, aside from the anomalous string of posts where I described my trip to Portland in daily chapter form, my blog appears to have a sad 8ppm heartbeat.

(and I have to say it... you graphed your blog entries? You are such a geek.)

Jerry Ann
September 27, 2007 6:16
I'm personally interested in words per months as well and compare the graph of posts per month.

I have been blogging now for about 9 months. My blog's heartbeat is about 14. I have my favorites of your blogs and I generally just use your search to find the subject that I want. There is no way I can, or would want to, remember the month that you made the certain post I am looking for at the given visit.

You have so much stuff on the right navbar that I don't look there much. If you could get stuff on the left to balance out the page, it might be worth people checking out all the cool stuff you have.