A Call for Good Design - One Guy, an Insulin Pump, 8 PDAs and an iPod 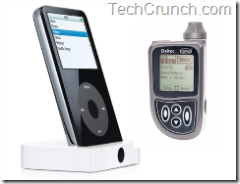 The trip was written up, lo these many years ago, at The Feature.com and is still available in their archives as "One Guy, an Insulin Pump, and 8 PDAs".

Here's a few bits of that article that I thought were significant or interesting with new emphasis mine:

Now I've got three devices in my pocket -- each with screens, batteries, and buttons, but all alone in the world. Three devices, each with a distinct purpose, provide me with a little bit of information that I give my doctor. It's quite a mess, especially when it's time to change the batteries.

Of course, each of these devices has some interface to the outside world, but each comes with an interoperability catch. The pump has infrared, but it only communicates with proprietary software. The blood sugar meter has a serial port, but it only works with a custom cable and software. My cell phone has some kind of interface on its bottom, but no standard way to hook it up to any of these devices. The PalmPilot has a serial connector and infrared, but doesn't have support from the notoriously slow-moving healthcare industry. [Scott Hanselman writing for TheFeature.com in 2001]

The trip was fun - it was my wife and my first date, and she and I were married three months later, but from a technology perspective it was a huge failure. The technology wasn't ready.

Today, Amy Tenderich has a great Open Letter to Steve Jobs (Mental Note: Write an Open Letter to Someone) up on her blog, DiabetesMine.com and TechCrunch is helping spread the good word.

Apple has sold 100 million iPods, and she points out that 20 million diabetics are using Glucose Meters and Insulin Pumps that smell of 1997.

There's a few issues here that are a problem, Amy's interested in better design and User Experience. She says:

In short, medical device manufacturers are stuck in a bygone era; they continue to design these products in an engineering-driven, physician-centered bubble. They have not yet grasped the concept that medical devices are also life devices, and therefore need to feel good and look good for the patients using them 24/7, in addition to keeping us alive.

Clearly, we need a visionary to champion this disconnect. We need an organization on the cutting edge of consumer design to get vocal about this issue. Ideally, we need a “gadget guru” like Jonathan Ive to show the medical device industry what is possible. [Amy Tenderich]

She's right on. Additionally for me, as an engineer, I want to know where's the iTunes Killer App for my Insulin Pump and Meter? Plugin and sync. Is that so far? I'm personally interested in the other side of the User Experience - getting at the data locked in these little devices. Well, we're working on it, but getting the data out of these meters is like pulling teeth.

You can download the LifeScan OneTouch Ultra RS-232 Serial Protocol up at the LifeScan site, but the protocol for their flagship device, the UltraSmart (a now FOUR YEAR OLD meter) is hidden, encoded and proprietary. Kind of makes our ClickOnce Diabetes Downloader a little hard to implement, wouldn't you think?

It's very frustrating as we, the technical Diabetic community, try to move things forward that:

Even my brand new, this year, insulin pump uses a cobbled together cable along with proprietary RF to dump it's data. And where does it dump the data to? A proprietary java-based Applet online that I have yet to get to work.

Maybe future meters will change this, or maybe someone from LifeScan will read this and release the UltraSmart meter protocol.

In the comments on TechCrunch, a Diabetes Technologist teases us with this tantalizing tidbit:

I’m a firmware engineer on a blood glucose meter at a very large, well known company. I agree that this is a great idea. I’d be much more excited if our product wasn’t a solid 5 years behind in design for a handheld device. We do have a product coming out in a couple years and the preliminary designs could possibly be the best looking meter I’ve seen to date. Sorry, I can’t disclose anything else about it!

I imagine a world of true digital convergence -- assuming that I won't be cured of diabetes by some biological means in my lifetime -- an implanted pump and glucose sensor, an advanced artificial pancreas. A closed system for diabetics that automatically senses sugar levels and delivers insulin has been the diabetics' holy grail for years. But with the advent of wireless technology and the Internet, my already optimistic vision has brightened. If I had an implanted device with wireless capabilities, it could be in constant contact with my doctor. If the pump failed, it could simultaneously alert me, my doctor, and the local emergency room, downloading my health history in preparation for my visit. If it was running low on insulin, the pump could report its status to my insurance company, and I'd have new insulin delivered to my doorstep the next day.

We're not there yet. Thanks, Amy, for helping move the ball forward and cast some light on this problem. Medical devices lack 5 to 10 years in usability. We need updated UIs and updated and open Protocol Specs.

Andrew Shebanow
April 11, 2007 17:55
Interesting idea, too - 6 or so months ago, I might have questioned the plausibility of a device that sounds like this, but now that iPod's teamed up with Nike to create that little Bluetooth or whatever it is dongle that stores information and talks to your iPod (or computer), it sort of begs the question - how hard can bolting Bluetooth onto an insulin pump be? And yes, that's spoken like a developer who didn't get any further than Digital Electronics in college.
I'd go so far as to say that if it proved a success, the pump could be stripped to its bare essence, but then I remembered that at the end of the day, an iPod is a nicety and an insulin pump is a lifesaving device; offloading the interface to an externality is one of the quicker paths to fulfilling Murphy's Law that I can think of.

dave solomon
April 11, 2007 21:24
It's more than the meter people holding onto their proprietory specs -- it's the meter people too. I've asked Animas and they said they would never release them. But at least they use a standard IR.

Oh, and I have the codes to download the Glucowatch if anyone wants them.

The kind of world that you describe in that old article is exactly what i am hoping to work on. The kind of world where technology works transparently to help you. Specifically, i am aiming at the medical sector because it always seems left behind and thus i am always on the lookout for such ideas.

I keep on reminding people that any sort of improvement in that sector can help save a life. If i can current procedures to work 1 second faster, then that is one less second of suffering for a human being(or a soul if you're spiritual).

I am already working on a few ideas and always interested in pursuing more. My current problem is the lack of investors. So if you have any specific thing that you want to work on or can help in a certain area, get in touch with me please.

I am not a diabetic but i do understand the hassle that it brings and if i can do anything to make it better, i will. This sounds like an absurd "change the world" thing, but why not. I will at least try.(or like you said, "i will die trying")

I recently finished up a development project with the diabetes research department at a school of medicine near me, and am aware of several other projects going on there as well. One example of the "convergence" you're talking about is the LG KP-8400 cell phone that is now being used. The phone includes a tester, and can send test results to a central server for logging and additional analysis. I bid on a project to apply "expert system"-style analysis to the aggregated test results to automatically flag various events for patient follow-up. So some progress is being made, though it's shameful that it takes so long to go anywhere.

I have been trying to get hold of the CIO of LifeScan (JNJ opco) to no avail. I will forward your post through my channels to him and see if we can get a dialog going.

do you want to work in Life Sciences at Microsoft to solve problems like this? send me an email......

Nice thread - great ideas - lots of energy... and then you realize that what we're talking about here is governed by federal regulations concerning medical devices and software that connects to these medical devices. Yes we did have a good start on this notion of universal data formats for diabetes relevant stuff back in 2003. Ultimately, the project quickly surpassed the challenge of just getting the data (problem solved in our real-time GlucoDYNAMIX system). We moved on to the challenge (never ending too) of figuring out what in the heck should you do with the data? Our first use was real-time alerts for parents of kids w type 1. It's been a 5 year effort so far and we've moved well beyond that first feature. Our latest research efforts include a pancreatic islet cell transplant screening and monitoring protocol with our partner Baylor Health Care in Texas and working with type 2 patients on an educational social networking program.