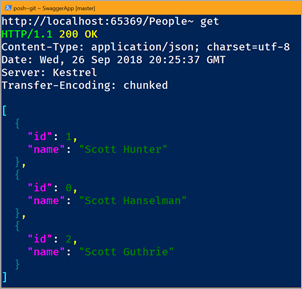 My that's a lot of acronyms. REPL means "Read Evaluate Print Loop." You know how you can run "python" and then just type 2+2 and get answer? That's a type of REPL.

The ASP.NET Core team is building a REPL that lets you explore and interact with your RESTful services. Ideally your services will have Swagger/OpenAPI available that describes the service. Right now this Http-REPL is just being developed and they're aiming to release it as a .NET Core Global Tool in .NET Core 2.2.

For the HTTP-REPL, since it's not yet released you have to point the Tool Feed to a daily build location, so do this:

Then run it with "dotnet httprepl." I'd like another name? What do you think? RESTy? POSTr? API Test? API View?

Here's an example run where I start up a Web API.

Take a moment and read that. It can be a little confusing. It's not HTTPie, it's not Curl, but it's also not PostMan. it's something that you run and stay running if you're a command line person and enjoy that space. It's as if you "cd (change directory)" and "mount" a disk into your Web API.

You can use all the HTTP Verbs, and when POSTing you can set a default text editor and it will launch the editor with the JSON written for you! Give it a try!

I'm really enjoy this idea. I'm curious how you find it and how you'd see it being used. Sound off in the comments.

It's as if you "cd (change directory)" and "mount" a disk into your Web API.

hangy
September 27, 2018 0:54
This is great, but I must admit I had the same thought as Travis. I often use Invoke-RestMethod in PowerShell for exploring REST APIs but this article made me think how cool it would be to have a proper PowerShell Provider for it as well.

It is located at \AppData\Local\Programs\Microsoft VS Code and you can just put the full path after `code.exe`

I'm not advocating to go with one or the other, but I did find it interesting and thought it would be advantageous for the two teams to work together on the Http REPL.

Matt Wuertz
September 29, 2018 15:13
This is an awesome idea. I'd love to use this for a HAL-style api (https://en.wikipedia.org/wiki/Hypertext_Application_Language)
then you could list out the rel links and follow them. You could do things like "self", "next", "prev", "first", "last" and navigate automatically.

Morten Meisler
September 30, 2018 14:52
Ever heard of https://github.com/eliangcs/http-prompt in Python?