A few weeks back I installed Tim Heuer's excellent Foxit PDF Preview Handler for Outlook 2007. Worked great. I had (fervently) lamented the slowness of Acrobat, and folks in the comments - including an Adobe employee - commented that Acrobat 8 was way better and way faster than before. I figured today I'd give Acrobat 8 a try on Vista since Ryan Gregg just released a PDF Preview Handler that uses Adobe's ActiveX SDK.

Acrobat 8 on Vista is supposed to be nice because you get Thumbnail support and Search-ability for PDFs. I fired up the installer and was greeted with this error: 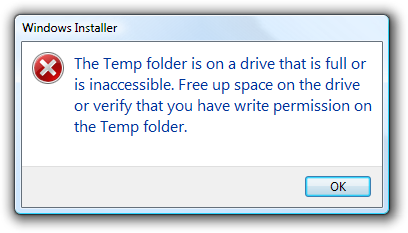 Certainly they could have figured out if the drive was full by asking the drive if it was full. Instead, this error says (basically) "something went wrong writing to a file, and I'm not sure what. Go ahead and see what you can do about it, user."

Adobe's installer is trying to be clever and it's first squishy installer unpacks the real MSI installed into a folder that installers that will be elevated don't have access to. This happens on machines, like mine, that have UAC (User Access Control) turned off. Then, after the unpack/install files the temporary files are deleted.

Adobe's known about this, surely, at least since December. Why isn't #4 an option here in late March?

Either way, I got Acrobat 8 install eventually and it IS faster and it works great with Ryan's Preview Handler. Now we can choose between either Acrobat or Foxit and have Preview Handlers for both. Huzzah!

Comment on this post [17]
Share on Twitter or Facebook or use the Permalink
March 26, 2007 6:27
So now that you've used Acrobat 8 for more than a few minutes, have you looked in your Documents folder? There's a delightful little "Updater5" directory that'll show up no matter how many times you delete it. Trying to figure out how to make that stop is a lot of fun, too. You should give it a go yourself before you give up and google for the solution.

c
March 26, 2007 8:00
Scott, sorry for the somewhat off topic comment. If anyone from Adobe is reading this post, please stop trying to covertly bundle other software with reader. It is quite annoying. If you really think you need to bundle the software, at least try to make it more obvious to the user. And, seriously, I just installed this thing which obviously connected and downloaded the latest version, but when I check for updates it has to download an update? What is the point of the installer that downloads the not-latest-version? There has clearly been too little competition in this market for too long.

DM
March 26, 2007 11:22
Hey Scott,
I too am running into things like this and wonder how much family/friends tech support Vista is going to cost me in the coming years. Here is an example of one that's left me wondering:

Steve Trefethen
March 26, 2007 13:40
I'm pretty sure Acrobat is pure garbage. The reader for 8, while streamlined, doesn't seem to even have adequate window resize handling. If I resize or maximize a window, the client area doesn't get the message, so effectively a resize operation is not supported in Acrobat Reader 8. I'm using Windows Vista 64-bit with a Radeon x850 graphics card.

I encountered the exact same issue you did, and ended up finding I had the same options. This behavior appears to be isolated to power users (i.e. anyone who's changed their computer's settings from the defaults), which is probably why Adobe hasn't bothered to fix the problem.

Their only saving grace is the power of the online community who can collectively work around these problems.

I'm a big fan of foxit and XPS, which I hope bring enough competition to the table to force Adobe to get its act together (or fail and lose market share).

Jason R. Coombs
March 26, 2007 14:07
Dear Scott,
Expecting Adobe to mend their ways is hoping for the Padres to win the world series, it may happen... but you'll be quite surprised.
On the solutions you've listed:
1) Not that easy, it's similar to grabbing the Yahoo Messenger bare installer (with no bundles & other shenanigans). You have make a CTRL drag of the exe just when the download finishes and before it finishes installing (from inside Program Files and not %TEMP%) as it deletes itself right after it finishes.
2) I my humble opinion changing Local Security Policy to automatic elevation for the admin accounts would be better compared to completely disabling UAC.
3) Netopsystems "FEAD optimizer" is a buzzword that probably lured Adobe to use it. Poor customers, it's them who suffer, not Adobe.
4) As you've already installed it, one way or the other you don't need to wait.

Saurabh Chowdhury
March 26, 2007 16:47
Woo, woo, woo. Where was the meditation on turning UAC off? I just googled "uac site:hanselman.com" and found several references to running with UAC off, but not the thoughts that motivated your decision to take such drastic action. I would love to hear it.

flipdoubt
March 26, 2007 21:39
Not very related to the topic here but why do most software companies use cryptic file names for their downloads? I have downloaded hundreds of install files and most of the time I have to rename the file to something meaningful and descriptive. The most annoying name is "setup.exe". As if I will remember what software this belongs to a week from now.

8 letter file names are common too. What happened to long file names which have been suppported for more than 10 years?

What's pase30? What's DLM? Do we care? why is 'reader' abbreviated?

How about just a plain descriptive filename like "Adobe_Acrobat_Reader_v80_en_US_Install.exe"? My XP will happily accept these nice filenames.

Also when an install is for a trial software, include 'trial' in the file name.

It's all part of the grand conspiracy by software companies. They can never make things "too easy" for users. That's just the way it is.

LocalLow is the temporary directory for Protected Mode IE. There's a great post over here that talks about this directory in passing while talking about UAC & Security Boundaries.

gloubidou
March 28, 2007 2:55
Thanks for the post. Just in the nick of time. I ran into this just today. Putting it in compatibility mode for xpsp2 and running as admin did it for me.
Scott, I really wish you promoted UAC, though. Like you I have mine turned off. I plan on eventually turning it back on and adapting to the controls, though. Mark Russinovich recently had a great interview on Channel 9 in which he and Charles of Channel 9 spoke on Vista.
http://channel9.msdn.com/showpost.aspx?postid=294410
They mentioned UAC and how it kinda dies down on prompts as you eventually get your system changes made. I dunno. I'm sure we'll all embrace it eventually.

I love your site!

Jayme Davis
April 12, 2007 21:29
Well good for Adobe to be reading this, but how about they ACTUALLY fix these problems? Is anyone else in here SICK AND TIRED of software companies not fixinf things, but rather releasing work arounds? Work Around is another way of putting the burden on the user. Way to go Adobe, engender some more user good will why don't you. FIX THE INSTALLER, don't force US to encounter the problem, go searching for a solution, and eventually stumble onto a work around you are too lazy to implement in the installer.

WE DON'T HAVE TO HAVE UAC TURNED ON!

Bobbo
April 14, 2007 19:18
After years of working with Adobe products, I think I can say in all fairness that they hire retards to write their installers.

I can't even keep track of all the issues I've run into over the years with installing various Adobe products, and yet can hardly remember having install problems with the vast majority of the other software I use.

What's up with these guys?

Note: You can turn off User Account Control after you successfully install Adobe Reader.