All the world abuzz about Sudoku 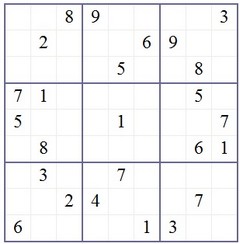 At a conference recently, I asked a delegate from Japan about Sudoku (??, sudoku) presuming that he, being from the originating country, would have some insights I didn't. Oddly enough he hadn't heard of it. Is this Japanese game sweeping the world, save Japan?

From WebSudoku.com: The rules of Sudoku are simple. Enter digits from 1 to 9 into the blank spaces. Every row must contain one of each digit. So must every column, as must every 3x3 square.

Folks seem obsessed with it. When I came upon the puzzle I figured it was a fluke, a curiosity, but then I noticed that American Airlines had Sudoku proudly displayed next to their Crossword Puzzles in the in-flight magazine. It's big in the UK. Some are 'unsolvable' (really hard, no logic applies). PocketMod includes pages with generated Sudoku puzzles.

Personally, I did a few, found it hard, found it interesting, but not that engaging. I mean, it doesn't tickle the nice parts of my brain like Crosswords. I feel that Crosswords require thinking, while Sudoku requires processing. Maybe that's not phrased well, but I think that since most programmers first instinct is to write a solver, and some write the solver faster than they can solve the puzzle just proves my point. Computers are a tool, my brain is not a computer. But, my brain can use a computer to solve a Soduku better than by itself. Trying to make my brain work like a computer just makes it ache.

BTW, don't mis-spell it, because Soduku is rat-bite fever!

buk
October 15, 2005 2:01
Buk, you're the first person I've met who actually supports the theory that this game is sweeping the nation. I thought that it was a giant marketing ploy, because I've yet to meet anyone who has done more than 2 or 3 puzzles TOTAL, and a good number of people who've never heard of the game.

I have a friend who has what I call Compulsive Gadget Syndrome. He is unable to ignore hand held puzzles or chotchkeys.

Those things have a mysterious alien like power over him. It's kinda like the lock-in look that a dog gets when it sees a cat. He's got to pick them up and can't stop figgeting with them no matter what.

I'm going to pass this on to my friend and see if the addication extends to digital puzzles.

Michael Teper
October 16, 2005 4:57
I would have to be more bored than I've ever been in my whole entire life to do consider doing a puzzle like that...and that's pretty bored!

Andy
October 17, 2005 1:59
I have no time for Sudoku on paper, but the version I can do onscreen is a lovely way to completely remove yourself from a waiting room, airport lounge, or other noisy and nasty environment. Each puzzle doesn't take long (my times run about 10-15 minutes, I'm sure others are faster) and you can cheat or not as you prefer. http://www.sudoku.com/ of course, and I believe it was $20 to get a legal copy once the trial expired. Also if you don't like numbers for some reason the online thing lets you work with letters, shapes, or colours.

As a matter of fact, that's exactly what I did. Didn't even get past my first puzzle ;) http://www.emperorxlii.com/sudoku/

Paul A Hansen
October 17, 2005 13:03
Well, you're right, it is indeed sweeping the UK, with many a book being published about it, and all the major Newspapers going crazy - also seems to be having a similar effect in New Zealand.

I don't find the Sudoku puzzles all that interesting myself, but here's something I heard: something like 80% of the people that enjoy Sudoku are women - and that seems to be backed up by my own observation that all the people I know of who like it are women - none of the men I know seem to be interested in it.

Wonder if this will be the same in the States...

Dourn
October 17, 2005 14:18
oops, you are into the hard side of Sudoku. For beginners and curious learners, the easy way may be to start with a one-minute sudoku, please help yourself at http://www.somewherein.net/blog/?p=117. in our company somewhere in..., every day we gather the team for a small game or challenge, and sudoku has just made them all so crazy that we had to restrict new games to be played only in the car to and from office...

What does Su Doku actually mean? None of my Japanese colleagues seem to know the original Japanese name. Ryoko Attwell, Buckinghamshire

You won’t find Su Doku in a Japanese dictionary. It’s a coined word, made up by a Japanese publisher – just like advertising men here make up words like KwikRite and StopzIt. I don’t speak Japanese, but as I understand it Su stands for number, and Doku has some notion of singularity or bachelorhood about it, emphasizing perhaps that there is only one of each number in each unit (row/column/box).

Sam
October 17, 2005 17:45
Scott's right. After playing it twice by hand I was forced to code it up. I wrote a WinForms app that solves it while attempting to show the varying constraints as successive cells are filled in (by showing in each cell the values allowed by rule).

The problem is finding puzzles that are sufficiently difficult that backtracking is actually required (which is visually more interesting). Most of the published puzzles in newspapers and books – although challenging to the human – don’t require the program to backtrack even once.

I did find a few examples that cause the program to backtrack (the best I found were at http://www.conceptispuzzles.com/products/sudoku/puzzle_samples.htm). If anyone would like the code, let me know.

Howard Pinsley
December 02, 2005 20:57
I look for an OPL (optimization programming langage) file with extension .mod (the code on OPL) to resolve a Sudoku problem.

In others words : How to programming Sudoku in OPL langage

Thank you very much