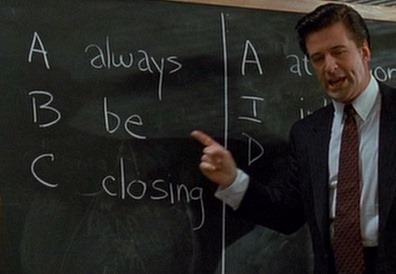 I was looking at a Well Known Open Source Project on GitHub today. It had like 978 Pull Requests. A "PR" means "hey here's some code I did for your project, you can PULL it from here and merge it into your code!"

Why do Pull Requests stay open?

Thanks to Jon and Immo for their thoughts on this (likely incomplete) list. Jess Frazelle has a great post on "The Art of Closing" that I just found, and it includes a glorious gif from Glengarry Glen Ross where Always Be Closing comes from (warning, clip has dated and offensive language).

Jess suggests a few ways to Always Be Closing.

What do you think? Why do PRs stay open?

Comment on this post [10]
Share on Twitter or Facebook or use the Permalink
September 06, 2018 15:13
Governance of Open Source software is a little bit broken here: you can help by sending the code, but not by reviewing the code as there is a trust issue between maintainers and contributors. Maintainers are often overworked and hence either looking for monetization, or neglecting the project.

From my perspective, if there is any point in using centralized platforms like GitHub instead of decentralized solutions, it's because GitHub might be able to solve this trust and governance issues.

Lukáš Lánský
September 06, 2018 22:56
Anyone have a study or statistics on the lifespan of open source projects and how many move from high development activity to near-dead with a few years?

We are unlikely to use an open source library with no commit activity for the last 12 months. That's one of our first checks before reviewing the suitability of it to our needs.

Tom
September 07, 2018 18:14
@Lucas: OS License and Reviews my maintainers are in no way related to each other. First tells you how others can use the code where a maintainer just makes sure that PRs of a certain quality and standards get merged.

OSS Projects where everyone can merge any change, end up in a huge ball of mud.

@Tom: Well the point of open source is that it's open and if a package isn't maintained, you can take the source and do the changes or fix your bug and create a fork of it.

Desy
September 08, 2018 14:01
These mostly apply to code contributions. But I often contribute to Microsoft Docs, in the form of typo fixes, technical corrections, etc. Some repos respond very fast. But there are others, like MicrosoftDocs/Virtualization-Documentation, which seem to be dead.

Fleet Command
September 11, 2018 13:40
In the same way I don't want to give away code to a project without OS licence. We are unlikely to use an open source library with no commit activity for the last 12 months. That's one of our first checks before reviewing the suitability of it to our needs.

robert carlos
September 12, 2018 7:30
There really is a disregard for this, I believe the best way is to share your contribution to other people beyond github, or even open a project similar to the contributed.

GoodzSex
September 12, 2018 18:08
absolutely convinced with GoodzSex. It's weird to call out the name so loud though. Stack Exchange Overflow too comes to the mix with Github.

Alex
September 13, 2018 12:20
Questionable fixes
Undisputed bugs should be great candidates to be fixed by the community, but the contributor needs to properly understand the bug and how to fix it. For example, "doing x causes a warning" should not normally be fixed by reducing the level of error reporting.

Ian Thomas
September 15, 2018 6:09
Another barrier to a PR being accepted is when the open source project has a primary owner that has the "my way or the highway" attitude, where noone could possibly come up with a solution better than what the owner was planning on doing "someday".