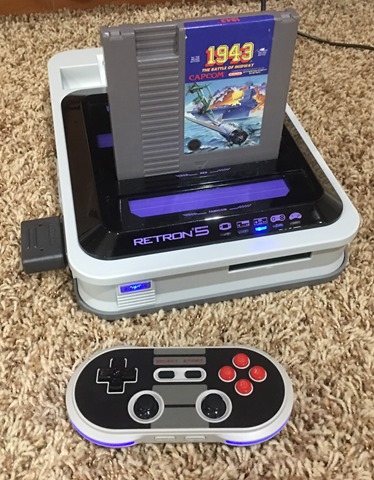 My kids and I are big fans of retrogaming. We have a whole collection of real consoles including N64, Dreamcast, PS2, Genesis, and more. However, playing these older consoles on new systems often involves a bunch of weird AV solutions to get HDMI out to your TV. Additionally, most retro controllers don't have a wire that's long enough for today's 55" and larger flatscreens.

We wanted a nice solution that would let us play a bunch of our games AND include a wireless controller option. Here's the combination of products that we ended up with for retrogaming this Christmas season.

Everyone's talking about how they can't find the NES Classic Edition. I'd spend that money on a Hyperkin and then go out and buy a few actual game carts from your local retro gaming shop.

I like the Hyperkin Retron 5 over the lesser models for a few reasons.

The only bad things about the Hyperkin Retron 5 is that the included controller kind of sucks and with all console games, you need to be fairly careful inserting and removing the cartridges.

You might assume the 8bitdo NES30 Pro Game Controller would be a cheap overseas knockoff controller but it's REALLY well made and it's REALLY more useful than I realized when I got it!

There are a number of these controllers from this company. The NES30 is nice but the NES30 Pro includes two analog sticks while still keeping the classic style. Think of it as almost a portable Xbox 360 controller! In fact, when you plug it into your PC with a USB cable it shows up as an Xbox 360 controller! That means it works great for Steam games. I've been carrying it in my bag on trips and gaming on my laptop. 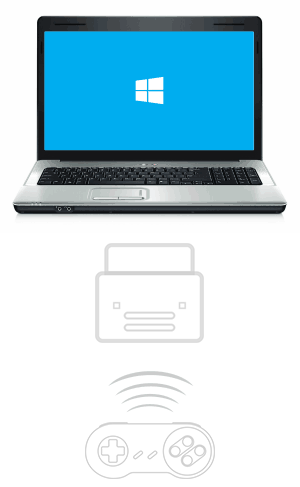 The build quality of the pad is great, but it's the extendable firmware that really makes the 8bitdo NES30 Pro shine. It has support to act as a Wiimote and even custom firmware for a...wait for it...Retron 5 mode! This means you can use this controller as a replacement for the Retron and play all the consoles it supports.

Even better, the 8bitdo NES30 Pro Game Controller also supports iOS, Android, etc. It's really just about perfect. My only complaint is that you have to turn it on while holding certain buttons in order to start in the various modes. So there's Bluetooth mode, iOS mode, Xbox mode, etc. Not a huge deal, but I've printed out the manual to keep it all straight.

Here's where the magic happened. Because the 8bitdo NES30 Pro is a Bluetooth device, there's wireless receivers available for it for most consoles! If you have an NES or you managed to find an NES Classic, there's an 8bitdo Retro Receiver for NES.

However, I recommend you get the 8bitdo Bluetooth SNES Retro Receiver and plug it into the Hyperkin Retron 5. This, for us, has been the sweet spot. It works great with all games and we've got HDMI output from the Retron while still being able to sit back on the couch and game. You can also get two if you like and play multiplayer. As for power, the receiver needs just 100mA and leeches that power from the SNES port.

Even better, this Retro Receiver lets you use existing controllers as wireless controllers to whatever! So you can use your Wii U or PS3 controllers (since they are Bluetooth!) and retrogame with those.

If that wasn't awesome enough, the Retro Receiver can act as a generic "X-Input" controller for your PC or Mac. You plug an included Micro-USB cable into it and then pair your PS3, PS4, or Wii Remote into your computer and use it!

To be clear, I have no relationship with the 8bitdo company but everything they make is gold.

You DO use Retropie, right?

Jim c
December 09, 2016 7:10
Jim C - Yes, I made a portable MAME machine with a Raspberry Pi and the CupCade plans from AdaFruit last week (my second one). Pics here.

Scott Hanselman
December 09, 2016 14:04
This is awesome! And at the moment it's cheaper to get the Hyperkin RetroN 5 than a NES Classic from a 3rd party seller (considering it's sold out everywhere).

Frank
December 09, 2016 16:09
Don't guess you know one that does this for the Atari lines? I ended up having to hack my Atari Flashback with a cartridge slot just to get an image that kind of works.

James O'Donnell
December 11, 2016 3:32
Scott, or anyone, do you know if the 8bitdo controllers will work with iOS games that support MFi (but not iCade)?

Jon Schneider
December 12, 2016 8:38
You've got to be careful with the Retron line of consoles. I was looking into gettong one until I read there have been reports of them corrupting save games on SNES carts. Along with some of the machine's cartridge slots being so tight it makes them very difficult to remove cartridges without damaging the physical connectors on the cartridge.

A few retro games magazines warn about this, but YMMV.