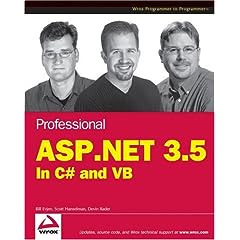 Seriously, 1728 pages? We couldn't drop a page or two? Nope. In keeping with our strategy that a person who buys our book should be able to beat off attackers with it, we're keeping it big and phat.

Coming in a few weeks, it's Professional ASP.NET 3.5 and it's heavy as heck. And, it's insanely cheap right now, only $32.99 at Amazon. Amazing.

We've added many hundreds of pages, new chapters, new samples and new coverage. It took a LONG time and it was very tiring.

Here's some text from the back cover:

The whole team worked very hard with Bill taking the lion's share of the work. We include examples in both C# and VB. We've also added parallel samples in the XML chapter that show how to accomplish a task with LINQ to XML as well as with System.XML, and Devin's added an all new chapter on LINQ with new LINQ samples throughout. We re-tested every code sample on Visual Studio 2008 and Vista, we re-shot every screenshot and we included IIS7 coverage on both Vista and Windows Server 2008.

As far as I know, it'll be published on Feb 14th, no matter what Amazon's page says. Enjoy.

Phil Fearon
January 15, 2008 17:53
Ah, so this is where half of the rain forsest went! Just kidding, this sounds promising. Keep up the great work.

James
January 15, 2008 18:57
I NEED IT. RUSSIAN PROGRAMMING WORLD IS WAITING FOR THIS BOOK. I'm 2nd year student and Fujitsu employee, I think I'll order it immediately after I get salary)

Polovnikov Vasily
January 15, 2008 20:45
Good job. Always wonder how you have the time to do everything you do.

I guess it's big because you have both VB & C# code in the same edition. I am not sure why you guys made this decision when most other authors separate these and books like yours are heavy in code samples.

Here in Portugal we can't buy books they are just to expensive.... :(

But still Congratulations to all of you who buy the book...

Rui Lima
January 16, 2008 20:38
Rui, wow I'm sorry, that seems abnormally high. Did you order from the US or from the UK? You should probably get it from a Portuguese Book Store in these cases, or from the UK.

EU customers should order from their local retailers whenever possible. For example on Amazon UK, the book is list priced by our UK arm at £33.99 and discounted to £16.98
http://www.amazon.co.uk/Professional-ASP-NET-3-5-C-VB/dp/0470187573.
UK delivery is free, I'm sure there's a delivery charge to Portugal but I'd think the import cost to another EU country from UK would be lower if anything.

Scott Hanselman
January 16, 2008 22:05
I'm sure that this is a fine book and a worthy edition to anyone's bookshelf, but in general those giant Wrox books tend to be fairly terrible. Obviously I don't have the time or inclination to read a 2000 page book cover-to-cover, nor would nearly anyone, so I assume they are intended as a reference. But if I need a reference, I have the entire internet at my fingertips, which has significantly better searching than bound paper.

People buy the giant books because they see how big they are and assume they are jam packed with information. And then they realize all that information is more easily obtained on the internet and decide computer books are useless. And then publishers wonder why the computer book industry is dying...

Shorter, readable books might, ultimately, sell better. One of my favorite Computer Books is the C++ Programmers Handbook by Kalev. 300 pages, short enough I can whip through it once a year and refresh my mind on C++ minutiae I may have forgotten. All the long reference-y books I chucked in the dumpster once I realized I never, ever used them.

Er, but again, I'm sure this is a fine book and the exception to the rule.

Matthew Henry
January 16, 2008 22:18
Matthew - LOL. I hear what you're saying and have had the same experience with some large books. The internet, and this blog (plug, plug) are good references, totally. This 2000 page book is not 2000 pages of pure prose, but also code samples, screenshots, diagrams, etc.

You're assuming that the internet reference articles has already put all these new technologies into context, checked, doublechecked and talked to the product teams about the right way to do things. That's where the work in a book like this goes. We might spend 2 weeks vetting a code sample to make sure it's the correct way to be thinking about a new technology, and we do that by talking to PMs, coders, testers, MVPs, managers, whoever was involved in that tech (and it's usually a lot of people.)

Lee
January 19, 2008 2:25
Hey Scott,
I almost purchased your book last month (2.0 version of this upcoming book) until I heard about the release of this book. I have a question regarding this book.

Is this new book going to be pretty similar with the previous book except with the addition of 3.5 technology...or is it worth getting the 2.0 book still along with this book? I like the previous version of this book from reading a few short pages but I wanted to know if this new edition will satisfy both. Thanks.

Dennis
January 19, 2008 2:38
There are a few chapters, like mobile, that are removed from this book, and will move online. You'll still be able to get to them, but this is similar + several hundred new pages and new code and new sceenshorts.