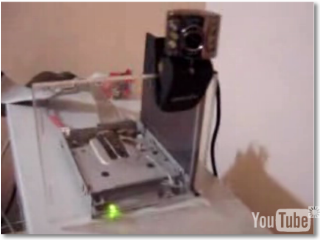 Here's a clever guy to watch, Ashish Derhgawen in New Delhi. He's an 18 year old student and he's a wiz at hardware hacks. I've been picking his brain about Coding4Fun ideas, and we might turn his laser-pointer obstacle dectector into an article. He's been getting into WebCams. He's just set up a Web Camera panner using the stepper motor of a Floppy Drive, controlled via the Parallel Port. Seriously, read that last sentence again and drink it in. I'll wait....

Take a look at the YouTube videos on his site. I "met" Ashish while talking about working on a Morse Code application with Ward Cunningham. We want to make a program that will notice an LED blinking Morse Code in a Video and then add decoded subtitles of the morse code as an overlay. Ashish started by getting an LED to flash using the Parallel Port as power and control (video here) and here.

Head over to his site and post a few comments of encouragement and/or ideas on his software, will you? I wish I was this industrious when I was his age. Only took me 15 extra years!