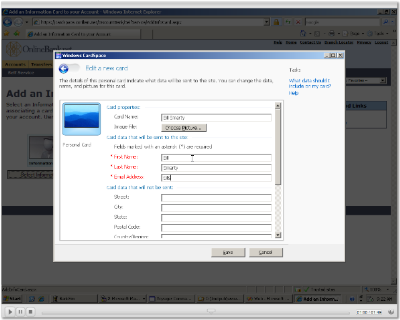 Perhaps I'm old-school, but we still do a lot of work on .NET 1.1. It's pretty clear that the technology is moving faster than the business, and you can't always run the latest stuff. Besides, 1.1 works very nicely, thank you very much.

While working on an InfoCard/CardSpaces integration project recently (screencast and Identity Podcast and WS-* Podcast) I asked Garrett Serack (nicely) of the CardSpaces team at MSFT to make me a TokenHelper (the code that opens up an Information Card after it's passed to the server from a client like Windows CardSpace) that would work in .NET 1.1.

My argument was/is that many folks who have .NET 1.1 ASP.NET applications might want to include integration with CardSpaces without necessarily moving the whole app to .NET 3.0. I told him I figured it was a few hours work, total, and that I was far too lazy to do it myself. He figured it was about 40 minutes work, being that he's on the team and all. Six weeks and three complete re-writes later, Garrett announces a functional .NET 1.1 Token processor that correctly processes SAML tokens from CardSpace. I encourage you to check it out.

Take a look at the stuff that Kevin Hammond has been doing at enabling DasBlog for Infocard as a comment/admin authentication method. I've really insisted that the DasBlog team (so far) support both .NET 1.1 and 2.0 for flexibility in hosting, and this tool from Garrett will also help us enable DasBlog for InfoCard without insisting on ISPs hosting .NET 3.0.

Brilliant and Kudos to all involved. Thanks Garrett!

I'm aware of several situations where larger companies are a bit slower in implementing newer technologies just because of some of the red tape involved...not to mention making it that much more cost-effective from a management perspective.