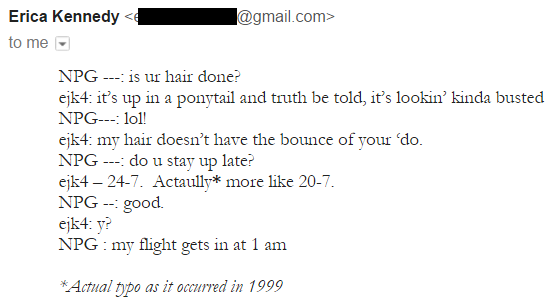 Before the Internet as we know it today, before social media, there was AOL. Specifically there was AOL chat rooms. The digital world was smaller but Prince was always there. He was so ahead of his time digitally. The Purple One did group chats with fans all the time on AOL. A "room" in AOL chat parlance was like a Twitter DM - a private chat room.

Six years ago my friend Erica Kennedy and I were talking about what she was going to write for her next book. She had just released her second book, Feminista, and was pretty well known for her first book, Bling that satirized the music industry that she came up in. We had the idea of  a Kindle Single detailing her interactions with Prince while she was working on a profile for InStyle Magazine. You can see photos of Prince's Spanish Villa and a few lines of Erica's AOL chats with Prince over at InStyle now.

This is the AOL chat log detailing her interactions with Prince that Erica emailed me while we were planning her novella.

Here, of course, "NPG---" was Prince's private AOL chat handle at that time while Ekj4 is Erica. I have kept all the typos exactly as they occurred in 1999.

but this way is modern

I loved these chats because they are a reminder that our legends are also real people. He loved technology, Prince started YesWeCode with Van Jones to inspire more Black Youth to get involved in tech.

I talked to Erica on the phone just two day before she passed away. I miss our regular talks and her energy but most of all I miss my friend.  Prince is gone now as well, and even though he was a legend he was also a real human who loved people. He was a tech visionary who appreciated very early on how technology could bring us all together.

20 years later Prince would still reply to fans directly on Twitter (and often delete the tweets, adding to his air of mystery.) He was known to even engage in lengthy private DMs with fans and superfans.

I love what InStyle said about these Prince's AOL chats.

I miss you two and what you brought to our lives. I'm glad we have your legacy and your work to remember you by.

RIP Prince. You are a King, now.

Awesome tribute, thanks Scott. Many have probably seen this, but here's another great one from Jennifer Hudson: http://m.youtube.com/watch?v=EmkctxgJBt0

David Cuccia
April 25, 2016 17:07
Yes, all celebrities are people too. It is amazing how important it can be to be a person to someone rather than just an image. We tend to get attached to people. Images we gush over but if something bad happens, we don't always want to help. If Bill Gates blogged like he does now would Microsoft have ever become the "evil empire"? I don't know. I would like to think people would have just seen him as flawed and human.

We still need more black people in tech. I am glad he pushed for that.

It is a real shame about Prince. My mom and brother saw him in concert. He was a great man. He will be greatly missed.

Now there are Chatbots :)