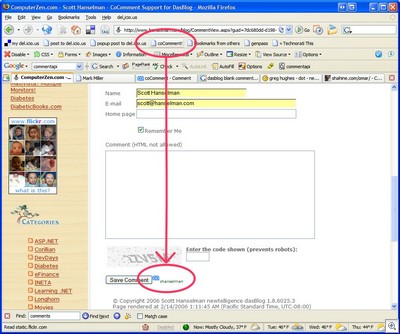 I just checked in CoComment support for DasBlog. If you want it, feel free to get the source for DasBlog via anonymous CVS after it syncs on SourceForge. Otherwise, it'll be out soon in a DasBlog 1.9 release after we get BlogML support finished (started).

CoComment is the blog comment aggregation service that everyone is all agog about. It's interesting that so many blogging services are so willing to include a javascript bookmarklet hack into their blogging engines rather that include RSS Comments support.

CoComment is clever, sure, but it's a screenscraping web-based comment aggregator that is doing the work that FeedDemon and other aggregators SHOULD be doing. SharpReader does a lovely job supporting RSS Comments as does RSS Bandit. They also support the CommentAPI (which does have one BIG problem.) Again, doesn't all of this seem simpler than CoComment's method?

DasBlog supports RSS Comments out of the box, but I think we have a few problems around GUIDs internally...however, only Luke has ever complained to me.

RSS Comments is a great idea that would solve this problem that CoComment aims to solve. I didn't/don't need another Web 2.0 application when there's a perfectly good spec waiting to be implemented. End of rant.

don't you just love doing that ;-)

Ian
February 14, 2006 20:43
ReverseDOS will stop CommentAPI spam - it checks all incoming requests for spam patterns (regexes) and blocks them when it finds them - so any POST or GET is going to be covered (regardless of the transport).

(and yeah, I guess this is comment spam ;))
http://www.angrypets.com/tools/rdos/
(check out the testimonials page to get an idea of how well it works)

My walk through CoComment was pedestrian at best. I dislike the interface and would rather leave my comments where they belong - with the original content.

Allowing those comments to then be aggregated is a better solution. Why should das have to support CoComment? With comment aggregation, CoComment could simple support standards.

David Starr
February 14, 2006 22:08
Another problem with CommentAPI is that it doesn't work well with Comment Moderation. http://haacked.com/archive/2004/09/13/ImprovingTheCommentAPIAndCommentModeration.aspx

haacked@gmail.com (Haacked)
February 15, 2006 9:53
I eagerly await the addition of the magic "notify me of new comments to posts that I'm interested in" feature that's supposedly coming with the next releases of RSS Bandit. I'm amazed this feature isn't in every aggregator already - it would certainly make CoComment less interesting if it was.