CodeMash 2008 Wrapup - What are you working on? 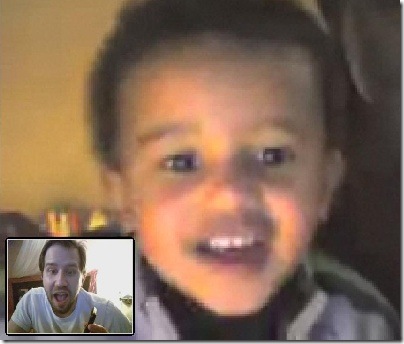 Thank Goodness for Video Calls. Even though I'm at CodeMash in Ohio, I got to see the family over Skype at a sprightly 640x480 fullscreen video and Z loves it.

I hate traveling away from the family, but it is nice to be welcomed when I do travel. The folks at CodeMash have been very welcoming and they put on a very unique conference out here.

It's a cross-platform, cross-cultural, cross-language conference with a very positive vibe. The "vibe" or general feel of a conference matters more than you might think. I started out asking folks "are you a Ruby person or a .NET person?" but soon I got with the program and started asking folks "what are you working on?"

Everyone is using everything, every tool, every IDE, every platform, doing whatever they can do get the job done. Folks might do C# for their day job, but play with Scala on the side. They might work on Python for a day job but use Linq and VB for a church website.

It was such a positive attitude, it was extremely inclusive. People were encouraged to avoid talks about technologies they were already familiar with, with .NET folks checking out things like Dojo and Groovy on Grails. Never heard of these techs? You would at a conference like CodeMash or the ALT.NET Conference.

I came to hear talks and give a talk, but my goal was to meet and talk to as many people as possible. I tried just wandering around and chatting with folks, but found that after the organizers put up a "Rock Band" kiosk, that hanging out there was the best way to meet everyone! It was a gravity well, pulling in virtually the whole conference. I can't play Guitar to save my life, but I can play drums (and cowbell) on The Blue Oyster Cult's Don't Fear The Reaper. A young lady from Pakistan had never heard of ANY of the songs (I had only heard of 2, since there was no "Kool Moe Dee" option) but with some coaxing tried the drums and was soon jamming away and having a blast and we had a fine conversation about her projects. If you're putting on a conference, nothing brings a sorts of people together like a game like this.

I gave a talk on IIS7 and PHP using Mike Volodarsky's great MSDN article as a jumping off point and it went very well, although I did have one programmatic OutputCaching demo not work, so I used declarative instead and it worked great. I'll post-mortem later. You never know with these things, it could have been something as simple as not resetting IIS. I also got a chance to do about 20 minutes of "Programmer Standup Comedy" which was, happily, well-received. I'm often silly in talks, to be clear, but it's been a while since I've done standup, and while some silliness I did at the recent PNPSummit did OK, the energy of the CodeMash conference was so upbeat that I felt comfortable doing the first chunk of my talk as schtick. Conferences and their endless presentations can get dull and since this was a lunch keynote it seemed well-timed and helped wake people up.

All in all, a great time was had by all. I hope more conferences start "mashing" it up. It's no fun to be away from home, but it's much more tolerable when topics are so varied as these and the environment is positive and inclusive.

At least we know where Scott sides on the Kool Moe Dee/LL Cool J debate.

Partha
January 11, 2008 20:18
Next Live at the Comedy Stop.... Scott Hanselman will make your belly laugh with funny .NET musings, he will twist reality with his Python Ruby gag, and generally have a good time discussing LINQ in all its hilarity....

I would even pay the two drink minimum to see that...

I've tried using Skype for video conferencing when away from the fam, and found it's quality on the Windows platforms to be terrible compared to MSN Messenger.

I have found Yahoo Messenger to be slightly worse than Skype.

What is your mileage on the video calls with the IM clients?

Jeff Fritz
January 11, 2008 22:13
The first twenty minutes of your presentation were hilarious. I lost it on the LOLCode bits.

The only downside was trying to explaining it to my fiancee. "Well, there are these cats.. and uh, they want cheeseburgers... and uh... you know how Microsoft has a reputation for being... well... Never mind. Just trust me when I say it was funny."

The IIS 7 stuff was good as well and I think the new features will definitely be worth the investment.

Rich Reuter
January 11, 2008 23:55
Hey Scott, it was nice having you at Codemash and playing Rock band with you. That was a sweet set up, and nice job with the cowbell! :)

Greg Huber
January 12, 2008 1:20
Scott is too humble and forgot to mention the time he picked up the mic for rock band. I swear I heard a choir of angels singing! Pictures to prove it:

Scott Walker
January 12, 2008 6:33
The standup bit was outstanding. I hope we can rope into coming again next year!

MikeWo
January 12, 2008 7:26
Scott - both your presentations where awesome. Thanks for taking the time out of your schedule and join the conference!

Nate Hoellein
January 12, 2008 23:24
Scott - Honestly, after I left the conference I had one major complaint. Where was the video camera for your standup? I actually looked around the room after you were done hoping to find someone with a video camera, as I could watch that over and over. I was in tears from laughing so hard watching that. Everyone I talked to had the same opinion. The IIS7 presentation was outstanding too, but the first part was off the charts.

If you ever do that again, make sure somebody has a video camera!

It was great to meet you at the conference too, even if you did tell me that everything I do sucks!

matthew
January 14, 2008 17:41
I agree with all of the above! Your keynote had me rolling with laughter and then jumping into IIS7 to try out some PHP.

If you can make it to another CodeMash, you'll be welcomed with open arms!

Christopher Bernholt
January 14, 2008 20:16
Scott - It was great meeting you at the conference! I really enjoyed your entire presentation, standup and all! I look forward to seeing how IIS7 works with Subversion :). Thanks for your participation, it definitely made a great conference all that much better!

Joe F.
January 23, 2008 3:33
Scott - you captured the conference vibe very well. That's exactly the vibe that we've been striving for. We are working on plans for 2009 already and trying to make sure that we don't upset apple cart. Any thoughts you can give on how to keep that feeling flowing would be greatly appreciated.

Also, this being our second year doing it - it was definitely a much more mature movement this year with a lot more interaction.

Thanks for coming and we hope to see you next year. Bring the family (if they can come) and hit the water park...

Josh Holmes
January 24, 2008 6:46
Scott - I'm in Siberia right now and my family is in Ohio. Skype is the bee's knees for keeping in touch. Much better than all the alternatives I've found. The wife is using a MacBook and I'm on a Tablet... no problems, just good family interaction with the kids!

By the way, you rocked out that Rockband Drum Kit and even the Guitar for the most part. :) It was very nice to meet you and to jam with you on some of those songs. :) I do hope to see you at next year's event, even if only to bring your mad-drum-skills. :)