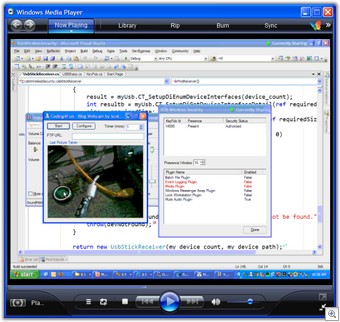 A few months back I did a Coding4Fun Hardware Webcast. I'll probably do a few more, but for now, I just noticed that it's available offline.

You can download the Webcast as a WMV. You don't have to get the Live Meeting Player unless you want the better quality output.

You have to jump through a few Passport hoops to get to it, but considering that it was a Webcast about Hardware, it's pretty good. I use the Webcam to take photos of what I'm doing, so you get a pretty good idea of what's up. It's more code and demos than slides.

All the demos and code are based on Coding4Fun articles from my column "SomeAssemblyRequired" there. I have two articles in the hopper I've already turned in with two more on the way.

Dan Fernandez has blogged that he's having trouble keeping up, but they are in the middle of a V2 of the whole Coding4Fun site. Be sure to visit his blog and give feedback on what you think can be done to make the site better. There's definitely a Hobbyist Renaissance at Microsoft right now. I'm having a blast, as I hope you'll see in the next four articles where I interface .NET with lots of hardware, some years old, some brand new, some robots and some bar code readers. Very cool stuff.

You wrote a good article about Globalization and I was wondering if i could ask you a question?

How or Where can i get the ISO 3166-1 numeric country code from either the Culture or Region Info classes or some other class?

And how can I get the correct CultureInfo if I have the RegionInfo.ISOCurrencySymbol?